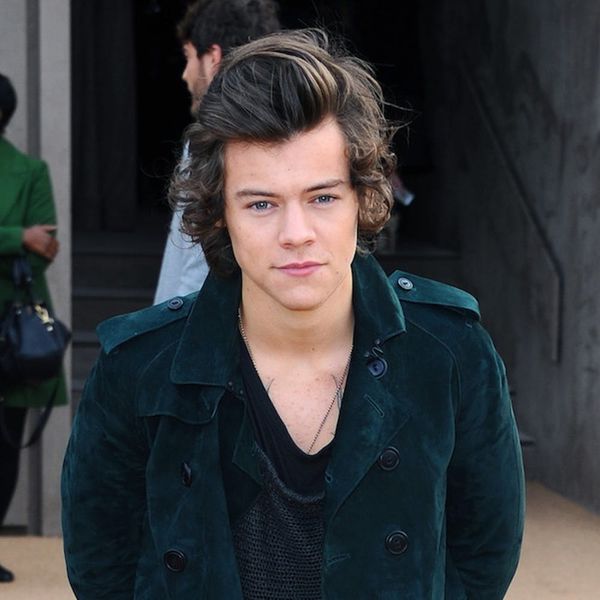 It’s no secret that the time Taylor Swift and Harry Styles spent together inspired a few of the bangers on Swift’s 1989 — both “Style” and “Out of the Woods” are supposedly about their short-lived romance, and given Swift’s track record with breakup songs, there’s no reason to doubt the speculation (also, c’mon — the song is called “STYLE”). Aside from some Twitter shade directed toward Swift late last year, Styles has remained completely silent on their relationship — until now.

In a new Rolling Stone cover interview, Styles dishes some sweet insight into the fated romance. “Certain things don’t work out,” he said. “There’s a lot of things that can be right, and it’s still wrong… Meeting someone new, sharing those experiences, it’s the best shit ever. So, thank you.” Wise, if not still slightly cagey, words, but it’s what Styles said about the Swift content of his new album that has us dying, waiting for its May 12 release.

“In writing songs about stuff like that, I like tipping a hat to the time together. You’re celebrating the fact it was powerful and made you feel something, rather than ‘this didn’t work out, and that’s bad,'” he said. After performing the song “Ever Since New York” on SNL recently, fans have been clamoring trying to figure out if it’s about Swift. The pair spent some of their earliest dates there together (who can forget the famous pic of them strolling through Central Park?), and some of the lyrics suggest specific locations as now lonely memories.

In the Rolling Stone story, the writer also details lyrics of another unnamed new song that say, “Couldn’t take you home to mother in a skirt that short/But I think that’s what I like about it … I see you gave him my old T-shirt.” Um, do these lyrics not sound like a subtle nod to Swift’s short skirt/t-shirt lyrics in “You Belong With Me?!” Hmmm.

But before we can get too ahead of ourselves, Styles admits that most of the album is about another serious relationship that’s been a big part of his life the past few years — maybe Kendall Jenner, who he’s been on-and-off linked to? “She’s a huge part of the album,” says Styles about the mystery woman. “Sometimes you want to tip the hat, and sometimes you just want to give them the whole cap…  and hope they know it’s just for them.” Um, dying.

We may not get as much Swift goss as we wanted out of this album, but it’s for sure going to have a lot to dig into — and we can’t wait.

Who do you think Harry Styles is singing about on his new album? Let us know @BritandCo!