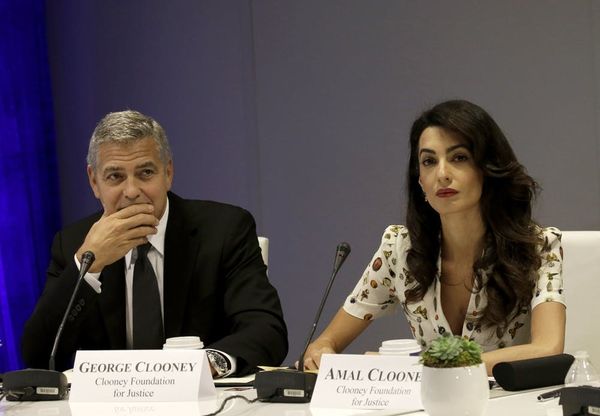 There has been quite a bit of chatter about Amal Clooney’s famous actor husband getting all the attention when Amal’s work as a human rights lawyer really should be what takes center stage. But today on BBC News, Amal told reporter Fiona Bruce that she doesn’t mind the attention he gets — because it helps bring attention to the causes she’s championing.

“I think if there are more people who now understand what’s happening about the Yazidis and ISIS,” she said, “and if there can be some action that results from that, that can help those clients, then I think it’s a really good thing to give that case the extra publicity that it may get.”

Amal is representing Nadia Murad, a survivor of ISIS and a Nobel Peace Prize nominee. It’s a landmark case because Nadia is acting on behalf of thousands of Iraqi Yazidis who are being enslaved, raped, and murdered by ISIS. According to a 2014 UN report, more than 5,000 men have been killed and over 7,000 women have been held captive, solely because of their religious beliefs. Nadia was tortured, raped, and beaten while she was held prisoner by the terrorist group in 2014. Now she’s joined forces with Amal to raise awareness about such human rights violations, and to urge the International Criminal Court to prosecute the crimes committed by ISIS commanders. (Nadia has also launched a public initiative on behalf of female genocide victims called I’m With Nadia.)

In September, Amal appeared on NBCNews to draw attention to Nadia’s plight, voicing her opinion on the matter in no uncertain terms.  “I think the international community should be ashamed that they haven’t done more for the Yazidis.”

When asked for her husband’s take on the matter, Amal responded without missing a beat.

“He met Nadia too, and I think he was moved for the same reason,” she said. “He understood I have spent my career working on international justice and this is a clear case of genocide and genocide that’s gone completely unaddressed and ignored.”

What’s your take on Amal’s sitch? Tweet us @BritandCo!

Amanda Buckiewicz
Amanda Buckiewicz is a TV producer and writer based out of Toronto. Her claim to fame is producing live interviews with astronauts on the International Space Station, and getting beat up by a bunch of aerial Asian Carp. She spends a lot of time worrying about climate change, shark conservation, and where to find the best moisturizer for her combination skin.
marriage
Politics
marriage Politics