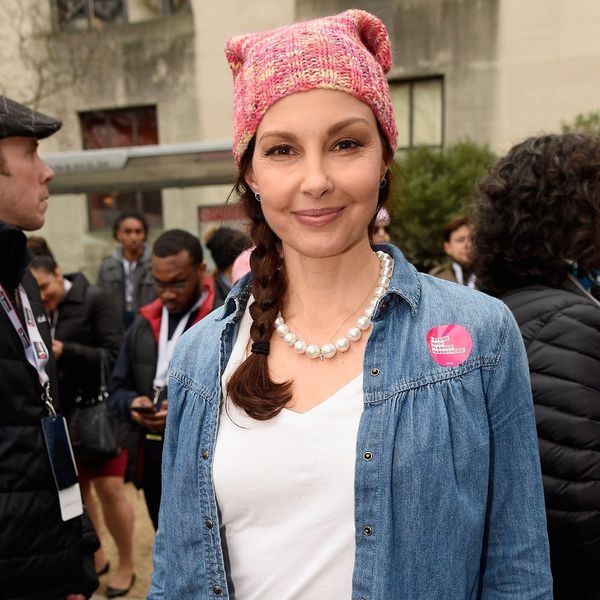 While there was no short of utterly inspiring speakers at today’s record-breaking Women’s March in Washington (find some of our favorite quotes here!), including such influential women as Gloria Steinem, Scarlett Johansson and America Ferrera, it was Ashley Judd that had the world’s full attention.

From the very moment she took the stage, busting into the middle of Michael Moore’s speech, girl was fired up and raring to go, and boy, did she have a lot to say!

“My name is Ashley Judd, and I am a feminist!” she began.

From there, she gave the performance of a lifetime as she read a stirring, if controversial poem from a 19-year-old Tennessee woman named Nina Donovan.

Pointing out that supplements, such as Viagra and Rogaine, for “embarrassing” men’s issues, were not, in fact taxed, Ashley asked the crowd, “Why is the bloodstain on my jeans more embarrassing than the thinning of your hair?”

Ashley Judd: "Why is the bloodstain on my jeans more embarrassing than the thinning of your hair?"

She also addressed fellow speaker Scarlet Johansson, who has openly tackled the wage gap in Hollywood in the past. “Scarlett Johnasson, why were the female actors paid less than half of what the male actors earned last year?”

Some were absolutely living for her impassioned speech, rooting her on in real time…

Didn't think I could 💗 @AshleyJudd anymore than I did, until today. I feel like I finally have the big sister I always wanted. #WomensMarch

.@AshleyJudd is owning this crowd with her #nastywoman speech. #WomensMarchOnWashington. All the way back to 14th st, 11 blocks from stage

Ashley Judd got better bars than most rappers

I'm so proud of Ashley Judd ❤

.@AshleyJudd Few times did I hear such a deep, brave and motivating speech as yours in #WomensMarch. Thank you, from a white man from Spain

Others, however, thought the poem took it wayyyyyyy too far with some of the lower blows it threw the President’s way, which included controversial comments on his appearance (“I’m not as nasty as a man who looks like he bathes in Cheeto dust”), his family members and unfavorable comparisons: In fact, they were downright disgusted.

Ashley Judd, what makes your wet dream comment any different from Trump's pu**y comment? Oh, I know, he said 11 years ago in……

@AshleyJudd Proves she has very ugly things on her mind. She seems crazed.

@AshleyJudd Speak for yourself. You do not represent the entire world of women!

Ashley Judd was brought up better than this. What she said said about #IvankaTrump and her father is just wrong! https://t.co/Fd6her8VMa

One thing’s for sure: It’s a speech none of us will be forgetting anytime soon.

See the full speech in its entirety below.

What was your take on Ashley’s words? Tell us over @BritandCo.

Nicole Briese
Nicole is the weekend editor for Brit + Co who loves bringing you all the latest buzz. When she's not busy typing away into the wee hours, you can usually find her canoodling with her fur babies, rooting around in a bookstore, or rocking out at a concert of some sort (Guns N' Roses forever!). Check out all her latest musings and past work at nicolebjean.com.
Controversy
Celebrity News
Controversy Politics
More From Celebrity News