What Would The Dude Order at a Fiesta? 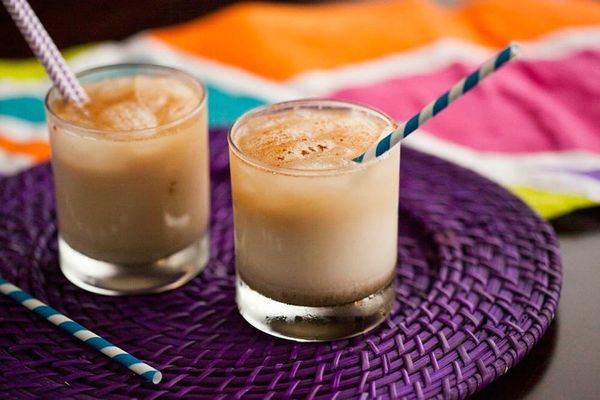 We all know what The Dude would order if he walked into a bar, but what about a fiesta or Dia de Los Muertos party? Well, if you’ve ever been perplexed by that question, we have your answer. Put on put on your bowling shoes, kick back, relax, and enjoy our Horchata White Russian.

Don’t know what Horchata is? We’re glad you asked. Horchata can refer to any “milk” made from seeds, nuts, or grains. The kind of Horchata we’re referring to is the Mexican version, which is traditionally made with rice, water, sugar, cinnamon, and vanilla. We drew inspiration for our basic Horchata recipe from Aaron Sanchez of the Food Network.

1. Blend milk and rice together until finely chopped. Let mixture sit for 2-4 hours.

3. Fill four glasses with ice. Add 2 ounces vodka, 1 ounce Kahlua, and 2 ounces of Horchata to each glass. Add a dash of cinnamon and serve cold!

Start by gathering your ingredients (only 5!).

Pour one cup of rice into the blender.

Followed by four cups of water.

Turn on the blender and let ‘er rip! No really, blend it good.

Now comes the waiting. Let mixture sit for two to four hours. Then strain through cheesecloth or a fine sieve.

Add 1/2 cup sugar. This will add a little bit of sweetness but not too much. Remember, this is the “cream” for your White Russian.

Then add one ounce Kahlua.

Finish off with a sprinkle of cinnamon and you’re done. The Dude definitely abides.

What are your favorite drink recipes? Let us know in the comments section below!

Sarah Jones
Sarah is a former Brit + Co-er who is the woman behind Miss Jones Baking Co., a modern American baking brand and maker of the first-ever organic ready-to-use frostings and complementary line of organic baking mixes.
Drink
DIY Recipes
Drink Spike Your Sweets
The Conversation