How to Get the People Around You to Vote 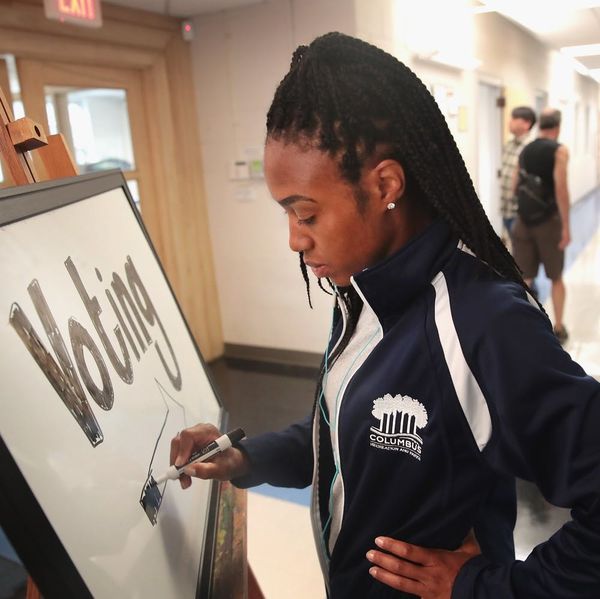 If you were bothered by voter apathy among your friends and family in the 2016 election, then be warned: Voter turnout is consistently lower in midterm election years.

Of course, these aren’t exactly normal times. People who may once have seen little purpose in taking time out of a busy workday to go to the polls might have since felt a strong emotional reaction to seeing photos of migrant children in cages, or more recently, watching the president and prominent senators malign a woman for speaking up about an alleged sexual assault. Traditional non-voters across the political spectrum may finally recognize the very real impact that voting — or not voting — has on society.

In other words, this year could be a turning point for getting out the vote, regardless of anyone’s party alignment or history of non-participation. There’s so much more to elections than voting for any one candidate, and there’s so much more to elections even than voting alone. If you’re trying to mobilize the people in your life to get out the vote this November — or just be civically involved citizens in general in these coming weeks leading up to the election — consider raising these points in your conversations with them.

Don’t think of voting in terms of political parties. As likely future-Congress member Alexandria Ocasio-Cortez so aptly put it, “Our swing voter is not red-to-blue. Our swing voter is the voter to the non-voter, the non-voter to the voter.” Bringing up political parties can reflexively push away people who disdain politics. Instead, start by asking your friends and family about the issues they care about, and the change they’d like to see in their lives or the lives of their loved ones. After listening to them, try to refer them to organizations, candidates, or ballot measures that are relevant to these issues as a starting point, and encourage them to research and learn more.

Even the most diehard people who loathe “politics” surely care about something — traffic or noise pollution in their neighborhoods, crime, clean water. And every issue you could name, no matter how seemingly local or low-key, could be on our ballots in some way or another this year. For better or for worse, politics is inseparable from everyday, real life. We just need to show people this.

Voting is the moral thing to do. Sure, reminding people who traditionally steer away from voting of how elections have the potential to impact their day-to-day lives is a crucial starting point. But it’s also important to show people that elections and democracy are about so much more than us, as individuals, and we have a moral obligation to vote not just for ourselves, but for all the people who can’t vote, or could be powerfully impacted by the results of a particular election.

It’s no exaggeration to say that the outcomes of some of the elections taking place across the country could decide whether immigrant families get to stay in this country, whether migrant families are reunited, whether women and low-income people have access to life-saving health care.

Regardless of whether you think any of that directly affects your everyday life, how you vote could change everything for marginalized groups in this country, as they face all kinds of barriers under this presidential administration. And that’s not to say the solution is to unilaterally demand your friends and family vote for Democrats. The solution is to get them out to vote, period: for ballot measures and initiatives, for school board members, for mayoral candidates, for state-level legislators, for everything.

For those of us who can vote, voting should the bare minimum. From volunteering with community organizations to help register people to vote and drive them to the polls, to volunteering for political campaigns, there’s an infinite amount of ways to get involved in elections, and for those of us who can vote, actually voting should be the bare minimum. Considering the myriad barriers to voting rights that disproportionately affect people of color and trans and non-binary people across the country, we should all remember what a privilege it is to have the right and ability to vote, and have a say in what happens in our communities.

Remind the people in your life that voting is power, and if they have the ability to vote, it’s the least that they or any of us can do.

We give up our power by believing we don’t have any. Activist and writer Alice Walker once said, “The most common way people give up their power is by thinking they don’t have any,” which is a perfect summary of the crisis of democracy the United States has struggled with in recent years.

Sure, it’s completely fair to feel powerless sometimes. Democracy has been chipped away by myriad institutional factors, like repressive voter ID laws, politically motivated gerrymandering, a broken criminal justice system that shuts out a sizable population from the polls, and the over-influence of special interest groups in campaigns. The existential problems our society faces can seem too far gone for any of us as individuals to have an impact.

But change has to start somewhere, and often, it starts with individuals who recognize their power and take tangible, day-to-day actions to work toward a specific goal. Whether we vote or don’t vote certainly makes a difference. It’s up to all of us whether we want that difference to be positive or negative.

The political miracles we’ve seen since Trump’s election were all fueled by individuals. From Doug Jones’ upset special election victory in Alabama last year to the women across the country who have been shattering barriers in their primary wins over the past months, the most surprising and groundbreaking electoral outcomes in the Trump era have all been won by individuals who historically don’t vote showing up at the polls. We’ve also seen numerous races in long-held Republican districts become suddenly highly competitive for Democrats, and in special election after special election, we’ve watched the result come down to a handful of ballots.

Nothing is impossible in this current political moment, and conversely, everything is possible when people show up and realize their political clout as individuals.