This Is How Happy Couples Argue 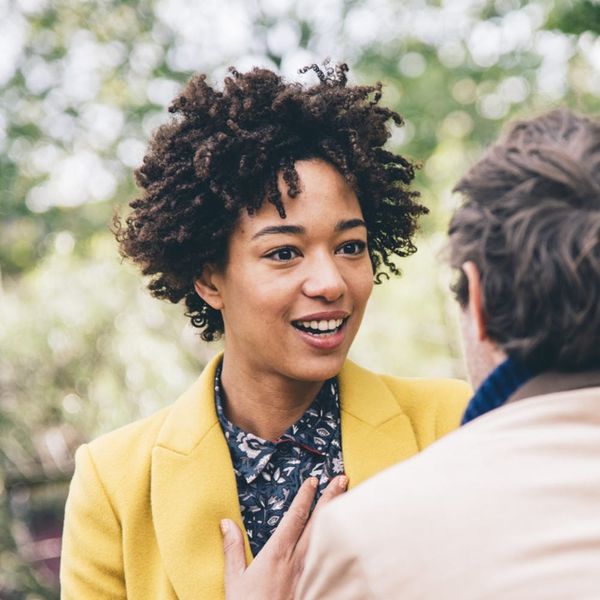 Unless you happen to have been the captain of your high school debate team or are otherwise just extremely prone to “spirited discussions,” it’s probably in your basic nature to avoid arguments. A nasty fight can leave tension in a relationship for days on end, and there’s no one that really feels good about getting into it with someone they care about. Call us oversensitive, but just thinking about an argument gives us a little bit of a stomachache.

But here’s a plot twist for you: According to a study about communication in relationships conducted by VitalSmarts as a follow-up to the New York Times bestselling book series Crucial Conversations ($20), the right kind of arguing is far from a death sentence in a romantic partnership. Couples who engage in healthy conflict are actually 10 times more likely to have a happy relationship than those who ignore difficult conversations, per their research, which surveyed nearly 1,000 people about how they communicate with their significant others and how happy they were in their relationships.

“The best predictor of relationship success is not how much we have in common,” Crucial Conversations co-author Joseph Grenny tells us. “It’s our ability to talk about differences. In the absence of good, strong communication, all the mischief happens.”

The value of productive arguments is also rooted in the satisfaction that comes with bringing resolution to conflict. “There’s this anxiety prior to having a hard conversation, but if we know how to have it well, there’s a sense of release,” Grenny says. “It’s almost euphoric. Boundaries drop and vulnerability comes with that, which creates a sense of connection and intimacy that’s unparalleled.”

No one’s advocating that you and your special someone start engaging in intense brawls on the reg, but constructive, well-handled disagreements can really pay off in the long run. Here are five tips from Grenny and Maxfield that will help you argue with your S.O. in a way that might actually make you happier.

1. Manage your thoughts. Take a step back and make sure you’re not jumping to unfair conclusions. At your calmest, how would you react to the situation you’re facing with your partner? It’s totally understandable that you might not actually be at your calmest under challenging circumstances, but if you take a hot sec to consider what that other version of you would do, you’ll be less likely to say something you’ll regret later on.

2. Affirm before you complain. Lead with the positive! Before you start running through a list of all of the things your S.O. has been doing lately to drive you crazy, share a little positive feedback. Make sure they know that this is an issue that you want to work through because you love them, rather than one that’s likely to drive you apart.

3. Start with the facts. It’s tempting to start with statements about how you feel, but a more effective way to go about a conversation like this is to be more straightforward. The less emotional you are with your language, the easier it will be to avoid unfair accusations or the kinds of accusations that will leave your partner looking like the shrugging emoji.

4. Be tentative but honest. Once you’ve laid out the facts, it’s time to state your concerns. Share these as opinions, not as accusations. This goes back to starting with “I” language, rather than “you” language. “I feel like you haven’t been making enough time for me lately” sounds a lot less inflammatory than “You never bother to spend time with me anymore!” See what we did there?

5. Invite dialogue. You can’t have a conversation with yourself because that would be incredibly boring. Once you’ve finished sharing your thoughts, it’s time to let bae do the same. You should prepare to hear a perspective that’s much different than your own — and consider using the other four tips we mentioned to help you respond to those disagreements in a productive way.

“You’ll always get there as long as you hang in there long enough,” Grenny says of challenging conversations like this. “It might look scary along the way — sort of like a bad skier going downhill. But you know what? You’ll get to the bottom of the hill. You’ll be okay.”

Do you find that arguing makes your relationship with your partner better? Tweet us @BritandCo!

Alli Hoff Kosik
Alli Hoff Kosik is a freelance writer who is passionate about reading, running, rainbow sprinkles, her lipstick collection, watching embarrassing reality TV, and drinking pink wine. She lives in Brooklyn with her husband and (in her dreams, at least) three golden retriever puppies. Listen to her talk books on The SSR Podcast.
Dating
Relationships
Dating Relationship Advice study