10 Words You Should Never Say During a Fight 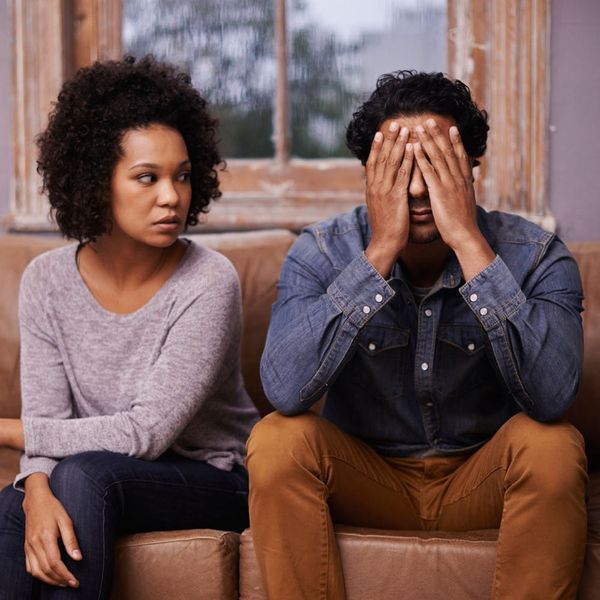 Sticks and stones can break your bones, but fighting words can sometimes hurt the most — especially coming from someone you love. Conflict is inevitable in any committed partnership, and knowing how to communicate well can save your relationship from a breakup. Learning how to turn arguments into heartfelt discussions filled with intimacy (AKA the happiest relationship ever) is definitely one of our relationship resolutions. To learn the secrets behind diffusing the roughest spats, we turned to three relationship experts who’ve seen their fair share of lovers’ quarrels.

1. Calm down. Telling your partner to cool it, particularly when the conversation is already heated, comes off as an attack on their behavior. Relationship expert Michelle Brody, author of Stop the Fight!, recommends calling a mutual time out to allow the discussion to get back under control. It’s best to take some responsibility (phrases like, “I’m having trouble thinking clearly,” or, “I must not be understanding you,” work well), and try to understand why the other person might have reacted so strongly to what you said.

2. You’re out of control. Accusatory statements like this one escalate the situation.”Two people can have very different ideas of what normal could be,” dating and relationship coach Lisa Shield says. A variety of factors, from their family background to their personal history with confrontation, can affect how your mate treats conflict. “Some families are very loud and they yell or scream and that can become someone’s normal,” she says. If they’re talking or behaving in a way that’s frightening to you, gently ask them to lower their voice.

3. You embarrassed me. One of the positive things about being in a committed relationship is you have an opportunity to self-improve. Relationship therapist Rachel Sussman says a key part of that is giving loving, constructive criticism. “It’s never going to work out well if you scream it out,” she says. “Bring it up the right way, even in a complimentary way, and you could have a real moment of intimacy instead of a fight.” If your partner’s behavior really did embarrass you, it’s much better to approach them after the fact (especially if it’s late or they’ve had too much to drink) and express your concern. Chances are they didn’t mean to hurt your feelings.

4. You’re wrong. Painting things in black and white can make your partner feel attacked or criticized. “Whatever it is, from their perspective, they’re doing it for a good reason,” Michelle says. Start with admitting that they had good intentions, but that you’d like a different result. “It’s a much more mutual way to raise the issue because there’s no accusation in there,” she says.

5. Let me give you some advice. While the intent to help your partner is good, heavy-handed advice can come off as extremely condescending when your mate feels bruised. “Even if you’re doing it in the kindest of ways, your partner is going to pick up on it if something smells of judgement,” Michelle says. Offering your guidance as a suggestion or even a question lets your partner come to their own conclusion.

6. Always/never… anything. Sprinkling in hyperbolic words intensifies those threats on your partner, which can make the damage much worse. In addition to being a tad over-dramatic too (come on, is he really always late?), you’re making a harsh statement about their identity as a person — and nobody likes that. When you’re explaining an action that hurt your feelings, use gentle qualifiers like “sometimes” or “recently” to reflect behaviors that you’ve noticed.

7. But… anything. It’s better to begin any conversation with positive feedback. “It’s like planting a garden, and the first thing that you have to do is prepare the soil with some nice things,” Lisa says. Use “and” to bring up related ideas rather than canceling out their good qualities with “but.”

8. Don’t do that. No one likes to be bossed around. Shield says posing your advice in questions like, “Do you think that’s a good idea?” allows your partner to reason out the issue and make their own choices. State things in the positive, and ask for what you want instead of what you don’t want — which could come across as condescending. Rachel finds that when couples make suggestions rather than bark commands, both sides have the opportunity to make their thoughts known.

9. I hate you. We can all get caught up in the heat of the moment, but when someone shouts out a nasty word, sometimes you reach a point of no return. The damage of curse words can far outweigh what the argument is about. “I don’t think anyone feels good about themselves after that,” Sussman says.

10. Don’t forget about your body language. Usually a person’s tone of voice or body language can kick off a misunderstanding. “Conflict comes from resistance,” Lisa says. Think about keeping your arms and legs uncrossed to foster an open impression. “If you’re kind, sweet and loving with one another, you don’t have to be fearful or guarded.”

How do you keep things fresh with your S.O.? Tweet us your tips @BritandCo!

Ashley Mason
Ashley is a freelance lifestyle writer based in Brooklyn. Since 2009, she has been drinking her way through the city’s diverse coffee shops. When she’s not hunched over her laptop, she can be found trying new restaurants and playing with her Beagle mix Signe.
Celebrity Breakups
Relationships
Celebrity Breakups Dating love