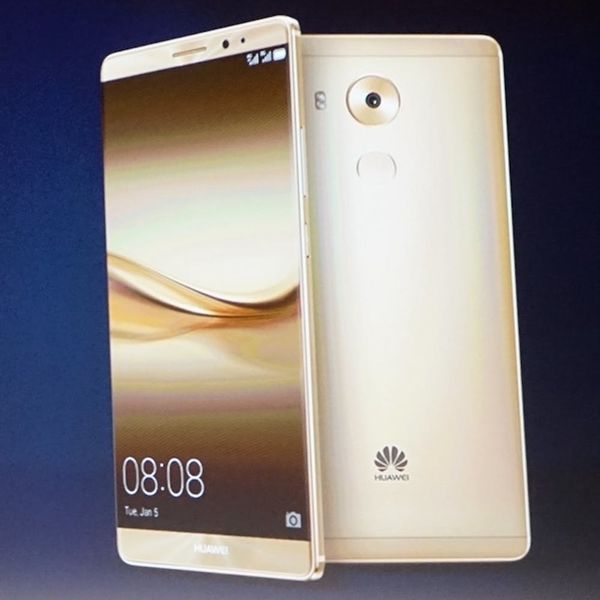 This year at CES, there’s a whole world of smartphones being introduced that definitely isn’t the iPhone — in fact, these phones have features that not only go head-to-head with Apple’s latest generation, but even knock it out of the park. If you haven’t heard of Huawei yet, you’re about to. Huawei is a Chinese telecom company behind the Google flagship Nexus 6P and they just announced a brand new phone that makes the 6S look kind of like a tinker toy.

It’s called the Huawei Mate 8 (€599+) and quite honestly, it’s stunning. First of all, it comes in four gorgeous shades including a never before seen Mocha Brown color. Plus, its specs make the iPhone 6S Plus look puny. It’s only 80.6 mm by 157.1 mm (that’s about 3.17 inches by 6.2 inches), but thanks to its bezel-less (that is, rim-free) design, it packs a six inch display. If you thought your 6S Plus was big, this one is a full half-inch bigger.

Wait until you hear about the camera specs. While the iPhone only has a 12 mpx camera, the Huawei Mate 8 has 16 megapixels. Like, whoa. Aaaand it’s jam packed with all kinds of nifty features that smartphone users have never seen before, like the ability to use your knuckle to trace out a screen shot on your phone AND video clip editing with just the knock of two knuckles. You can even take a selfie with your fingerprint with the keypad right on the back of the phone. You have to see it to believe it.

We haven’t even gotten to the best part. The phone will last over two days of uninterrupted use. Low battery? What’s that? With a 4000 mAh battery, the Mate 8 gets a staggering 17 hours of HD video, 20 hours of 4G Internet surfing, 28 hours of 3G calling and 98 hours straight of music.

So here’s the bad news. While the Mate 8 is launching in markets around the globe, it’s not coming to the US and likely never will. The Mate 8 is still changing the game for smartphones everywhere, however, and with the intro of the Nexus 6P, Huawei will definitely be launching more phones stateside and soon.

And when they’re here, we’ll be ready.

Stay tuned for all the latest news from CES 2016 @BritandCo!