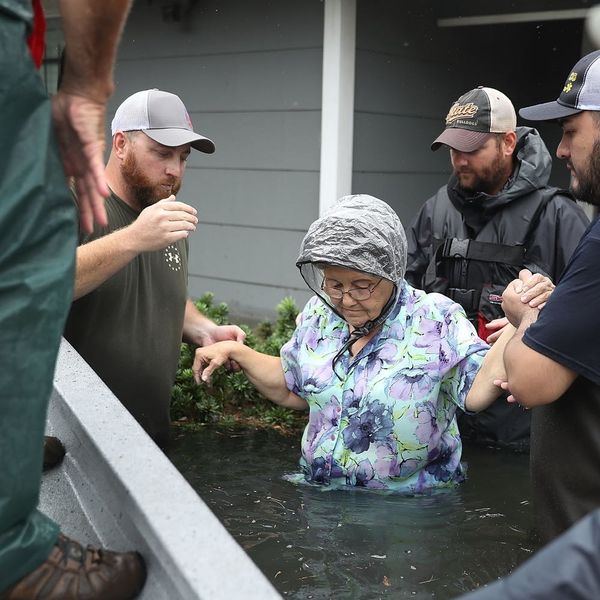 For a storm that came to an end almost one month ago, Hurricane Harvey continues to destroy lives. With many celebs donating money and time to disaster relief, and the ongoing ecological fallout from the storm mostly accounted for, many of the affected areas are well on their way to being rebuilt. Unfortunately, however, Harvey has claimed another victim: 77-year-old Nancy Reed from Houston.

According to The Houston Chronicle, Reed fell into flood waters and got cut, and with flesh-eating bacteria teeming in the water, Reed fell ill with necrotizing fasciitis, which eventually took her life. The infection — which is not common in the US — spreads quickly and is hard to treat, especially in elderly people.

According to the Chronicle, Reed was staying with her son in the Houston suburb of Kingwood when she fell, breaking and cutting her arm in the process. She was first taken to a local hospital, where doctors said her broken bone added to the quick spreading of the bacteria. She was eventually moved to Memorial Hermann Hospital-Texas Medical Center, where she died.

Reed is the second person in Texas to be infected with a flesh-eating disease. The first was the former firefighter, JR Atkins, who fell into floodwater in his hometown of Missouri City, Texas while attempting to rescue someone. He was successfully treated for the disease with three separate surgeries and multiple rounds of antibiotics and has survived.

While recovering in the hospital earlier this month, Atkins spoke with People, telling the mag that instead of evacuating town with his family, he wanted to stay behind. His experience as a firefighter, he believed, made him a worthwhile person in helping stranded victims of the hurricane. He has learned his lesson, however, warning, “Make sure you do everything you can to protect yourself [against infection]. If you’re not protected, don’t go out there.”

During the hurricane, the Texas Commission on Environmental Quality reported that over 33 million gallons of raw sewage overflowed into floodwaters, turning the flooding into a soup of toxicity. But there is good news, however: Refinery29 is reporting that the Texas State Health Department has not seen a mass of reports of necrotizing fasciitis post-Harvey.

During Hurricane Katrina in 20015, the CDC reported 50 cases of skin infection in evacuees.

Have you ever had to be evacuated during a storm? Tell us @BritandCo!