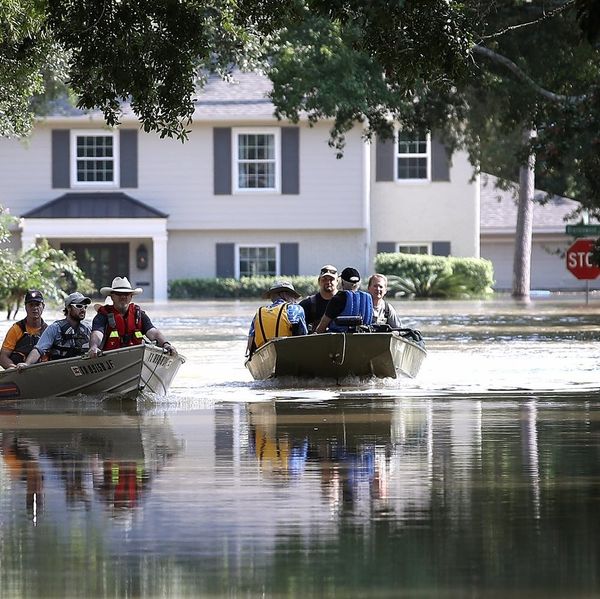 Update: A previously published version of this post reflected early speculation that safety controls at the Galveston Labs may have been compromised by the hurricane and subsequent flooding, including incorrect information about power shutdown within the labs. An August 31 statement from the Galveston National Laboratory refutes these reports, stating: “The GNL reported that the facility continued operations without interruption and did not incur any damage, loss of power or biocontainment during the storm. At no time was there cause of concern for the safety and security of GNL personnel, the research or the community.” Brit + Co sincerely apologizes for this error.

While celebrities are donating all they can to help folks in southeast Texas in the aftermath of Hurricane Harvey, years of poor environmental planning have left the state in a precarious situation. Texas is the home of the country’s petrochemical industry. With flooding wiping out entire towns and cities The Verge points out that another terrifying post-storm possibility is a bigger ecological disaster than the nation has ever seen.

The Gulf Coast base of Texas’ petrochemical industry has been called “The Chemical Coast” for many years, with Chevon, ExxonMobil, and Arkema (as well as others) all processing chemicals in area plants. In fact, the Arkema site is part of a surrounding community full of homes and small businesses, all of which had to be evacuated this week because of potential explosions due to the chemical peroxide the company produces on site.

In the wake of Harvey, Chevron’s sites have released hundreds of thousands of pounds of chemicals into the atmosphere, including nitrogen, propane, and carbon monoxide. These kinds of chemicals can cause breathing problems, create acid rain, and suppress the immune system. In extreme cases, these chemicals are known cancer-causing agents.

Within Harris County, where Houston is located, are a number of chemical-laden Superfund Sites. These areas in and around the city are highly contaminated and had already been earmarked for clean-up by the EPA. Unfortunately now, due to flooding, anything once housed in those dangerous sites are all but guaranteed to have been released into the environment.

Dr. Joel N. Myers, the founder, president, and chairman of AccuWeather, told Axios that Harvey is, “the costliest and worst natural disaster in American history.” Based on Myers research, AccuWeather is estimating that the impact of Harvey on the entire country’s gross domestic product (or GDP) will be $190 billion dollars, an entire one per cent of the country’s output.

“The disaster is just beginning in certain areas,” Myers said. “Parts of Houston, the United States’ fourth largest city, will be uninhabitable for weeks and possibly months due to water damage, mold, disease-ridden water and all that will follow this 1,000-year flood.”

With all these highly dangerous chemical agents in a state that is in the regular path of hurricanes and other weather related disasters, the state legislature has repeatedly refused to pass laws that would have strengthened infrastructure in order to avoid such a terrifying calamity from happening.

The reason? All the bills tabled included language on “climate change,” and the state’s then-Governor, Rick Perry (now Energy Secretary) is such a staunch climate change denier that he refused to entertain any part of a bill that mentioned the science around our increasingly dangerous weather.

Now that Harvey is losing momentum (and has been downgraded to a tropical storm), the storm will eventually peter out and flooding will subside, and at that time, the real work will begin in figuring out exactly how to solve many of the storm’s seemingly insurmountable damages.

Were you caught in Harvey’s path? Tell us @BritandCo!