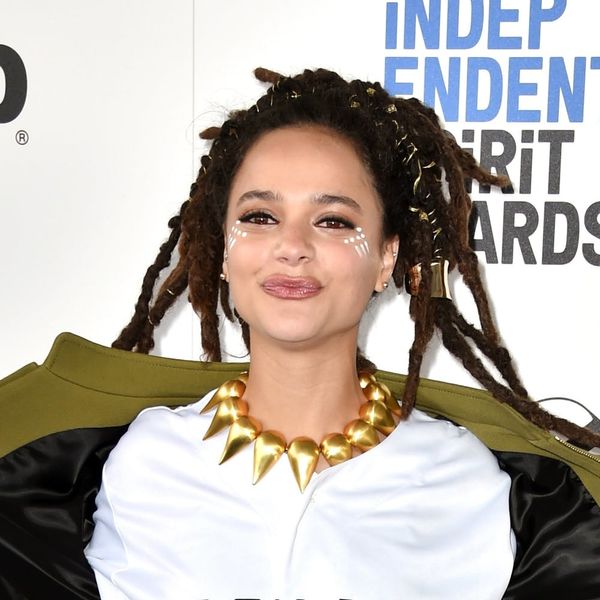 We’ve been seeing an interesting trend as of late with regard to celebrities and the red carpet. While some continue to go the traditional route, using the carpet to make a style splash, more and more have also been opting to use it as a platform to make a political statement.

First it was The Big BangTheory’s Simon Helberg and wife Jocelyn Town, who used their garb at the SAG Awards as protest of President Trump’s immigration ban, with Helberg carrying a “Refugees Welcome” sign and Towne baring the words “Let Them In” handwritten on her chest.

At the Grammys, it was singer Joy Villa making a splash, strutting down the carpet in a “Make America Great Again” Andre Soriano dress emblazoned with President Trump’s last name at the bottom. The singer has since said she intentionally wore the dress in direct response to the suppression she says she feels as a Trump supporter, an act she told Breitbart “should not be something that is almost illegal in this society.” She went on to tell the outlet via phone interview that she was “tired of the bullying. I was tired of being pushed around so that I couldn’t say my beliefs. And being fearful of losing sales. Losing fans. Losing bookings. Losing contracts and sponsorship.”

Tonight, at the Independent Spirit Awards, it was newcomer Sasha Lane (you might recognize her from her role in American Honey alongside Shia Lebeouf) letting her clothes do the talking in a $75 Mizizi “Black Lives Matter” jersey. The top appears to be a favorite of the actresses, who was spotted wearing it several times over in recent weeks.

If Lane’s look is any indication of how tomorrow night’s Oscars carpet will go, it looks like our prediction that this year’s awards will mark a turning point will be right on the money.

What do you think of Sasha’s look? Share over @BritandCo.

Nicole Briese
Nicole is the weekend editor for Brit + Co who loves bringing you all the latest buzz. When she's not busy typing away into the wee hours, you can usually find her canoodling with her fur babies, rooting around in a bookstore, or rocking out at a concert of some sort (Guns N' Roses forever!). Check out all her latest musings and past work at nicolebjean.com.
Celebrity Style
Celeb Style
Celebrity Style Controversy Politics Red Carpet
More From Celeb Style