Your Spirit Internet Cat, According to Your Zodiac Sign 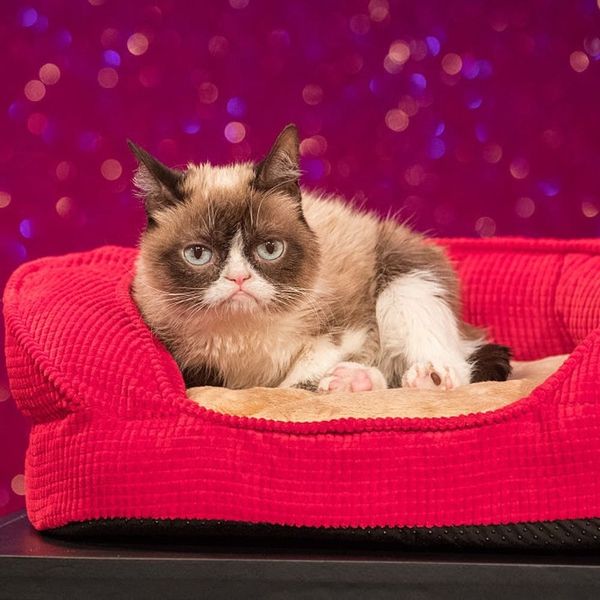 Cats rule, dogs drool (or so says the internet, at least). It seems that we’re all secretly (or not-so-secretly) cat ladies, attending cat yoga classes, buying cat furniture, and Instagramming our kitties — it’d be a crime not to share those cute faces with the world. But there are some celeb-status felines who fetch major likes for their adorable mugs and silly antics. We all have our favorite internet cats, for sure, but you may be missing out on some serious gems. We paired each zodiac sign with a popular internet kitty just to give you options (you’re welcome in advance).

今日は四角い生き物になってみました。 Hi! I am Square Maru.

Maru: This intrepid feline knows exactly what he wants and how to get it — namely, boxes and being inside them. It’s this same type of resilience and bravery that makes us love you so much, Aries. Neither of you know how to take no for an answer and often find yourself in situations (or boxes) where the only way out is to fight through it. We admire your shared determined bravery (and Maru’s adorable facial expressions too).

Shironeko: Lazy mornings, curled up in bed with a big cup of coffee, a good book, and a cute cat — sound like paradise to you, Taurus? You’re a confirmed homebody who prefers to be surrounded by beautiful things (who doesn’t?!) and enjoys spending time with loved ones. Shironeko is known for his happy-go-lucky, sweetly laid-back personality, seemingly always dosing in the sun or spooning with a friend. Sounds like the life to you!

Bonnie and Clyde: As an inquisitive, energetic soul, you totally get it. Sometimes, curiosity does kill the cat. And these two Himalayan siblings know a thing or two about getting into mischief — just check out the daily videos their owner posts on Instagram for proof of their mischief. This pair also represents your own natural duality, offering that yin and yang you need to stay grounded. These two poufs are also particularly affectionate with their family, and we know how much showing your love means to you. Go ahead; give ’em a follow.

It's cool to love your cat. #happyvalentinesday #lilbub

Lil Bub: Have you seen a sweeter, more disarming animal than Lil Bub? Born with several genetic mutations that are responsible for her short legs and toothlessness (thus that perma-tongue), she put some serious Cancerian tenacity to the test as a baby to survive, and just look at her now. She’s a loyal, playful cat who loves her family and loves to eat. We figured this one would pull on those trademark heartstrings of yours, sensitive Cancer.

Lola Emeline: You’ve got a big personality and a penchant for drama, and this internet kitty can definitely match you for both. Lola lives with four brothers and sisters and rules over them all with benevolent grace (and a perfected icy glare). She’s definitely got that Leo fire inside her, as neither of you like being told what to do and both prefer to be the center of attention.

The Queen is not pleased. Heads will roll.

Smoothie: The green eyes, those highlights, that poise — Smoothie cat is a physical embodiment of your perfectionist tendencies, Virgo. And from what we can tell from her owner’s Instagram, it seems this tiny fluff ball is quite the reserved, shy kitty, and you’ve got your own chilled-out vibe working for you.

Snoopybabe: You’re a people-pleaser who feels happiest surrounded by your friends and family, forever the consummate hostess, Libra. Snoopybabe, with those big, sad eyes, cute little ears, and super fuzzy body is a people-pleaser too, in that literally, no one can resist his charms.

I'm sorry, whose bed did you say this was? 😹

Lazarus: There’s no one more resourceful and brave than you, Scorpio — except, of course, for Lazarus the cat. This incredible feline was found lifeless, buried under freshly fallen snow, when he was literally brought back to life by his now-forever family. To show his appreciation, Lazarus is the most loyal, true companion anyone could ask for, even keeping watch over his owner’s side while he was laid up by a broken leg. Yep, we know it sounds familiar!

Honey Bee: Nicknamed “the hiking cat,” Honey Bee is an adventurer just like you, Sag. Honey Bee enjoys the great outdoors no matter the weather, bravely forging her own path (literally) through the forests of Seattle with her two humans, never letting the fact that she can’t see stand in her way. She’s an inspiration to anyone, but especially to you, since travel and freedom are at the core of who you are.

Grumpy Cat: We’re not saying you’re always grumpy, Cap, it’s just that Grumpy Cat does not suffer fools — and neither do you. Yes, you both exhibit incredible self-control, with Grumpy Cat doubling down on that trademark frown, and your incredible focus on succeeding on every front. Thing is, both you and Grumpy Cat are actually loyal, family-oriented beings with mushy centers full of love. We see you.

Nyan Cat: Nyan cat is an internet kitty in a league of its own (what with being computerized and all), which makes him a perfect complement to your quirky personality, Aquarius. Nyan is a cat with a Pop-Tart body and a rainbow-colored trail, flying through space. That’s basically the best metaphor for how you live your life, with free-wheeling independence and an appreciation for all things original taking center stage in your life.

Hello! I am sorry, because I didn't send photoes for a long time 3: #sunflower #cat #japan

Fukumaru: With one blue eye and one gold eye, this Japanese cat immediately gives off an other-worldly vibe. And once you learn that he just showed up out of nowhere on his now-owner’s farm and has stuck around as her loyal companion ever since, that meant-to-be feeling gets even stronger. As a spiritual empath yourself, it’s a feeling you know well, Pisces. We have a hunch you two would get along very well indeed.

Did we leave one of your favorite internet cats off the list? Tweet us @BritandCo and let us know who you love.