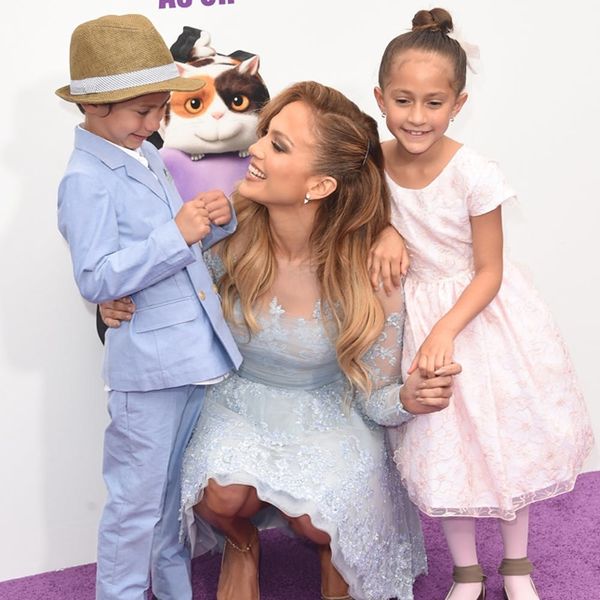 We’ve all seen it before: Your favorite celebrity announces their pregnancy, looks fabulous throughout the nine months and, before you can blink, is right back to their pre-baby weight without breaking a sweat. You can search high and low for rigorous workouts or the newest diet, but the truth is when it comes to losing the baby weight, it can be tougher than the media portrays it to be. We’re sharing nine incredible celebs who dealt with the media’s fixation on “bouncing back after baby,” along with their advice for other mothers. Scroll through to read post-baby body wisdom from some of our favorite women in Hollywood.

1. Amy Adams: Rather than feel panicked about putting on extra weight after her pregnancy in 2010 with her daughter Aviana, Amy Adams said she felt liberated in her new body. “Being pregnant finally helped me understand what my true relationship was with my body — meaning that it wasn’t put on this earth to look good in a swimsuit,” she said in an interview with Parade Magazine. “I’ve been working out when I can, and I’m trying to eat in a healthful way, but losing weight is not my number-one priority.” (Photo via Getty/Angela Weiss)

2. Drew Barrymore: Drew Barrymore explained to Glamour that focusing on the important things in her life helped her not focus on her changing body after her second pregnancy. “After making two babies, holy cow, does your body do some crazy stuff! It’s hard to stay positive and love yourself. You feel like a kangaroo with a giant pouch; everything’s saggy and weird. But you think about how beautiful it is that you’re able to make children. When I lose sight of that, I exercise, read Dr. Seuss’s Oh, the Places You’ll Go! and spend time with my kids. Then I start to see things that are bigger than myself.” (Photo via Getty/Jason Kempin)

3. Jada Pinkett Smith: When it came to her post-baby body, Jada Pinkett Smith knew there wasn’t one instant fix for taking off the baby weight: “Everyone recovers at a different rate, and that’s okay,” Jada told American Baby. “Give yourself a break, be patient and let your body guide your comeback.” (Photo via Getty/Eugene Gologursky)

4. Jenna Fischer: Celebrities may seem to lose weight quickly after their pregnancies, but Jenna Fischer told Parent’s Magazine that dropping her baby weight quickly wasn’t her immediate concern. “It happened the way it happens for most women. I just waited to start exercising and making any real changes to my diet until I was getting good rest and was healed from childbirth, which wasn’t until my son was about 6 months old.” She said, “I’m not a person who goes to extremes. I believe in moderation. I don’t go on cleanses, and I believe in having real dessert!” (Photo via Getty/Alberto E. Rodriguez)

5. Jennifer Lopez: For Jennifer Lopez, it wasn’t about hating her body for what it became, but loving it for what it was able to do and being patient and honest with herself. She told Telegraph, “The truth is it takes your body time to go back, and I think these days women are too hard on themselves with that. Nobody bounces back straightaway. You don’t know what kind of Spanx these women are wearing under their clothes, and what other tricks are going on.” (Photo via Kevin Winter/Getty)

6. Kate Winslet: With everything that comes with having a baby, Kate Winslet explained to Extra that weight loss was low on the list of priorities. “I have to say, so much attention is placed on this thing of bouncing back after a baby. I don’t advocate fast weight loss at all after a baby, because you are nursing, you can’t, you have to eat and you have to be well… throwing myself into some workout regimen is crazy.” (Photo via Getty/Chris Jackson)

7. Olivia Wilde: In , Olivia Wilde advocates not only for having a positive body image after giving birth, but for dancing her way to a healthier body with a fun dancercise workout. “I believe in a world where mothers are not expected to shed any physical evidence of their child-bearing experience. In that same world, I believe there is space for exercise to be as much a gift to your brain as it is your body. I don’t want to waste my time striving for some subjective definition of perfection. I’d rather rebuild my strength while dancing my ass off… literally.” (Photo via Getty/Ian Gavan)

8. Tia Mowry-Hardict: Whether you’re a supermodel or a kindergarten teacher, everyone’s body is different, and because of that, you shouldn’t be disappointed if something doesn’t work for you. This is exactly what Tia Mowry-Hardict told her twin Tamara Mowry-Housley after she struggled to lose weight after her pregnancy: “Everybody’s different — it could take up to four months, six months or a year. But be consistent. Slow and steady wins the race.” (Photo via Getty/Jason Merritt)

9. Jessica Simpson: Constantly under media scrutiny, Jessica Simpson is no stranger to comments on her weight, especially during and after her pregnancy, but she has decided that her body should not be held to an unrealistic ideal. She told USA Today, “I’m not a supermodel. My body is not bouncing back like a supermodel. I’m just your everyday woman who is trying to feel good and be healthy for her daughter, her fiancé and herself.” (via Getty/Jason Merritt)

What’s the best advice you’ve gotten for loving your post-baby body? Share them with us in the comments below!

Farah Prince
Farah is a New York writer who would happily spend her time wandering around the Met and loves style, design and anything wedding related. When she's not getting lost in Central Park - literally every time - she's on a lifelong quest to find the perfect burrito.
Body Positive
Health
Body Positive Jessica Alba Pregnancy Womens Health