Justin Trudeau’s Pride Pics Have People Crushing Harder Than Ever 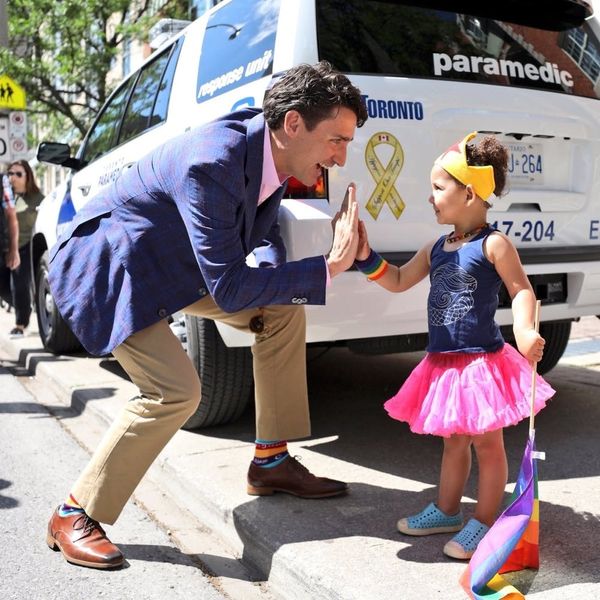 If you need another reason to crush hard on Justin Trudeau (have you NOT taken a peek at his hottest pics yet?!), then you really need to check out the political hottie at Pride this year. That’s right; not only did the Canadian PM show up for Toronto’s Pride celebration, but the pics of Trudeau with a rainbow maple leaf on his cheek have his fans swooning harder than ever.

Marching in the parade alongside his wife, Sophie Grégoire Trudeau, and the couple’s three young children, nine-year-old Xavier, eight-year-old Ella-Grace, and three-year-old Hadrien, the PM was greeted by an excited public… and even a baby or two, natch.

Not exactly a standoffish politician, he was eager to meet others at the parade, including an adorable little Wonder Woman.

And while folks were certainly loving Trudeau’s appearance, it definitely wasn’t his first Pride parade. Check out the PM last year…

Justin Trudeau raises the #Pride flag and gives us another reason to be jealous of Canada: https://t.co/cLlqirVrpw pic.twitter.com/xd5KHPVMUX

Honestly, this is the leader of Canada…

Apparently, he is quite huggable. pic.twitter.com/M8mUlEcM5h

No wonder peeps are crushing so hard on this particular politician.

What do you think about Justin Trudeau’s Pride appearance? Let us know @BritandCo!

Desiree O
Desirée O is a ‘Professional Bohemian’ who loves anything and everything related to the arts, entertainment, and pop culture. She ADORES being a ‘Newsy’ for Brit + Co, covering all of the latest tidbits of awesomeness that you want to read about. When she’s not writing, she’s either making messy art, going on long adventurous walks with her camera, or poking around over at bohemianizm (http://www.bohemianizm.com/). You can find out about Desirée O and her work at http://DesireeO.com/ or follow her on Twitter @DesireeO.
LGBTQ
Politics
LGBTQ Politics