Now Kids Can Make Their Own Computer Games… With This Game! 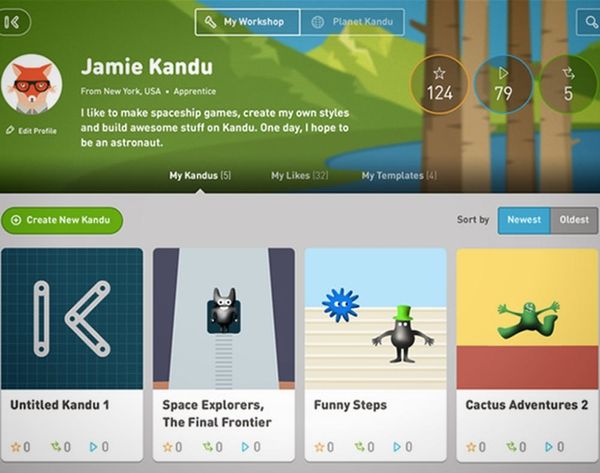 Growing up we were lucky enough to score some video game playing time when the ‘rents okayed it or when we were at a friend’s house. Today’s tots can make their own games. By playing games. One of the recent innovations hoping to get kids to think STEM as often as they text OMG is Kandu. It’s an easy iPad app that gives kids all the tools they need to make whatever they can dream on a touch screen.

It’s all in a name and Kandu proves what kids will discover soon after they start playing with the app: They can do it! Code and program, that is. The bright interface unlocks all the tools they need to make games, animated GIFs, whatever they can think up [yup, they can do].

Kids make profiles in Kandu’s creative social network-shop to show off the projects they made and scope out other coders’ work for inspiration. If they see something they like but want to do differently, they can use that great idea as a template for theirs, crafting “remixes” of other’s projects.

If you want a glimpse into the future, watch kids testing out Kandu here and see the Kandu Challenge of the Week’s winners, like this impressive Gravity recreation. When these tykes are done making games and cool pictures, I have some public transportation apps that could use some tinkering and combining…

Kandu will prove that you don’t need to be a graphic designer wunderkind, you don’t need to speak javascript from the womb, you just need to have an imagination. And what kid doesn’t have that? Technically Kandu is an iPad game meant for little ones, but it’s so easy, even you will be able to use it ;) Sign up for early access to it now!

What was your first “computer creation” (We will not make fun of you if “personalized LiveJournal” is your answer.)

Lisa Raphael
In her past professional lives, Lisa has served the masses as the Editorial Director at Brit + Co, Bieber Whisperer at J-14, Golden Girls Fan Club Prez at Lifetime and Talk Show Host Understudy to Katie Couric. Now, she's taking on the sports world at The Relish, teaching Hairography 101 in her spare time and will forever be trying to fill the hole Zayn Malik left in her heart.
Education
Tech
Education STEM