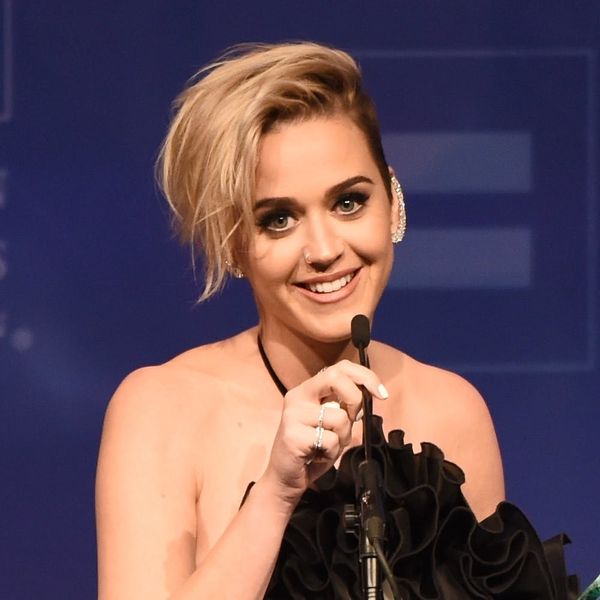 Katy Perry’s feud with Taylor Swift doesn’t look like it will be going away anytime soon — at least, not if the two stars have anything to say about it. With no friendly peace offering or miraculous make-up anywhere in sight, not only is their professional (and personal?) dislike of each other as seemingly strong as ever, but Katy Perry has now FINALLY responded to the rumors that Taylor Swift’s “Bad Blood” is in fact all about her.

When Swift released “Bad Blood” back in 2014, it immediately sparked curiosity over who she might be singing about. When she sat down for a chat with Rolling Stone, she revealed that her hit song was written about her experience with a fellow female singer, saying, “She basically tried to sabotage an entire arena tour. She tried to hire a bunch of people out from under me.” While Swift was careful not to name anyone specifically, fans assumed that Katy Perry was the person in question because the two share (and possibly fight over) some of the same tour dancers.

While Perry hasn’t been keen in the past to discuss the song, now that she’s promoting her own new music, Entertainment Weekly dared to ask, “There are rumors that ‘Bad Blood’ is about you. Does [your new] album have a reaction to ‘Bad Blood’?” While Katy first admitted that when it comes to Swift’s song, it’s “not my question to answer,” she added, “I think [my new album is] a very empowered record. There is no one thing that’s calling out any one person.”

She didn’t stop there, though, continuing, “One thing to note is: You can’t mistake kindness for weakness and don’t come for me. Anyone. Anyone. Anyone. Anyone. And that’s not to any one person and don’t quote me that it is, because it’s not. It’s not about that.” We’re gonna assume she’s referring to the feud with Swift there, but she wanted to make herself clear by saying, “Honestly, when women come together and they decide to unite, this world is going to be a better place. Period end of story. But, let me say this: Everything has a reaction or a consequence so don’t forget about that, okay, honey. [Laughs] We got to keep it real, honey.”

Do you think “Bad Blood” could be about Katy Perry? What are you expecting from Perry’s new album? Let us know @BritandCo!

Desiree O
Desirée O is a ‘Professional Bohemian’ who loves anything and everything related to the arts, entertainment, and pop culture. She ADORES being a ‘Newsy’ for Brit + Co, covering all of the latest tidbits of awesomeness that you want to read about. When she’s not writing, she’s either making messy art, going on long adventurous walks with her camera, or poking around over at bohemianizm (http://www.bohemianizm.com/). You can find out about Desirée O and her work at http://DesireeO.com/ or follow her on Twitter @DesireeO.
Katy Perry
Celebrity News
Katy Perry Music Taylor Swift