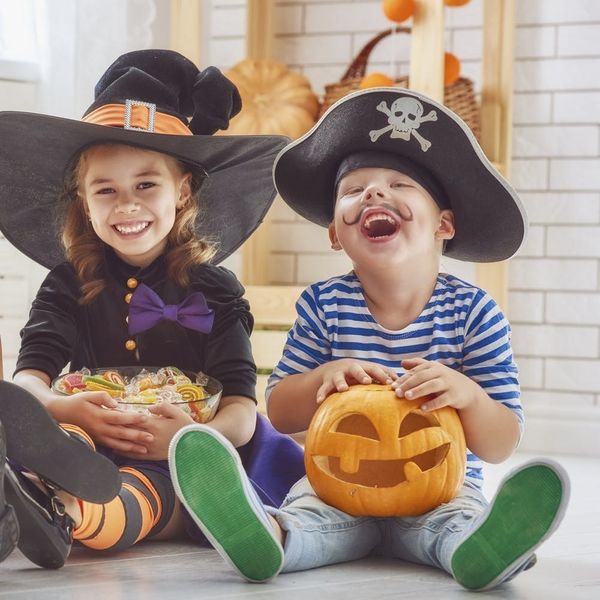 Ghosts, ghouls and goblins, oh my! October 31 is coming up and you’re totally set for your Friday the 13th, Exorcist, Nightmare on Elm Street scary-movie film fest. Um, wait. Now that you have kids, you can’t exactly put Jason or Freddy on during prime-time play. You need something that’s more tame than terror when it comes to your Halloween movie picks. Check out these 10 completely kid-friendly Halloween flicks, some of which you might just remember from your own younger years.

1. It’s the Great Pumpkin, Charlie Brown: Technically, it’s not a full-length feature, but, it’s pretty much the film kids watch on Halloween. Even though it was made way, way back in 1966, your tot will still sit glued to the screen when you pop it on. It has great animation and a heartfelt story, and it celebrates its 50th anniversary this year, proving this classic has withstood the test of time.

2. Casper: The 1995 movie features the “friendly ghost” (along with Bill Pullman and Christina Ricci) in a story that your little ghouls will love. Halloween is usually full of scary ghosts, but Casper is cute and kind and just looking to make a friend.

3. The Little Ghost: That’s Das kleine Gespenst to you. At least, that’s the original German title. Even though the subject matter is totally tame, this cute film has English subtitles. That means you’ll be doing a hefty amount of reading if your child isn’t up to sentences yet.

4. Frankenweenie: Think Frankenstein plus a dog. Little, little kids might find the film a bit too frightful for their tastes. That said, it’s still PG, and Tim Burton’s cool black-and-white stop animation will keep you interested too.

5. Escape to Witch Mountain: Yep, the same one that you remember from your youth (and it was probably an oldie back then!). The 1975 now-nostalgic hit is about twins with paranormal abilities and features Kim Richards, who you probably better know as either Paris Hilton’s aunt or one of the Real Housewives. It’s tame enough for your little kiddo but still cool for the older ones.

6. Bedknobs and Broomsticks: Here’s another ’70s oldie that even your modern-day kid will enjoy. This rated-G film stars Angela Lansbury (in her pre-Murder She Wrote days) in a mix of live action and CGI fun. Your kids will get a kick out of the enchanted bed that flies.

7. Monsters, Inc.: Who doesn’t love that Bigfoot-looking spotted blue fluff-fest that is Sulley? Well, your child does! Sulley, Mike, Boo and a cast of not-so-threatening monsters fill this Pixar flick with laugh-out-loud fun about a factory designed to scare kids. You might even get in a giggle or two yourself.

8. Wallace & Gromit: Curse of the Were-Rabbit: It’s awesomely adorable, in a way that’s also more than fit for grown ups. It follows the adventures of the duo tracking down a mutant rabbit and features the voices of Helena Bonham Carter and Ralph Fiennes. Not convinced? This film also won an Academy Award for Best Animated Feature Film.

9. Abbott and Costello Meet Frankenstein: Yep, Dad’s going to enjoy showing his mini me this one. It’s a classic. When the comedy team encounters Dracula, Frankenstein’s Monster and the Wolf Man, there’s plenty of hilarious mayhem that follows. This film may be in black and white (which your child’s sure to groan at — only at first), but it’s still fabulously funny.

10. Hotel Transylvania: This monstrous movie takes vampires down a notch from their teen Twilight-esque fame. Count Dracula now runs a hotel for monsters to escape from… humans. Plus, the father-daughter story will keep your child interested and excited to see what happens next.

Erica Loop
Erica Loop is a freelance writer living in Pittsburgh. When she's not busy creating kids' activities for her blog Mini Monets and Mommies, you can find her trying to hang out with her teenage son, being chased by her two Olde Boston Bulldogs or teaching a children's karate class (she's a third degree black belt!).
Halloween
Parenting
Halloween