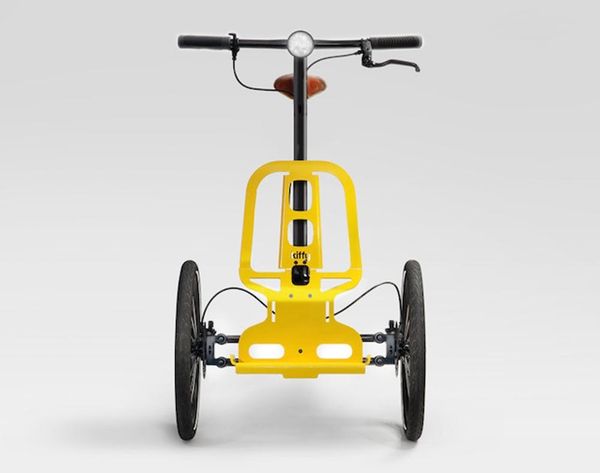 The last time you rode a tricycle, you were probably in diapers. Actually, scratch that. I was in college and it was an integral component of a dare that also involved water wings and a large Wisconsin lake. What I learned from that soggy situation was that adults do not belong on tricycles. However, Kiffy is trying to prove us all wrong with their foldable, multi-purpose trike for grown-ups.

As City Labs reports, “Many people have tried, and failed, to make a mockery-proof urban tricycle.” It seems Kiffy is about as close as you can get, maybe because it’s French. Built by France’s Agence 360 and NP Innovation, Kiffy is a light and portable bike that weighs only 27 lbs and will break down to 57 x 53 cm. The nice part about the design is that it just looks like a fairly normal bike from the side, rather than a strange overgrown tricycle.

It comes with all the function you’d need from both a bike and a dolly. The dolly function is awesome, and you can use it to transport things safely between the two front wheels while you’re riding.

You can also skip the bike function altogether and set the Kiffy up like a shopping utility cart when you have to haul guitar amps, groceries (hello, leeks!) and banjos around town. That banjo really is a drag. Watch the Kiffy roll below:

Would you be seen on this thing? Yes or no?

Annie D'Souza
Annie is the founding father and editor-in-chief of The Midwestival and a long-time jean-on-jean enthusiast.
Bike
Home News
Bike
More From Home News