How to Lock Your Bike from Your Phone 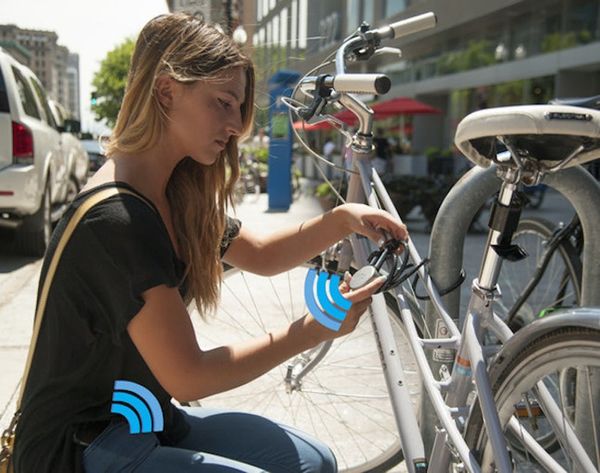 When a Kickstarter campaign raises three times their goal, we sit up and take notice. Noke, the world’s first Bluetooth padlock, has raised more than $300,000 — and their campaign doesn’t even end until September 17. They still have plenty of time left to create an even bigger crowdfunding avalanche, but most importantly, there’s plenty of time left for you to be among the first to snag a Noke (or two) of your own!

If you’re going to reinvent the padlock, you better do it right. The Noke lock is designed to be sleek and simple, because locks should be simple. To set your Noke up, you download the companion iOS or Android app, which automatically pairs your lock to your Bluetooth 4.0-enabled smartphone. You can actually give your Noke a name and a photo so it’s easy to recognize later (ours is going to be named Frances FYI ). To unlock your Noke, press the shackle and the device wakes up and searches for your phone or a shared phone. If the phone is within 10 feet, it’ll instantly unlock!

You don’t need to launch an app or even get your phone out of your purse. If you have some reason to limit the range of the lock or you want to shut off the auto-unlock feature, you can do that within the app. In that case, you’ll just need to open the app to unlock.

Need to lock your phone in a locker? Working with a dead battery? Noke’s thought of that too. When you set your device up, you input a personal Quick-Click code (it reminds us of morse code). This will allow you to lock and unlock your Noke without a phone — or wander by without having it unlock.

Noke is also shareable (we love sharing!), so you can give access to your lock if you’re lending your bike (or anything else) to a friend. You can choose permanent, one-time or custom sharing settings for any length of time. For extra security, you can also set up push notifications within the app if you’d like to know when Noke is being opened.

The designers figured that Noke will be popular as a new kind of bike lock, so they created a custom chain and bike mount to securely attach to your seat post. It’s only $20, so we’re excited to try that baby out on our two-wheeler.

The Noke runs on a long-life battery that should last about a year with normal use. When it’s time to replace it, you’ll get a notification through the app. All you do is unlock Noke and twist off the back cover — easy peasy. If the battery is totally dead, they’ve added a way to jumpstart the device with an external battery to unlock it.

We first covered the folks at FUZ Designs when they released their multi-device Everdock charging station, and it’s nice to see them working on another potentially game-changing invention. They really have thought of everything with this one!

Be one of the first humans to use a Noke lock by backing the campaign here.

What do you use as your bike lock? What’s the “smartest,” most connected gadget in your home?

Annie D'Souza
Annie is the founding father and editor-in-chief of The Midwestival and a long-time jean-on-jean enthusiast.
Crowd Funding
Tech
Crowd Funding Kickstarter