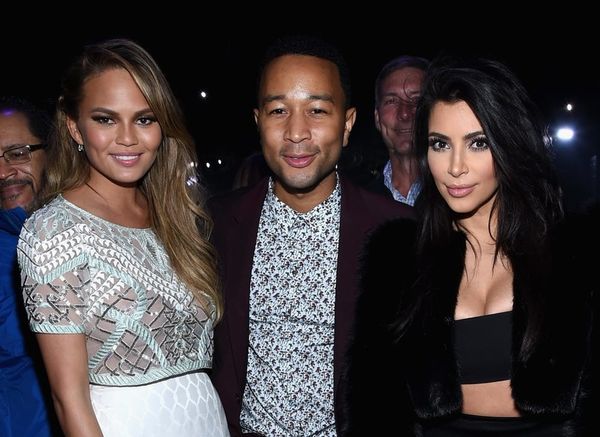 Leave it to Chrissy Teigen to have the most relatable baby shower… well, ever. The Lip Sync Battle host celebrated her little “legend in the making’ with husband John Legend this weekend at a fête that included famous friends, music, and the most chill catering menu of all time.

Rather than serving an uber-fancy meal on par with her A-list guests (the likes of which included Kim Kardashian West, Kris Jenner, Jen Atkin, Jesse Tyler Ferguson, and Kanye West), the soon-to-be mommy of two noshed on catered burgers, chicken sandwiches, and of course, shakes, from — get this — legendary fast food joint Shake Shack!

The model was also captured sitting on a kitchen counter and indulging in one of her five cakes (all bearing “Legendary” puns) by none other than Kardashian West herself. “Chrissy ate the entire cake you guys,” the 37-year-old joked.

Legend, meanwhile, treated guests to tunes as he plunked away at the piano keys.

Teigen announced her pregnancy back in November with a heartwarming video of herself asking two-year-old daughter Luna what was in her stomach. “Baby!” the toddler replied.

Congratulations to the expecting family!

What do you think of Chrissy’s baby shower grub? Sound off over @BritandCo.

Nicole Briese
Nicole is the weekend editor for Brit + Co who loves bringing you all the latest buzz. When she's not busy typing away into the wee hours, you can usually find her canoodling with her fur babies, rooting around in a bookstore, or rocking out at a concert of some sort (Guns N' Roses forever!). Check out all her latest musings and past work at nicolebjean.com.
Baby Shower
Food News
Baby Shower Celebrities Celebrity Baby Chrissy Teigen Friends Kardashians
The Conversation