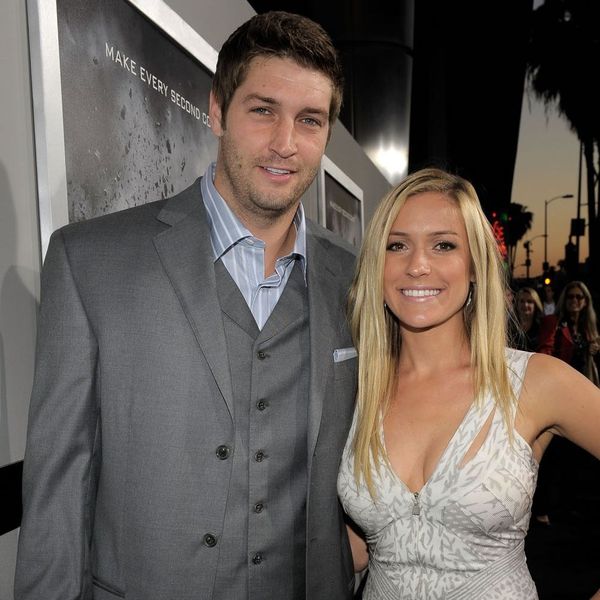 Back in March, Kristin Cavallari’s NFL-player husband Jay Cutler was released from the Chicago Bears, after which the pair said goodbye to the place they had called home for his eight seasons with the team and settled in Nashville with their children (four-year-old Camden, three-year-old Jaxon, and 20-month-old Saylor). Now, though, the family might be spending some time in Florida, as Cutler has just signed a deal with the Miami Dolphins.

Cutler inked a contract for one year and a whopping $10 million, plus up to $3 million in incentives (which is on par with many athletes’ salaries, but is still a jaw-dropping number). Cavallari reacted to her husband’s big news by posting a pic of the pair on Instagram, sharing a kiss and a goodbye that was surely filled with mixed emotions. The 30-year-old former Laguna Beach star added the caption, “And he’s off…but this time as a dolphin. So excited for my man on this next journey #MiamiDolphins.”

And he's off...but this time as a dolphin 🐬 so excited for my man on this next journey #MiamiDolphins 📸: Cam Cutler

Cavallari spoke to Us Weekly in June about Cutler’s (short-lived) retirement from the game, saying, “Selfishly I’m excited for him to be safe from now on. It will be nice not to see him get hit anymore and it will be nice to have him around a lot more.” She added, “And I’m just excited for this new career. He’ll be doing NFL commentary [as an NFL analyst for Fox Sports] so it’s a great way for him to stay involved in football without having to get hit every week. I’m very excited for the future for him.”

Now that plans have changed, we have no doubt that Cavallari is still excited for her husband, if a little sad that she has to watch him leave.

Do you and your S.O. spend long periods of time apart because of one or both of your careers? Let us know how you manage @BritandCo!