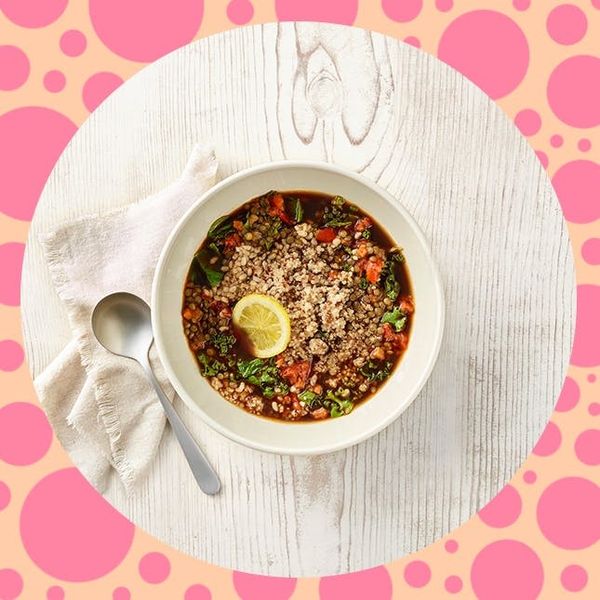 Searching for vegetarian options while dining out can be a chore, and it can seem especially difficult when you're looking for meatless options at fast food restaurants. Back in the day, even the fries were often not vegan (though thankfully for us veg-heads, McDonald's doesn't fry in beef tallow anymore). Nowadays many chains have specific vegetarian and vegan items, and almost all of them have foods you can hack until they become the cruelty-free grub you desire. If you're on the road and looking for a quick bite to eat, these 14 vegetarian fast food options will satisfy.
Taco Bell Veggie Power Menu Burrito: You may not realize it, but Taco Bell has one of the most extensive vegan and vegetarian menus around. You can swap any meat for their vegan pinto or black beans, and their tortillas and rice are both vegan too. The Veggie Power Menu bowl is a hearty option with 16 grams of protein, but you can get classics like the seven-layer burrito and bean burrito made vegetarian or "Fresco style," which removes the cheese and adds pico de gallo to any menu item. (Photo via Taco Bell)
Subway Veggie Delite: Subway's Veggie Delight is a classic, available in six-inch or famous footlong form. We like it with avocado added to the mix, along with basically every veggie and savory pickled thing available. If you're really feeling hungry, you can have them add a veggie patty too. (Photo via Subway)
White Castle Veggie Slider: White Castle's vegan veggie slider is surprisingly delicious. Their veggie patties are made by Dr. Praeger's from carrots, string beans, zucchini, peas, broccoli and spinach, and after topping them with Sweet Thai, Ranch, or Honey Mustard sauce, you've got a tasty little morsel on your hands. (Photo via White Castle)
QDOBA Mexican Eats Veggie Burrito Bowl: If you're looking for fresh Mexican food, Qdoba has you covered. You can enjoy its nutritious veggie burrito bowl, featuring a bowl of cilantro-lime rice with black beans that's topped off with corn salsa, in-restaurant grilled fajita veggies, and hand-smashed guacamole. (Photo via Qdoba / Facebook)
In-N-Out Grilled Cheese: Go meatless by ordering the grilled cheese, or if you're really cool, go for the Animal Style grilled cheese. It has everything you love about their burger minus the patty — special sauce, grilled onion, melted cheese, pickles, and veggies that will totally satisfying your fast food cravings. (Photo via In-N-Out)
Wendy's Baked Potato: Wendy's has several vegetarian options — its salads are surprisingly great if you hold the chicken — but nothing holds a candle to its classic baked potato. Order one plain, topped with sour cream and chives, sprinkled with cheese, or smothered with saucy broccoli and cheese sauce for a totally satisfying meal. (Photo via Wendy's)
Potbelly Mediterranean Sandwich: Potbelly Sandwich Shop, an ever-expanding chain, has four vegetarian options. Choose from peanut butter and jelly, grilled cheese, classic vegetarian, or, our fave, Mediterranean. It's loaded with spicy hummus, feta cheese, artichoke hearts, cucumbers, and roasted red peppers. (Photo via Potbelly)
California Pizza Kitchen Citrus Adobo Pizza: California Pizza Kitchen has tons of veggie options, but this spicy Citrus Adobo pie (without carnitas) is our favorite. Even better, you can now swap out the traditional wheat crust for one made of cauliflower. (Photo via California Pizza Kitchen)
Burger King Veggie Burger: Burger King offers a solid veggie burger. It's not too different than what you might make at home (MorningStar Farms patties are a staple), but when you're hungry on the road, it's nice to have an affordable veg option at a chain you can find almost anywhere. (Photo via Burger King)
Jack in the Box Pancakes: At Jack in the Box, you're best off sticking to breakfast. Many of its appetizers are vegetarian too (hello, jalapeño poppers). We think its mini pancakes are the most satisfying option. (Photo via Jack in the Box)
Chipotle Veggie and Sofritas Burritos and Bowls: Chipotle has a ton of options for vegans and vegetarians. Opt for a burrito or bowl with rice, beans, fajita veggies, and guac, or go with the hearty sofritas filling made from spiced tofu. (Photo via Chipotle / Facebook)
McDonald's Egg and Cheese McMuffin With Hashbrowns: Sadly, McDonald's doesn't yet have a veggie burger on its menu in the US. So our fave option is an egg and cheese McMuffin with a side of perfectly golden hasbrowns, now available all day long. (Photo via McDonald's)
Panda Express Eggplant Tofu: Get your mall food court Chinese fix the vegetarian way with the spicy, sweet, and salty eggplant tofu at Panda Express. Add a side of chow mein and cream cheese rangoons, and you'll be ready for a blissful post-shopping nap. (Photo via Panda Express)
Panera Bread Vegan Lentil Quinoa Broth Bowl: For vegans, there's the tasty vegan lentil quinoa broth bowl, full of protein and veggie goodness. Vegetarians have a few more options, including the Modern Greek Salad with Quinoa, Steel Cut Oatmeal, and Avocado, Egg White, and Spinach Breakfast Sandwich. (Photo via Panera)

Justina Huddleston
Justina Huddleston is a food writer living in Los Angeles. When she's not busy writing, she spends her time in the kitchen creating both virtuous and decidedly junky vegan food. Buffalo chickpea pizza, anyone? She's also been known to eat a plain block of tofu or beans straight out of the can for lunch, but somehow those culinary adventures don't make it to her Instagram. You can follow Justina on Twitter or see what's cooking in her kitchen on her blog, A Life of Little Pleasures.
Fast Food
Healthy Eating
Fast Food
The Conversation
More From Healthy Eating