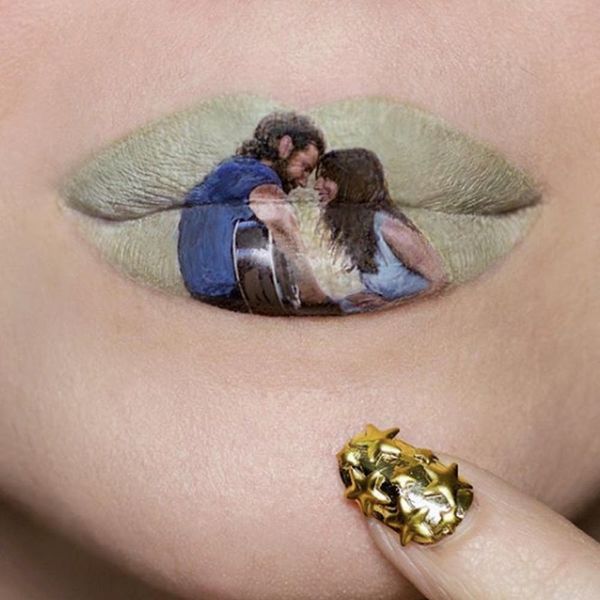 When you think of celebrities and beauty, visions of red carpet makeup, statement hair accessories, and intricate updos likely come to mind. But have you ever thought about what would happen if Hollywood’s hottest stars and films were actually depicted with makeup? While we can’t say that we have either, one person has: Maryland-based makeup artist Ryan Kelly.

Known across Instagram for unbelievably intricate pop culture-inspired lip art, Kelly, a full-time makeup artist and owner of freelance makeup company Blend Makeup Artistry, has painted everyone from Rihanna and Mrs. Doubtfire to Austin Powers and The Golden Girls on her pout. And with the 2019 Oscars coming up this weekend, we tapped the beauty pro, who has over 77,000 Instagram followers, for an exclusive collab. But first, we wanted to learn what makes these head-turning masterpieces possible. Keep scrolling for a Q and A with the 34-year-old artist herself.

Brit + Co: How did you start creating lip art?

Ryan Kelly: I stumbled into it in the weirdest possible way. I suppose it’s entirely appropriate that something as odd as painting tiny pictures on your lips would have a Kramer-esque emergence into my life. Long story short: Katy Perry was performing the halftime show at the Super Bowl in 2015. One of her dancers, dressed as a shark, was fumbling through the choreography but totally owning it. In a classic “it seemed hilarious at the time” moment, my husband suggested that I paint a shark on my lips and fins on my fingers so that I could puppet my very own Left Shark performance. I posted the end result as a joke, but folks seemed to genuinely like the concept. Four years (and a face palm every time I tell that story) later, that is how I began my lippie love affair.

B+C: What types of products do you use for your lip paintings?

RK: The funny thing is, some products that are specifically made for the lips aren’t necessarily best for lip art. A typical creamy lipstick might feel great on the pout, but it makes for a runny mess when incorporated into one of these looks. I love working with liquid lipsticks because of their durability and color pay-off. Water-based face paints are another great lip art product.

B+C: How long does one of your lip art designs typically take?

RK: It completely depends on the day, the complexity of the portrait, and, to be totally honest, my toddler’s nap schedule. If I have a little time to relax and just play with a new concept, I can usually knock it out in a couple of hours. Those are the really fun days. Realistically though, I’ve probably procrastinated my way to a tight deadline, the cat just puked on my rug, and I have to change a diaper mid-look. Those days it takes a little longer.

B+C: How on earth do you create such lifelike depictions?

RK: It’s no accident that the phrase “necessity is the mother of invention” exists. Before I had my daughter, I had endless hours to paint. At that point, everything I did was done freehand. But when you’re a mom working from home, there’s really no choice but to get creative with the small windows of time you have to yourself. I had to figure out a way to refine my process. I saw a video of another makeup artist use transfer paper (similar to what a tattoo artist uses) for body painting and a light bulb went off in my head! It’s funny, I think sometimes people think using what is essentially a stencil is an easy way out. Truthfully, it’s a much longer process from start to finish. It’s just easier to break up throughout the day.

I start by drawing a huge pair of lips on paper so that I can roughly gage the proportions and where I want the image to fall. Then I sketch out the scene, scan it and shrink it down to the measurements of my lips. I print the sketch on temporary tattoo paper and transfer it to my lips. At that point, I shade and color the image with product to make the illustration come to life. Boom. It’s done and the baby is still napping.

I try to freehand as much as I can, but when I became a mom, I promised myself that I would continue to make art a priority in my life. This new process is how I’ve been able to keep that promise.

Now, what you’ve all been waiting for: Five one-of-a-kind lip art looks that celebrate a handful of the films nominated for Best Picture at the upcoming 91st Academy Awards on Sunday, February 24, at the Dolby Theatre in Los Angeles.

Are you obsessed with these intricate lip ideas? Tell us @BritandCo!

Rebecca Norris
Rebecca Norris is the Beauty Editor at Brit + Co. With a New York apartment that looks more like a Sephora than a home, she's just as quick to roll up her sleeves to swatch all the best bold lipsticks, as she is to hop in a dermatologist's chair to review a vampire facial. After all, anything in the name of a good story, right?
Lipstick
Beauty News
Lipstick Makeup Oscars
More From Beauty News