The ‘Mamma Mia: Here We Go Again’ Cast Reveals Who Was the Real Diva on Set 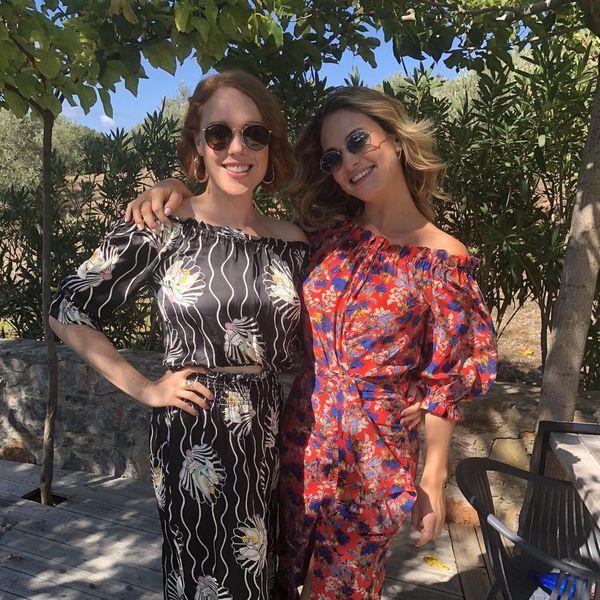 Ten years ago, Mamma Mia sang and danced onto screens and into our hearts. The sequel, Mamma Mia: Here We Go Again, brought back all of the things we loved about the original — a star-studded cast, a dreamy Mediterranean island, and a soundtrack of catchy ABBA songs that refuse to get unstuck from your head — and supersized it with one word: Cher.

Mamma Mia: Here We Go Again goes back in time to dive into the backstory of the Dynamos and Dynabros and also introduces a vibrant new roster of talent, including Lily James (young Donna), Jessica Keenan Wynn (young Tanya), Alexa Davies (young Rosie), Hugh Skinner (young Harry), Josh Dylan (young Bill), and Jeremy Irvine (young Sam). It’s clear the cast had just as much fun making the film as we did watching it. Here’s what they had to say about everything from what was left out of the final film to who was the true diva on set.

On What Was Left on the Cutting Room Floor: Says James, “There’s nothing much that was cut. Ol Parker, our director and writer, wrote a very well structured, timed out, paced out [film]. And this was pretty faithful to what he set out to do.” Of the few moments that were cut, James and Keenan Wynn had a song that was edited (“I Wonder”) because it didn’t keep up with the tone of the scene. It’s now included as a deleted scene on the home entertainment release. Irvine had a verse in “Andante, Andante” that was ultimately cut as well. “I think it was the only bit of good singing I did in the movie,” he jokingly laments. “But in movies, you have to let it go and be grateful for what has made the final cut.”

On Stepping into the Shoes of the Film’s Iconic Characters: Filling the shoes of A-listers like Meryl Streep, Christine Baranski, Colin Firth, Stellan Skarsgard, and Pierce Brosnan was no easy feat. But the entire cast quickly became a tight-knit family, and the supportive vibes on set gave everyone room to embrace and discover their characters. Most importantly, there were no egos.

Keenan Wynn says the set was “very welcoming and equal and wondrous.” She credits the bond created between the actors in enabling them to fully embrace their roles. “You want to do the movie justice, you want to do the characters justice, and then you want to do these actresses justice. Luckily, we developed a relationship between the three of us [with James and Davies] for five weeks in rehearsal that allowed us to find the characters just being ourselves. Once we found that relationship, it was much easier to tap into Tanya, Rosie, and Donna.”

Irvine adds, “What [the original cast] did do was hang out with us a lot, and we sort of all became mates. I think they’re all a bit too nice of people to give us advice, but they did make us all feel very comfortable and like we’re also working on their level… even though we weren’t.”

On Cher: Everything about Cher, who plays Sophie’s grandmother — and Meryl Streep’s mother — in the movie is iconic, from her soulful her rendition of “Fernando” to her platinum blonde hair. On set, though, the singer was surprisingly… normal. “She changes the temperature in the room; the pH changes when she walks into the room,” says Keenan Wynn. But she’s quick to add, “She’s lovely. She was really nervous, which was cute. She watched [the film] for the first time at the premiere, and then she was grabbing everyone just to tell them how much she admired and adored them.”

Cher is still Cher, though, and you can’t help but be starstruck by her presence. When she sang, everyone came to watch. “Suddenly Bob from accounting was in, and the cooks were in, and people’s moms were in,” says James, who even brought her own mom to the set the day Cher performed because “Cher’s her favorite ever.” James likens the experience to being in the front row of a private Cher concert. Keenan Wynn adds, “She sounded amazing… [There was] not a dry eye.”

On the True Diva of the Set: Irvine calls it hilarious that “you’ve got so many big stars. And then Meryl Streep walks in, and you’re like, Well, that’s as big as it gets. And then Cher walks on set.” Charles adds, “And then Hugh Skinner walks on set.”

The true friendship that emerged between the cast members contributed to some gentle ribbing from Dylan and Irvine, who joked that it was Skinner who was the true presence on set. “He’s very demanding, so you feel that fear that the crew gets when Hugh walks on set. Whereas with Cher, she’s actually very lovely and sweet, and everyone gets on really well with her.” Skinner, he says, was “the queen of the set… Queen Hugh.”

Check out the full interview below.