This Is the Diet That Could Ease Depression 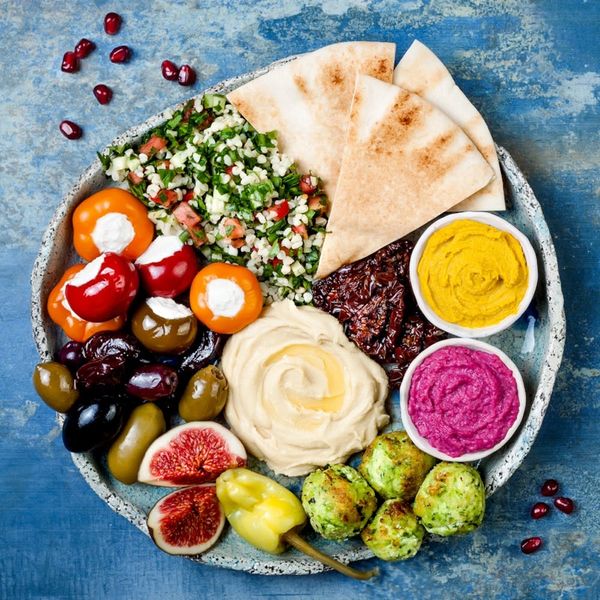 Can you eat your way to happiness? Quite possibly — and not through ice cream and chocolate, like you might think (sorry to disappoint!). A 2018 meta-analysis in the journal Molecular Psychiatry looked at 41 studies to determine how diet might influence mental health. The researchers found that one type of eating plan stood out as the most likely to reduce depression: the Mediterranean diet.

When researchers set out to discover whether a diet could boost mood, they did so with good reason. According to the World Health Organization, across the globe, mental illness costs over one trillion dollars in lost productivity annually — not to mention the enormous associated healthcare costs. Perhaps if dietary changes could work to stop depression before it starts, theorized the researchers, we could all save a lot of money, sick time, and trips to the doctor.

It appears they were on to something. Their analysis revealed that not only did people who ate a Mediterranean diet have a significantly lower risk of developing depression, but the more people adhered to the diet, the better their chances of mental health. “We found that people with a more Mediterranean-like diet had a 33 percent lower risk of developing depression than people whose diet least resembled a Mediterranean diet,” said study author Camille Lassale. So what’s the connection between this diet and depression, and do you have to eat falafel and hummus all day to reap the benefits?

The likely explanation for the Mediterranean diet’s ability to quell bad vibes is its anti-inflammatory characteristics. Foods that make up the diet — like whole grains, nuts, fruits, and vegetables — are known for containing antioxidants. These beneficial nutrient compounds help keep cells “clean” and free of inflammation and damage. And, increasingly, research shows that depression, like many other diseases, is often a matter of inflammation. The more we can reduce inflammation through diet, the less we experience the neural damage that leads to feeling low.

Following a Mediterranean diet for better mental health isn’t just about the quinoa and beans that fill your plate, either. It’s also about what you don’t eat. “On the one hand, anti-inflammatory foods such as extra-virgin olive oil, fatty fish, leafy greens, tomatoes, citrus fruit, herbs, and legumes are consumed almost daily on the Mediterranean diet,” says registered dietitian nutritionist and food blogger Elena Paravantes, who specializes in the diet. “On the other hand, the Mediterranean diet is low in foods that can cause inflammation, such as highly processed and refined carbohydrates, certain vegetable and seed oils, and red and processed meats.” Whether you follow a Mediterranean diet or not, staying away from these foods could be one simple step toward feeling better, both mentally and physically.

Although the meta-analysis did not take factors other than diet into account, food is just one part of the lifestyle in the cultures that ring the Mediterranean Sea. Often, in terms of research, the “Mediterranean diet” refers to this bigger lifestyle picture. Several practices common to Mediterranean culture could also play a major role in reducing the risk of depression. “We know that depression is associated with lack of sleep, stress, loneliness, and lack of exercise. The Mediterranean is full of acts of self-care that combat these factors,” Paravantes explains. “That can include quiet time/naps, eating together (rather than alone) during lunch breaks, informal social interactions, coffee breaks, and physical activity that is not a chore, such as walking or gardening.” Getting social, getting enough rest, and getting active are all surefire ways to boost mood.

Easing Into a Mediterranean Diet

If you suffer from depressive symptoms, it may be worth giving some dietary changes a try. But if you don’t feel ready to turn your diet into a Mediterranean free-for-all, try easing into it with small tweaks. Paravantes offers several suggestions: “One simple change you can make is to try eating one to two vegetarian meals a week. The Mediterranean diet has an abundance of plant-based, hearty main course vegetarian meals that are filling and delicious. Use extra virgin olive oil for most of your cooking needs. It’s anti-inflammatory and rich in antioxidants. Make meat a side dish, and don’t drink your calories. The main beverages on the Mediterranean diet include water, coffee, and wine (if you consume alcohol). Limit your intake of juices, soft drinks, and milk.”

One this is for sure: Even if a Mediterranean diet doesn’t prevent mental health issues 100 percent, you can feel good knowing it’s an excellent choice for overall health.

RELATED: Here’s Why the Mediterranean Diet Is So Good for Your Heart

From Your Site Articles
Sarah Garone
Sarah Garone is a mom, wife, nutritionist, and freelance writer in Mesa, AZ. She loves music and travel, speaks fluent German, and does a lot of running (to counterbalance the surprising amount of cookies she eats for being a nutritionist). Find her sharing great recipes and helpful nutrition info at A Love Letter to Food.
Diet
Issues
Diet Healthy Living Mental Health