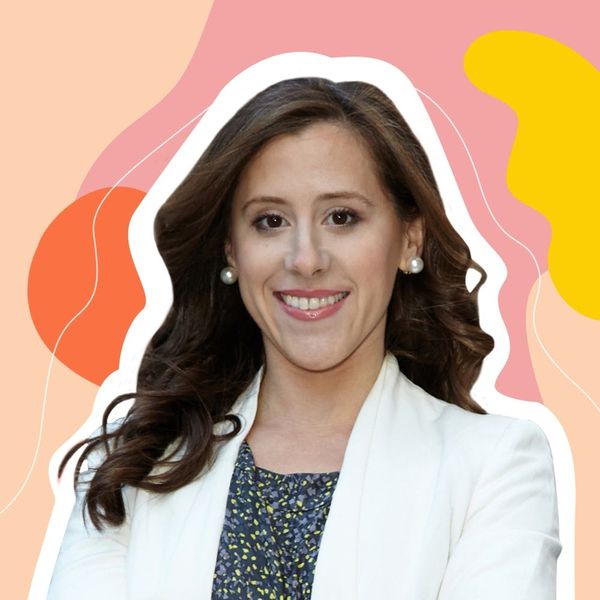 If there’s one thing we can take away from the 2016 election, it’s that you don’t have to be a career politician to win a seat in office. Which is among the countless reasons the 2018 election has emboldened an exponential amount of women — particularly younger women — to get their names on the ballot. Among those newcomers is Republican Naomi Levin, a software engineer and daughter of Soviet Union refugees who is challenging New York Democratic incumbent Jerry Nadler for the Congressional seat.

“As an engineer, someone who is trained at solving problems, I know how to find practical and scalable solutions,” Levin says. “So that’s how I’m approaching policy. In my job, I was fixing bugs every day and we have so many metaphorical bugs to fix and so many things we can do be doing better. We just need to have that pragmatic approach.”

Levin says she hopes this will be “the year of the Republican woman,” and shift the political discourse back to the issues. After pushing through the primaries, she has her eyes set on a November win that will allow her to focus on national security, education and tax reform.

B+C: What inspired you to run for office?

Levin: I’ve always been involved in politics. My family history is very interesting and had a huge impasse on me. My parents came from me from the Soviet Union and they instilled in me a very deep appreciation of our American values and our freedoms. And I do believe we have the greatest set of values known to mankind in our country and we need to always be reaffirming those values and protecting them. More immediately, I got involved in 2015 when I found out that Jerry Nadler voted for the Iran nuclear deal, which was a betrayal to his constituents and decided to do something about it and that empowered me. I immediately became an activist. I started volunteering for the campaign for the man who was running against him in the 2016 election and spread the message to activate our communities. I started getting more and more involved and one thing lead to another, and I was recruited to do it this time around.

B+C: What are the main issues you’ll fight if you win?

Levin: I think our focus should be on three key issues: one is strengthening our national security. The second is expanding education opportunities. And the third is lowering our outrageous tax burden in New York. I think that we need to protect American interests. We have to protect our country and prevent Iran from becoming a nuclear power on a physical level. We need to protect our culture. To make sure Americans are able to get the education that they need for their children so Americans are prepared for the future, which is going to be in business and technology.

Being someone who has been a leader on the forefront of emerging technology and in tune with that community and the growing sector that we’re seeing and expanding STEM programs, including those geared towards women in tech. I’m also a big proponent of school choice. We have some excellent charter schools in our district and a very sizable waiting list of parents waiting for their children to get in, so we know that there’s a need for it and we can direct our federal funding there. In terms of our tax burden economically, we need to keep growing our economy because that’s what creates opportunity and allows us to reinvest in the underprivileged people as well. In New York, we have a very heavy tax burden and there are things that can be done on the federal level to alleviate that burden for New Yorkers. We can be removing the housing rent expense from federal income tax. All insurance-approved medical costs as well and some other things.

B+C: What are some of the biggest challenges in your campaign so far?

Levin: Being a young grassroots candidate, I’m going against a very powerful incumbent. That’s a challenge on its own. At the same time, this is the time for somebody like me and creates an opportunity because I think that people are looking for a fresh perspective and somebody who is not a partisan politician. But it’s also challenging. I don’t have access to the same fundraising opportunities that he does, and he’s very entrenched. That’s probably the biggest challenge. A lot of it has been crowdfunding for fundraising, just finding support through every which way. Reaching out to a variety of groups and people, trying every avenue and finding those people who want to support me to help.

We have a lot of volunteers as a result, just bringing awareness of what I’m trying to do. A lot of people have gotten interested organically. I have an incredible team and have been gaining momentum on a national level. When I was on Fox Family and Friends talking about the disturbing trend of socialism that’s been burgeoning and how I’m the answer to that: I’m a grassroots, Millennial candidate. That propelled a small recognition. I was on Larry King last week, talking about the extreme stance in Washington and how the mission of my campaign is to bridge the divide and bring the focus back to the issues.

B+C: As a candidate among a new generation of women running for office, where do you see your impact at being different from your predecessors?

Levin: As a first time candidate — I didn’t try running in the past, so I can’t speak to that — I think there’s a lot of opportunity for women today. I know that there’s twice as many women running for Congress than the 2016 election. Most of them are Democrats, and there’s fewer Republican women running, but it’s the year of the Republican woman in many ways because we’re running on what we stand for, not what we stand against. I think the Republican candidates that I’ve spoken for and myself, we’re not focused on resistance and obstruction. We’re focused on helping Americans and finding ways to improve different services in our country. I think there’s a tremendous opportunity for support for us, as well as anyone that has that focus.

B+C: Being a younger Republican woman, what issues do you think are important to you not only as a Republican, but as a woman?

Levin: As a Republican woman, I think we need to keep our city and our country safe. We need to expand education opportunities and we need to keep living in New York affordable. An important thing I am advocating for is to increase STEM education programs to expand opportunities for women and get them interested in tech. And those are issues that directly affect me that I’m fighting for.

B+C: Immigration is one of the leading controversial issues affecting the country right now. Coming from a family of immigrants, how does this factor into your position on immigration reform?

Levin: It is a huge issue and I think we need to pass immigration reform. Unfortunately, my opponent votes no on every bill the Republican majority will present because of his partisan politics. Whereas I think we need to look at every policy and see what we can do better. I do think that America is a country of immigrants, built by immigrants, but we’re also a country of law. People like my parents who are immigrants, they fled persecution and came here looking for the opportunity to work hard. We should be taking in these kinds of immigrants who want to contribute and not just those who are looking for benefit from our social net. That merit-based immigration will be important.

B+C: How do you make that determination?

Levin: Language abilities, educational qualities, there’s a whole series of questions that people are asked to determine. This is what the experts do.

B+C: What have you learned by being a Republican in a very Democratic city?

Levin: What I’ve learned is that so many Democrats are disillusioned with what they see as a big polarization in their party and a focus on partisan politics. I’ve met so many people who are open and excited about someone who wants to focus on the issues, work across the aisle and doesn’t want the focus to be on partisan politics anymore. It’s actually been really encouraging to see that.

B+C: What advice would you give to women who are interested in running for office?

Levin: I would say that always say and do what you think is right, not what is advantageous in the moment because in the long run, you’ll be grateful that you did.

B+C: How can people support your run?

Levin: My website is naomiforcongress.com. We need support in terms of donations. People can sign up to volunteer if they live in the New York area. And they can sign up for my newsletter as well to stay updated on the race. I’m @naomilevinny on social media.