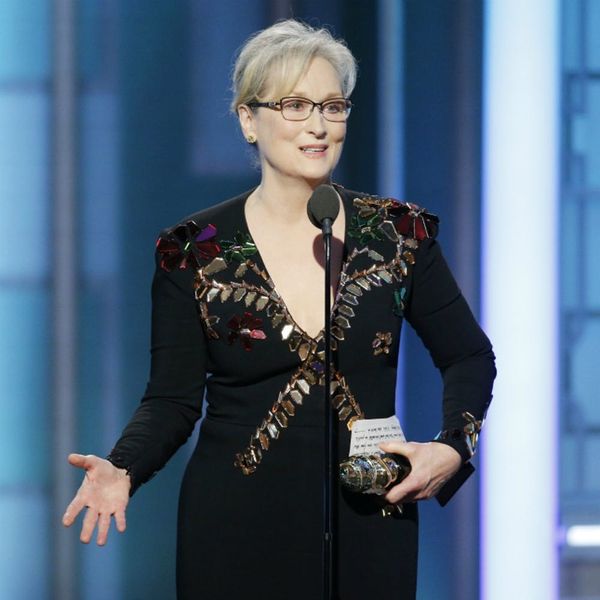 The Golden Globes are usually the most relaxed of all the big awards shows. With a bottle of Champagne on every table and an open bar, the vibe is decidedly not stuffy. While we usually expect that the show is going to be a bit more funny and “out there” than, say, the Oscars, we’re always surprised by something that happens during the telecast. Usually that unexpected moment comes from the host, like when Ricky Gervais made some pretty unfunny remarks about Caitlyn Jenner last year. But this year, we’ve been damn near floored by the words of Cecil B. DeMille Award recipient Meryl Streep.

The actress, who shies away from the red carpet these days, has been known in Hollywood for over 40 years as a person who speaks her mind. In her acceptance speech (which she obviously prepared ahead of time, since she knew that she was getting this lifetime achievement award), Meryl focused on the organization that created the Golden Globes, the Hollywood Foreign Press, to share her views on the political climate in the country right now, and it had all of us (including her) in tears.

Starting with Hollywood, the star talked about how a certain high profile, and soon-to-be high powered person openly mocked a journalist with a disability earlier in the year and how that’s stuck with her, because it wasn’t a movie; it was real life. She openly wept as she told us all that allowing people in positions of power to say and do such vile things without repercussion is to give those people a free pass. And that we can’t allow this to stand as we go forward as a nation.

She continued by calling out celebrity after celebrity, naming the country where they were born. She did this to point out that Hollywood (and the US) is made up of foreigners as well as native-born individuals, and if we are prepared to single out every single person of foreign birth, Hollywood and the whole country will be boring AF (“All you’ll have left to watch is football and MMA and that’s not art”).

Finally, Meryl Streep tore the roof off the Globes by urging everyone in the room to work together to protect the press. Mentioning how the founding fathers of the nation ensured freedom of the press when drafting the constitution, she called us all in and asked that we all do everything to protect the right of the press to speak freely and openly about the lies that a certain-someone-whom-she-never-named continues to say.

Meryl closed her speech by quoting her recently departed BFF Carrie Fisher, quoting her (genius) friend, and saying, “Take your broken heart. Make it into art.” If we don’t take the pain we are faced with and turn it into something positive and beautiful, that pain and ugliness will win, and in 2017, faced with an uncertain and terrifying future, there’s not much else we can do.

How will you take Meryl Streep’s words to heart and turn them into action? Tell us @BritandCo!

Kat Armstrong
Kat has been a writer, social media maven and mom for longer than she's willing to admit. She's also spent time in front of and behind the camera, interviewing celebs, politicians and acting as a producer for fashion and artistic photography shoots. When she isn't writing for various orgs and publications, she's hanging with her kids, husband and French Bulldog, Peter, in Toronto, Canada.
Golden Globes
Pop Culture
Golden Globes Politics