How to Make Mexican-Style Corn 2 Ways! 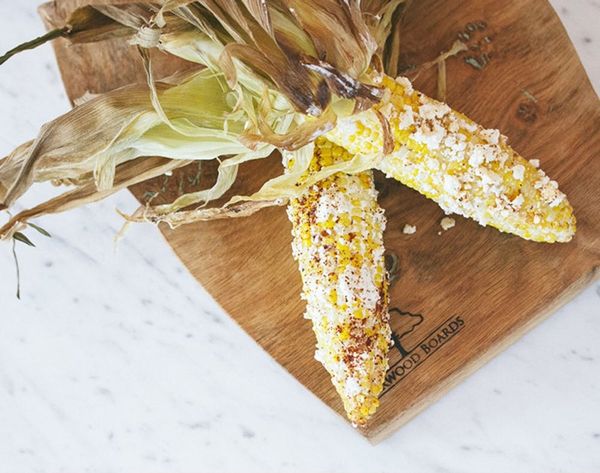 What better way to manage the rising summer temperatures than by whipping up a spectacular side dish that is seriously authentic? We’re preparing the summertime staple Mexican-style street corn two different ways: On AND off the cob! The first, a fork-free snack that’s perfect to chomp on poolside or grill-side, and the latter, a zesty topping to serve at your next dinner party. No need to flag down the taco truck — grab your spices, and bring these Latin vibes into your kitchen.

Mexican Street Corn on the Cob

1. Partially peel back cornhusks. Make sure to remove all corn silks/hairs.

3. Apply butter, salt and pepper liberally to the corn.

4. Place the corn with husks onto a pan with aluminum foil. Bake for 20 minutes.

5. Remove from oven, and roll each corn on the cob in Mexican crema.

6. Top with each corn on the cob with crumbled queso fresco.

7. Squeeze lime juice over the corn.

Resist your instincts to peel the corn ALL the way. Just yank the silk-less husks down halfway and then butter them up, add salt + pepper and stick them in a 400 degree F oven until the corn starts to turn golden brown and the husks darken, about 20 minutes.

When they’re out of the oven, it’s time to dress them up! Slather on crema, crumble on the cheese, dust on chipotle pepper and dig in! The flavors are unreal — you WON’T be able to eat corn on the cob ever again without these toppings! #sorrynotsorry

Mexican Street Corn Off the Cob

2. Apply butter, and then salt and pepper to the corn.

3. Heat a skillet to medium heat and place the corn on the cob onto the pan or griddle.

4. Rotate corn every five minutes or as kernels begin to brown.

5. Remove from skillet after cooking on each side.

6. Toast pepitas in the same skillet on low heat with 1 tsp. of butter and salt.

Butter up your corn (hey, hey corn!), season each cob and then place on a pan over medium heat and turn each ear until the kernels are browned (psst, if you’re feeling risky, you can toast your corn over a direct flame! Just keep a watchful eye on ’em).

Now get excited! Time to add the toppings… don’t they look um-um good?

Carefully remove the kernels from the cob with a sharp knife and toss the charred pieces with all the toppings and mix. Finish with cumin, cayenne, lime juice + fresh cilantro and toss one last time! Then V2 is ready to serve.

Garnish with a slice of lime (we can never get enough of that citrus!) and then, you have two choices: A) Eat as is or B) Use it as a topping on steak tacos, hearty salads or as a veggie side dish paired with avocados.

¡Felicidades! Enjoy your Mexican street corn — whichever way you prefer — with a side of guacamole, some carnitas tacos, a margarita (duh!).

What’s your favorite summer staple to cook up? Tell us about your go-to hot-weather recipes in the comments below.