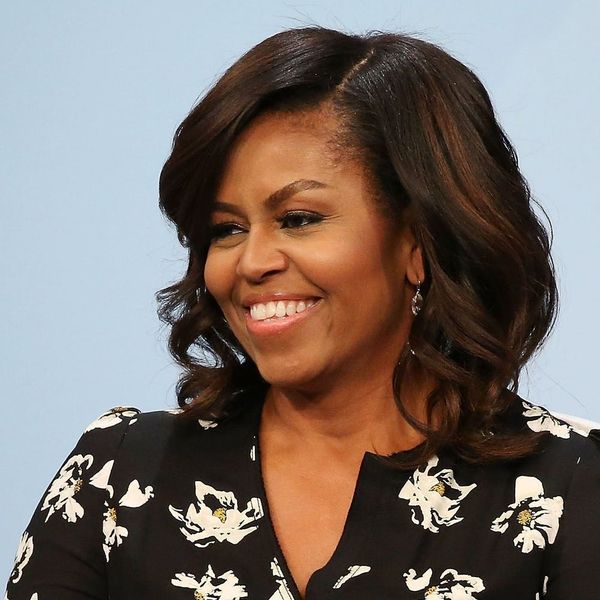 Former First Lady Michelle Obama doesn’t live in the White House anymore, but she’s still a leader, a role model, and a bit of a rock star to her fans. Barack and Michelle Obama‘s supporters also have soft spots for the duo’s two daughters, Sasha and Malia, who grew up in the public eye inside the White House. Which is why people are talking about the former FLOTUS’ revelation in her new memoir, Becoming, that she used in-vitro fertilization (IVF) to have Sasha and Malia following a heartbreaking miscarriage.

In a conversation about her new book, which releases on Tuesday, Obama told ABC’s Good Morning America that the experience of miscarrying more than 20 years ago made her feel “lost and alone.”

“I felt like I failed, because I didn’t know how common miscarriages were,” she said. In fact, 10 to 25 percent of “medically recognized” pregnancies end in miscarriage, according to the American Pregnancy Association. She writes in her book that it was difficult to conceive the first pregnancy, which resulted in the miscarriage, and then sought IVF treatments in order to conceive her two girls.

Obama lamented to Good Morning America‘s Robin Roberts that many women do not open up about miscarriage, despite how common it is. IVF treatments are pretty common, too. The treatments are expensive, especially without medical insurance, but IVF is used regularly by patients who struggle with fertility but still want to be pregnant and have a baby. IVF is also a go-to for gay couples who want to have children who are related to their family biologically. CDC data shows that between one and two percent of babies born in the US each year are conceived using IVF.

And even though IVF is relatively common and safe, it’s come under attack in Alabama. One of the more deeply red states in the nation, Alabama recently passed a new amendment to its state constitution that effectively regards fertilized eggs as people. The legislation primarily targets abortion, but Rewire News also reports that IVF treatments could be impacted. So-called “personhood laws” make it technically illegal for IVF clinics to create embryos and freeze or dispose of fertilized eggs.

As long as Roe v. Wade is still federal law, enforcing this amendment would likely result in lawsuits, but given how unsure the fate of Roe is under this Supreme Court, it’s not outside the realm of possibility that Alabamans could see their reproductive rights further stripped in the near future.

Alarmingly, a similar bill was introduced to Congress by a Georgia Republican last year. Other such laws have been cropping up in states like Arizona and Pennsylvania in the past yea.

Alabama legislators already make reproductive care a massively difficult undertaking, especially for poor and working-class residents. In 2014, less than half of the state’s hospitals offered OB/GYN care, forcing some women to drive many miles in order to give birth. The state also has laws on the books that require abortion providers to give information to patients that may discourage them from having an abortion, and requires patients to wait 48 hours between an abortion consultation appointment and the abortion itself. By attacking IVF treatments in addition to OB/GYN care and abortion, Alabama is making it extremely difficult for people to make their own choices about their families.

Michelle Obama’s uplifting story of successful IVF treatments after miscarrying is just one of many examples that shows how important it is for everyone to have access to the kind of medical care they want when it comes to family planning. For some parents, IVF is the best option for having kids, and they should be able to use IVF if they want to. The same goes for abortion, birth control, and all reproductive care. As elected officials continue to attack how people do or do not have babies, it’s important to remember that we all deserve access to the care we need and want, without any laws stopping it.

Elizabeth King
Elizabeth King is a politics, history, and culture writer based in the Twin Cities. She is generally pretty cranky but still enjoys traveling, music from the early 2000's, and plotting the resistance. Feel free to say hi on Twitter at @ekingc or check out some of her work at www.elizabethcking.com.
Politics
Womens Health
Politics Womens Health
More From Womens Health