Sasha + Malia Obama Are All Grown-Up (and Stylish!) at Their First State Dinner 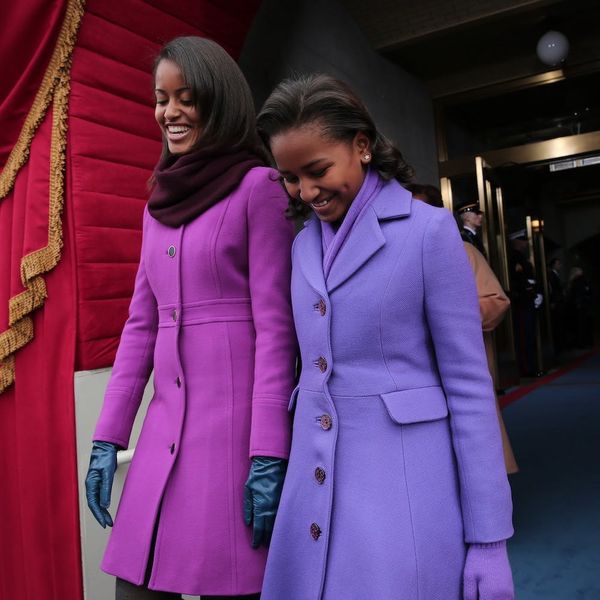 Last night, President Obama and First Lady Michelle played host to Prime Minister Justin Trudeau and his wife Sophie Grégoire-Trudeau, along with a slew of other very important people at the White House for a seriously stylish state dinner. The event held in honor of the Canadian prime minister was also the first state dinner that first daughters Sasha and Malia Obama got to attend. Photos of the teens have emerged, and the Internet is going wild over how gorg and fashion-forward the two lovely young ladies are looking. TBH, we’re also a little misty-eyed at how quickly they’ve grown up.

Here’s Sasha in a high-necked gown with an intricate and gorgeous lace design. Her hair is pulled into the perfect boho messy-braid updo. And is that a black choker necklace we spy? Soooo ’90s and on-trend. Stealing all these ideas for our next formal sit-down dinner!

Her sister Malia opted for a strapless taupe gown, offset with hints of rhinestones. She also sported perfectly coiffed old Hollywood glam curls. We weren’t the only ones moved by the young ladies’ grown-up looks. During President Obama’s opening remarks, he said of his daughters, “When I was first elected to this office, Malia was just 10 and Sasha was 7. And they grow up too fast. Now Malia is going off to college… And I’m starting to choke up.” Oh my, the heart squelches!

Prime Minister Justin Trudeau, who is also the son of a former Canadian prime minister himself, knows what it’s like to grow up in the spotlight. “Quite frankly, the memories for me of being a kid and not being old enough to attend these kinds of events with my father almost makes me wish I had gone through my teenage years as a child of a world leader — but not quite,” he joked. Then speaking to the first daughters, he said, “I admire you very much, both of you, for your extraordinary strength and your grace, through what is a remarkable childhood and young adulthood that will give you extraordinary strength and wisdom beyond your years for the rest of your life. The one thing that you have received from your extraordinary parents is the tools to be able to handle the challenges and the opportunities in front of you. ” Awww.

It certainly can’t be easy growing up so publicly, but it seems like Sasha and Malia are handling it with plenty of grace.

Are you amazed by how much Sasha and Malia have grown up? Tweet us @BritandCo!

Desiree O
Desirée O is a ‘Professional Bohemian’ who loves anything and everything related to the arts, entertainment, and pop culture. She ADORES being a ‘Newsy’ for Brit + Co, covering all of the latest tidbits of awesomeness that you want to read about. When she’s not writing, she’s either making messy art, going on long adventurous walks with her camera, or poking around over at bohemianizm (http://www.bohemianizm.com/). You can find out about Desirée O and her work at http://DesireeO.com/ or follow her on Twitter @DesireeO.
Style News