Miley Cyrus Is Wearing Her Engagement Ring Again… So What Does That Mean? 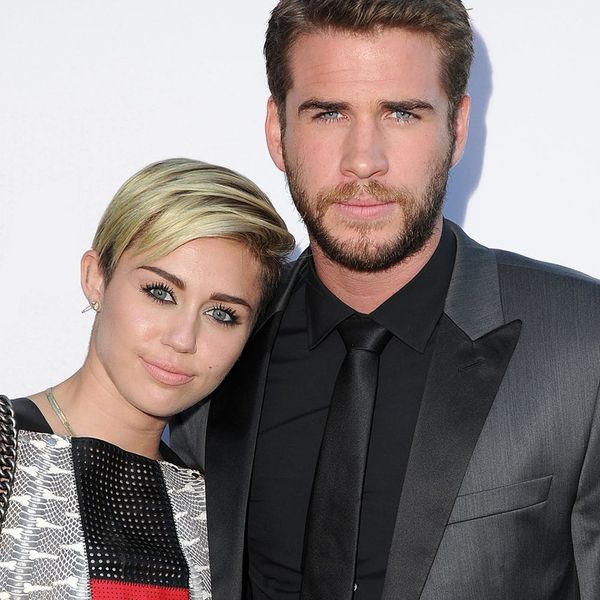 There are those celebrity couples who split in the most dramatic, Hollywood-approved way ever (Robin Thicke + Paula Patton, we’re looking at you). Liam Hemsworth and Miley Cyrus’s called-off engagement was more like one of those breakups that really crushed us because it seemed so, well, real. Since Miley has been spotted wearing her engagement ring recently, rumors are flying that the couple – who dated for five years and split back in 2013 – might just be back together.

While the breakup was unexpected, it seemed like the catalyst for Miley to finally become the real Miley – the leotard wearing, rave jewelry loving girl whose Instagram makes us feel like we’re on an acid trip. When Barbara Walters asked Miley about the reason behind the breakup during a TV special in 2013, Miley told her, “I was so scared of ever being alone, and I think, conquering that fear, this year, was actually bigger than any other transition that I had, this entire year. I don’t ever want to have to need someone again, where you feel like, without them, you can’t be yourself.” Understandable and actually super commendable, Miley.

Even though their breakup was so unexpected and public, it seems like neither have any ill will toward each other. Miley told Love Magazine, “We still talk and communicate. I was with him since I was 16 and nothing’s ever going to make that go away. I’ve known this guy all that time and if it doesn’t work out I can still smile and love him and he can love me and that’s great, that’s the way to be.”

Similarly, Liam told Elle, “I mean, look—we were together five years, so I don’t think those feelings will ever change. And that’s good because that proves to me that it was real. It wasn’t just a fling,” he said. “It really was an important part of my life and always will be,” he continued. “She’s a free spirit. I think she’ll always surprise people with what she does, but she’s not a malicious person in any way. She’s a young girl who wants to do what she wants to do.”

So, what happens when you gone off on your own independent journeys but still have feelings for one another? Well, you reconnect, of course. And it seems that’s what’s currently going down in Miley and Liam land. The two have been the focus of relationship rumors ever since Miley helped Liam adopt a puppy back in November. Even more, she also rang in the New Year at the Falls Music Festival in Byron Bay, Australia with Liam and the rest of the Hemsworth family.

Now, as a cherry on top of the true love flavored cake, Miley was just spotted wearing what looks very much like her old engagement ring – not once but TWICE. She was seen rocking the bling while at JFK airport and also posted a selfie on Instagram where she is very clearly showing it off. Of course, Miley hasn’t made any comments about the ring’s reappearance, but a picture speaks a thousand words, right?

So, onto the million dollar question: Are Liam and Miley engaged again? Our vote? Probably not. Are they back together? Maybe. And if that’s the case, Miley might be wearing the ring as a sort of symbol of their reconnection rather than their upcoming nuptials. Does a diamond on your ring finger traditionally mean you’re set to marry? Sure. But Miley has never been one for tradition.

Why do you think Miley is wearing her old engagement ring? Share with us on Twitter @britandco.