My Immigrant Parents Made Me a Global Citizen. As a New Mom, I’m Passing That Gift to My Daughter 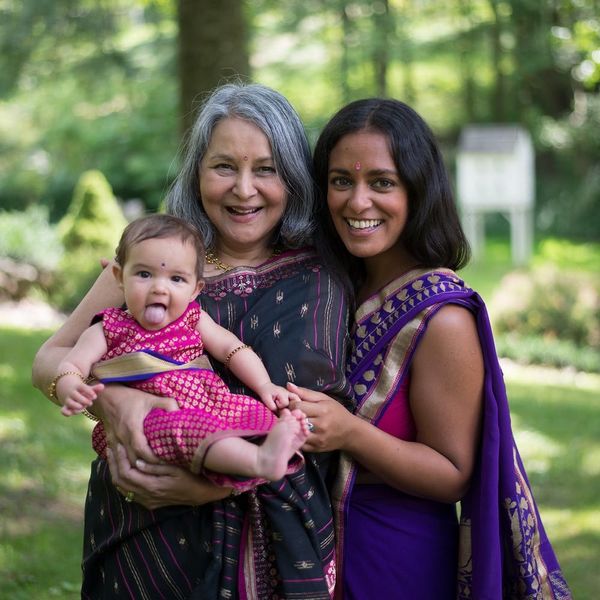 Brit + Co staffers' stories on immigrant heritage and the lessons of an American dream.

When I think about how being the daughter of two Indian immigrants has shaped my life and identity, the first thing I ask is: “How has it NOT shaped my entire being?"

My parents immigrated from India to the US in the late '60s. True to Indian immigrant form, they were overachievers who came to the states to up-level their education — my dad got his masters in industrial engineering at Berkeley and my mom got her PhD in Psychology at Cornell and NYU. They settled down in New Jersey, where my brother and I were born, and then Connecticut.

I grew up surrounded by vibrant colors and patterns mixed and matched every which way, the aromas of Maharashtrian cuisine, and legit thought every Indian person I met was related to me. True story. I grew up in Connecticut and then Utah, not exactly the most diverse of places, and most Indians I met *were* indeed related to me. I spent many summer and Christmas vacations visiting family in India, but always craved more of a connection to what I felt was my homeland.

After college, my now-husband David and I decided to live in India for six months. A fellow second-generation American (British parents, moved here in the '70s), we both had this feeling of being not-quite-American, but also being not-quite-Indian/British. Turns out, he too had a major connection to India — three out of four of his grandparents were born in India while it was under British rule. Yeah. Weird. Kind of amazing. His grandfather's memoir waxes poetic about his time in Amritsar, as a general in the Indian army. He lived in the same small town in Sri Lanka as my great-uncle.

While in India, I distinctly remember the strangeness and beauty of being both Eastern and Western at the same time. Talk about a 22-year-old identity crisis. After our six months in India, we came back to the states and I'll never forget what struck me the most: As we made our various flight connections on the journey home, it wasn't until we got to JFK that the people greeting the plane said the two simplest and most meaningful words after a crazy year of travel, “Welcome home."

Being the daughter of immigrants in America has, for most of my life, been incredibly empowering. My parents took a huge risk with the hope of building a bright present for themselves, and an even brighter future for my brother and me. They made sure I stayed connected to India through family, food, and art. I deeply value the fact that they brought me up as a citizen of the world.

I've always felt that I could live anywhere, turn my dreams into realities, and this is largely due to their confidence in me and optimism about the importance of immigrants in the fabric of America. Now, as a mother myself, I'm doing my darnedest to instill that same sense of inclusivity and belonging in my daughter Anokhi. I want to make sure that she feels Indian, British, American, and anything else she identifies with.

In my day to day life, my immigrant heritage hugely influences my work. My affinity for intricate patterns, saturated color palettes, and metallic details can clearly be traced back to my Indian roots. I want everything I help create to fill the senses, spark wonder and human connection, much like India itself.

Anjelika Temple
As Co-Founder and Chief Creative Officer of Brit + Co, Anjelika Temple brings her voracious consumption of all things creative and colorful to DIY projects, geeky gadgetry finds and more. When she's not DIY-ing her heart out, you'll find her throwing dinner parties with friends or adventuring with her husband David, their daughters Anokhi and Indira, and their silly dog Turkey.
Daring to Dream
Empowerment
Daring to Dream Immigration community stories
More From Empowerment