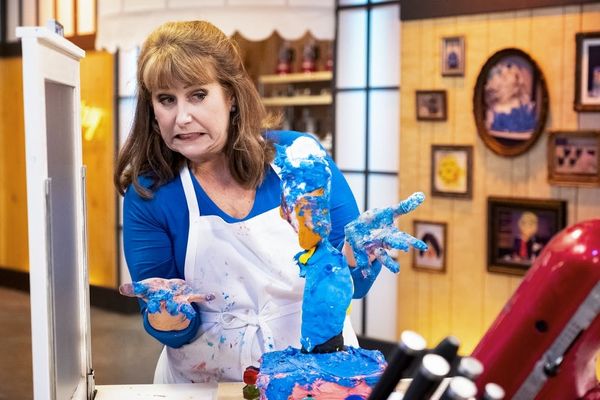 ‘Tis the season for baking fails! And thanks to Netflix’s Nailed It! Holiday!, there are some truly epic (and festive) kitchen catastrophes in store for us (and host Nicole Byer) next month.

“Don’t you just love the holidays?” Byer asks fellow judge Jacques Torres as the two stand next to a fake fireplace adorned with garland and stockings. Torres tells Byer he’s happy as long as they’re together — until she reminds him that they’ll be eating some things that are “pretty… awful.” And judging by the rest of the trailer, she’s not wrong.

“What is this?!” the comedian exclaims while trying to comprehend one particularly spectacular fail. And there are more culinary disasters where that came from. Check out the quick glimpses of crumbling cakes, a mound of ruined Rice Krispies, and what appear to be some questionable fondant-melting dessert pops.

Fortunately, Byer and Torres won’t have to suffer alone. As in seasons 1 and 2, every episode will feature a guest judge. And according to Eater, this season’s judges include Jason Mantzoukas (Brooklyn Nine-Nine, The Good Place), Lauren Lapkus (Crashing, The Big Bang Theory), Netflix magician Justin Willman, wedding cake legend Sylvia Weinstock, and stand-up comedian Ron Funches.

In each episode, the panel of judges will challenge three amateur bakers to recreate a professional Pinterest-worthy dessert. Whichever brave baker comes out on top (i.e.: whoever fails the least) will take home $10,000.

Have you ever had a major baking fail? Let us know @BritandCo!

Desiree O
Desirée O is a ‘Professional Bohemian’ who loves anything and everything related to the arts, entertainment, and pop culture. She ADORES being a ‘Newsy’ for Brit + Co, covering all of the latest tidbits of awesomeness that you want to read about. When she’s not writing, she’s either making messy art, going on long adventurous walks with her camera, or poking around over at bohemianizm (http://www.bohemianizm.com/). You can find out about Desirée O and her work at http://DesireeO.com/ or follow her on Twitter @DesireeO.
Netflix
TV
Netflix Streaming TV
More From TV