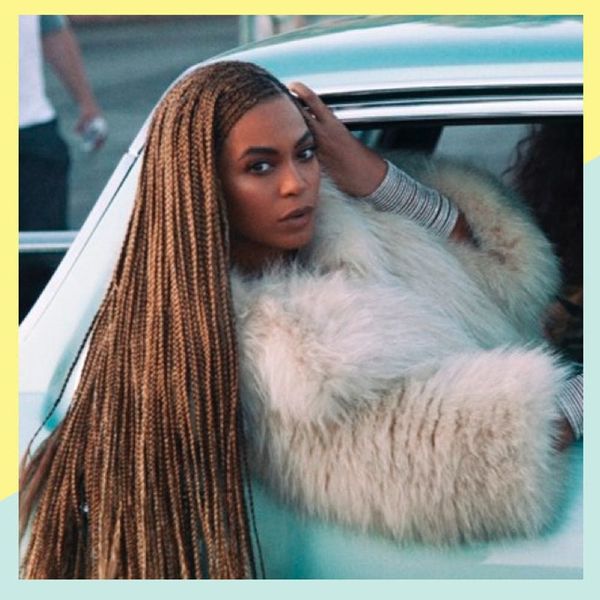 Today is National Braid Day, and as it turns out, there are a slew of celebrity braided hairstyles that we are obsessed with. From Bo Derek's controversial cornrows to Brandy's signature box braids, our favorite styles have become downright iconic. Whether you love Blake Lively and Sienna Miller's intricate red carpet looks, or Judy Garland and Carrie Fisher's most famous braids on film, these 15 braided styles embody unique takes on the classic style.
Beyoncé's "Formation" Braids: Over the years, Queen Bey has worn many different types of braids, but it's her Lemonade-era looks we love the most. As her stylist, Kim Kimble, pointed out to Refinery29, the braids in this video were no accident. Kimble said, "She started her career in braids, so that is a throwback, in a way." (Photo via Columbia Records/Parkwood Entertainment)
Bo Derek's 10 Braids: In 1979, the young actress became a pop culture legend when she appeared on screen, walking on the beach in beaded cornrows. Creating what People magazine referred to as a "cross-cultural craze," the style long attributed to African heritage suddenly became mainstream. The look continues to stir controversy, such as when Kim Kardashian West copied the cornrows and called them "Bo Derek braids." (Photo via Alan Band/Keystone/Getty)
Alicia Keys' Cornrows: Since the release of her debut album in 2001, Keys has shown off plenty of hairstyles, from natural to sleek and everything in between. But we're partial to her "Fallin'" era beaded braids, which helped cement her signature style. (Photo via Anthony Barboza/Getty)
Britney Spears' "...Baby One More Time" Pigtails: When the legendary Ms. Britney Spears burst onto the scene with her debut music video back in 1998, she became a pop princess in the making in no small part thanks to her naughty schoolgirl outfit, complete with pink pom pom braided pigtails. (Photo via Jive Records)
Lisa Bonet and Zoë Kravitz Mico-Braids: Like mother, like daughter! Bonet has been a style chameleon since her days on The Cosby Show, but she's made her waist-length locks her signature, passing the stunning style to daughter Zoë. (Photo via Jon Kopaloff/FilmMagic/Getty)
Judy Garland in The Wizard of Oz: Sure, we'll always remember her ruby slippers and blue and white gingham dress, but we've also got to give props to Dorothy's famous pigtail braids, which she tied together in the sweetest bows. (Photo via Silver Screen Collection/Hulton Archive/Getty)
Janet Jackson's Box Braids in Poetic Justice: The singer and actress wore box braids as Justice in the 1993 film, and Jackson's role helped give representation to young black actresses. For the film's 20th anniversary, director John Singleton revealed the inspiration behind the style, telling Essence, "That was a collaboration between myself, Janet, [dance choreographer] Fatima Robinson and a dancer named Josie Harris. Josie had the braids in Michael Jackson’s “Remember the Time” video, which I directed. I brought her and Fatima and a couple of other dancers over to hang out with Janet and they all became friends. I said, "Why don’t we try and do Janet’s hair like Josie’s hair?" We got the hairstyle from Harlem and just put it in a West Coast movie." (Photo via Anthony Barboza/Getty)
Lauren Conrad's The Hills Side Braids: When Conrad graduated from Laguna Beach High School and made her way for the Hollywood Hills, she brought with her a now-famous style: the side braid, which fashionistas everywhere still copy to this day. The California cool girl look is easy for anyone to pull off, especially come festival season. (Photo via Kevin Mazur/WireImage/Getty)
Stacey Dash's Clueless Long Braids: Though Dash was 28 during filming, she portrayed a Beverly Hills high schooler in the cult classic romcom effortlessly, giving Dionne her signature 'do by way of long braids which she wore throughout the 1995 film. Change her look? As if! (Photo via Paramount Pictures/Getty)
Sienna Miller's Halo Braid: Miller's look at a 2007 Golden Globes after party is one of our favorite boho moments of all time, thanks to her beachy halo braid, which continues to give us style inspo more than a decade later. (Photo via L. Cohen/WireImage/Getty)
Venus and Serena Williams' Beaded Braids: The two sisters have dominated the tennis court since the early '90s, and though they've experimented with plenty of other hair looks over the decades, we'll always have a soft spot for their colorful beaded braids, which they wore on and off the court throughout their teen years. (Photo via Clive Brunskill/Allsport/Getty)
Blake Lively's Fishtail Braid: Lively has some of the most enviable tresses in Hollywood, and she's made a long, sideswept braid her go-to, serving up mermaid realness every chance she gets. (Photo via Stephen Lovekin/Getty)
Brandy's Thick Braids: When the singer first stole our hearts as Moesha on her titular UPN show, she often sported microbraids, but as she got older, the "Wildest Dreams" singer tried out tons of different braided styles, looking gorgeous with each look. (Photo via Angela Weiss/Getty)
Carrie Fisher's Princess Leia Braids: As one of the most recognizable and influential film characters of all time, Fisher made Princess Leia a star on every galaxy thanks to her hair, which she wore in three styles across seven films. Whether you love her milkmaid braids, her braid crown, or her space buns, Leia's style is a piece of pop culture history that we're always going to obsess over. (Photo via Disney/Lucasfilm)
Sade's Long Side Braid: The record-breaking R&B singer has worn her hair in a slew of styles, but her most famous one comes from the mid-1980s, when she hit the scene with a super-long, super-sleek rope braid and a bold red lip. Flawless! (Photo via Paul Natkin/WireImage/Getty)

Arielle Tschinkel
Arielle Tschinkel is a pop culture junkie who went to NYU because the Olsen twins went to NYU (really). She is a freelance writer whose work has also been featured on HelloGiggles, Refinery29, SheKnows, Bustle, Hollywood.com, and many others; and she's living her dream one Britney Spears GIF at a time. Follow her on Twitter @mrstschinkel or visit her website at arielletschinkel.com.
Braids
Hair
Braids Celebrity Hair