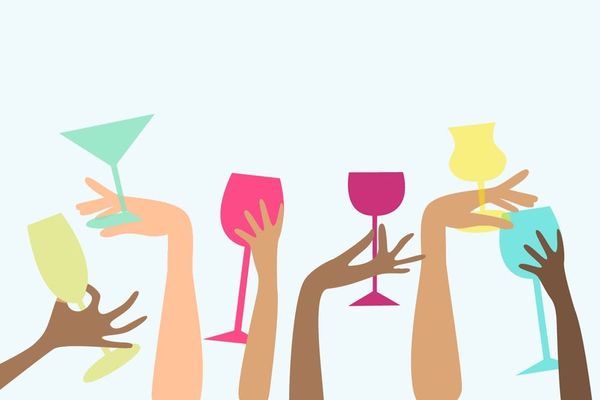 When you're often the life of the party and happen to be partnered up and in your 30s, you'll instantly turn heads when you say no to booze. I can personally attest to the difficulty of this. As someone who loves happy hour and has a particular affinity for lemon drop shots in totally inappropriate settings, there was no way I could get away with *not* drinking without inviting questioning looks.

Before I give you the guide to fake drinking when you're secretly pregnant, let me take this moment to make a PSA: If you see that a female friend of yours isn't drinking and she usually does, it's probably NOT very cool to ask her if she's pregnant. She might be secretly pregnant, she might be taking fertility drugs that can't be combined with alcohol, she might just be trying to lower her dosage of alcohol with the hope that it helps her get pregnant — or she might just be… not drinking. No one wants to be asked if they're pregnant, so stop that please!

Of course, not everyone is going to take my PSA seriously, so I've got some tips and tricks for all you pre-reveal preggos. These same tips apply to gals who are not drinking because they are trying to conceive — I was personally in this non-drinking camp for about five months before getting pregnant.

And how's this for proof? I organized and attended a bachelorette party for two of my very best friends with about eight of my other besties present — and no one had ANY idea I was pregnant. I'm a bona fide pro.

1. Opt for canned beer. This was one of my earliest discoveries in the world of fake drinking. No one can see your drink when it's in a can. You might read that and think, yeah so? Well, take that can with you to the other can, and dump it out in the sink. Fill it up with water and no one will be the wiser. In fact, they'll think — wow, she's really blasting through those Coors Lights. Pro tip: Be sure to wipe any water drips off the can before you leave the bathroom, and rinse the sink so there's no errant beer foam floating around.

2. If you have to order a real drink, choose a clear cocktail. This is the classic move. You creep over to the bar when no one else is around, and order a club soda with lime. Be sure to ask the bartender to serve it to you in a cocktail glass — a giant water glass or plastic cup is a dead giveaway. If it's impossible to get alone time at the bar, order a vodka soda (or gin and tonic). Then take it to the bathroom, dump out the liquid (use a straw to keep the ice and any garnishes in the cup), then fill it with water instead. Complain about the soda or tonic being flat if anyone questions your drink's lack of tiny bubbles.

3. Make friends with bartenders. At first, bartenders give you a bit of side-eye when you ask for a club soda in a cocktail glass. They won't ask you what the deal is, but you can let them assume what they like — especially when you order that second or third club soda in a cocktail glass. If you're feeling cavalier, and you and the bartender have really hit your stride, you can even say, “I'll take anything non-alcoholic that looks like a cocktail." I actually made SUCH good friends with a bartender at a wedding where I was fake drinking that every time I came over to the bar, he immediately winked at me and gave me “my regular." My friends guffawed at the fact that I was already friends with the bartender. Pro.

4. Allude to a possible tannin allergy. Wine is the toughest thing to fake, so don't even try. Tell your friends about how, out of nowhere, you've started to get headaches immediately after drinking a glass of wine. When they're like, “Is it just when you drink red?" reply with a frustrated sigh, “No, both red and white make me feel crappy — maybe it's a tannin thing?" Then get your faux canned beer or clear mocktail, and call it a day.

5. Ginger ale is a GREAT substitute for Champagne. Ginger ale looks like Champagne, it smells kind of like Champagne, and if your friends are tipsy enough and take a sip, they'll actually believe that it IS Champagne. Don't overdo this one though — too much sugary soda is not a good thing for you and your secret babe!

6. Pretend to be getting over a cold (so no one asks for a sip). [Insert fake coughs here]

7. Always be the one to order or serve a round of shots. Shots are one of the toughest things to fake. Like, really difficult. And you might be thinking, who still takes shots anyway? Well, the answer is: I do. Or rather, I did. It would have been impossible to be at my two besties' bachelorette party without at least one round of shots. So what's a preggo to do? Serve 'em up, of course. Because shots are best served as a surprise to inspire a second wind in any given party, you can creep into the kitchen to set things up. Pour all but one, and fill that one with a substitute. Ideally, it looks like what you're serving, and if that's not possible, make 3-5 of them vodka shots including yours, which is actually… water! If ordering shots at a bar, you're probably already friends with the bartender, so just ask him to make yours a fake one and to put a napkin or coaster under it on the tray that comes out.

8. Keep a drink in your hand at all times. This is an obvious one, but it's worth mentioning. If you don't have a drink on hand, someone will either hand you one or give you a hard time for not drinking. DO NOT give them that opportunity ;)

9. Never leave your drink unattended. Hopefully, you already have this rule in your wheelhouse from your college days. In this case, the key here is avoiding two things: friendly refills and someone accidentally picking up your drink and finding out it's phony.

10. Avoid being the first one to hit the hay. If you've already been squirreling around on the beverage front, the next clear sign that you might be secretly pregnant is when you're the first one to go to bed. So don't do that. Don't go to bed. Ever! Okay, at some point you'll need to go to bed because you need a TON of sleep in your first trimester, but avoid being the first party pooper at all costs. And don't use getting up early “for a run" or “to do some work" as an excuse for going to bed — friends that know you will see right through that.

And there you have it, all you need to know about being a fake party animal when you're in the very early stages of expecting. Cheers! (But fake cheers, obvs.)

What are your best fake drinking tips? Share them with us @BritandCo!

From Your Site Articles
Anjelika Temple
As Co-Founder and Chief Creative Officer of Brit + Co, Anjelika Temple brings her voracious consumption of all things creative and colorful to DIY projects, geeky gadgetry finds and more. When she's not DIY-ing her heart out, you'll find her throwing dinner parties with friends or adventuring with her husband David, their daughters Anokhi and Indira, and their silly dog Turkey.
Pregnancy
Health
Pregnancy
More From Health