3 New Books About the Radical Act of Female Agency 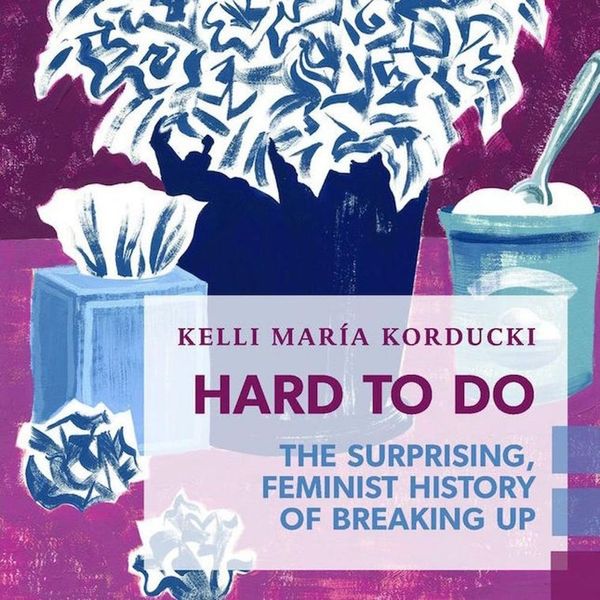 The ability to say “no” is an often-overlooked source of power. Many of us don’t appreciate the fact that we have it, or fully understand that, historically and presently, many groups of people don’t. It’s an economic and social privilege to be able to walk away from something that isn’t working, for any reason — a job, a relationship, a sexual encounter, a pregnancy — and an even bigger one to demand an equal share in income, rights, or pleasure. The three new books in this week’s book club acknowledge the strides we’ve made in women’s agency and also serve as manuals that show how much more work there is to be done.

<em>Hard to Do: The Surprising, Feminist History of Breaking Up</em>

i ($14): In 2014, Brit + Co editor Korducki did the unthinkable. In the midst of attending four weddings, she felt distinctly funereal; she was mourning a nine-year relationship with a “kind, sweet, smart, and good” man that she had decided to end while all her friends seemed to be settling down. Her reasons for the breakup weren’t the conventional, socially recognized ones; there was nothing “wrong” with the relationship, or the man. “It’s like scoring big in the lotto and torching your winnings for sport,” she writes. It was just that things, as they were, didn’t fit into the narrative of her dream life. Realizing that, a generation ago, she might have played it safe and stayed, Korducki became fascinated with the concept of the breakup through history, particularly as it applied to the comparatively recent concept of the romantic partnership.

“I wanted to get to the bottom of the cultural and economic developments that have enabled women like me to break up with stable and decent partners, or with any partners at all — and why, despite those developments, the decision to stay or go has remained so charged. When did it become so difficult to figure out not only what we should want, but what we do want? I wanted to understand where in history the material concerns and emotional ethics of partnerships had diverged in the first place — where and how it had become impolite to mention money and love in the same breath, as though their symbiotic relationship isn’t reinforced by holidays that celebrate consumption or carat counts on rings.”

Writing in a way that’s both academically sourced and journalistically accessible, Korducki gives us a sweeping and nuanced look at the social and economic factors that are inextricably linked to these partnered relationships. She takes us from the ancient Romans to the Austen era, from the Married Women’s Property Act of 1848 and 1857’s Dred Scott case to the modern-day narrative of “good guys vs. f*ckboys.” Her book both acknowledges and rejects the default white, cishet, middle-class narrative of history, and reports on trends while refusing to equate a trend with a universal societal experience. Throughout, the book links the ability to stay or go to something greater. It’s not just about dumping or being dumped; it’s about personhood and power. “Women, by and large, have been socialized to fend for ourselves for centuries,” says Korducki. “In an age of MRAs and white-supremacist man-mobs, it appears that our needs have outpaced the patriarchy.”

2. Moan: Anonymous Essays on Female Orgasm by Emma Koenig ($16): When Emma Koenig was 12, she watched a movie with a bunch of Hebrew school classmates while one of them felt up her nascent breasts over her sports bra. It was a relatively good experience; the boy asked for consent each step of the way, and she thought she had enjoyed it — except for the fact that she had no reference point to compare it with. “So while it was easy to feel good during it, I wasn’t sure how I was supposed to feel after it,” she writes. When her mother arrived to take her home, she found herself for the first time confronting the shame that often comes along with women’s sexual encounters. After telling herself she had nothing to be ashamed about, she vowed to become a “sexual warrior,” making sure she would never feel that way about a natural desire.

Of course, this was easier said than done: “I underestimated the lifelong obstacle course I would have to navigate as a woman,” from having to ditch the tank top at school because it might be “distracting” to boys, to generally being made to feel bad about not only being a sexual person, but just being a person. It came to a head, so to speak, after her first time having sex. She wasn’t having a good time, much as she tried, but her partner informed her after he was finished that she’d had an orgasm. “It was instant cognitive dissonance. I was being told something about myself that directly contradicted my reality.” She gently corrected the mansplained orgasm and gave her partner tips for the next time, but the next time was even worse. Feeling used and upset, she realized that she had been far more concerned with being polite than with being okay.

“When provided with every practical support option and no logistical restraints, women may inhabit motherhood wholly, but without compromising their relationship to their work or themselves.” Widger’s work of speculative fiction delves into one of the thorniest subjects related to women’s agency: pregnancy, and its attendant physical, emotional, time and monetary costs. Tessa Callahan, who once scored a disappointing four out of 10 on the RAW (reliability, accessibility, warmth) scale, is a high-powered Silicon Valley tech executive who founded two successful biotech startups before her current project, Seahorse Solutions. “She’d worked hard, harder than most people she knew, even here in Silicon Valley, where a forty-hour workweek was considered part-time…She’d earned her life.”
Ilana Lucas
Ilana is an English professor, theatre consultant and playwright based in Toronto, Canada. When she’s not at the theatre or insisting that literary criticism can be fun, she’s singing a cappella or Mozart, occasionally harmonizing with the symphony, or playing “Under Pressure” with her rock handbell group, Pavlov’s Dogs.
Book Club
Creativity
Book Club Books Goods
More From Creativity