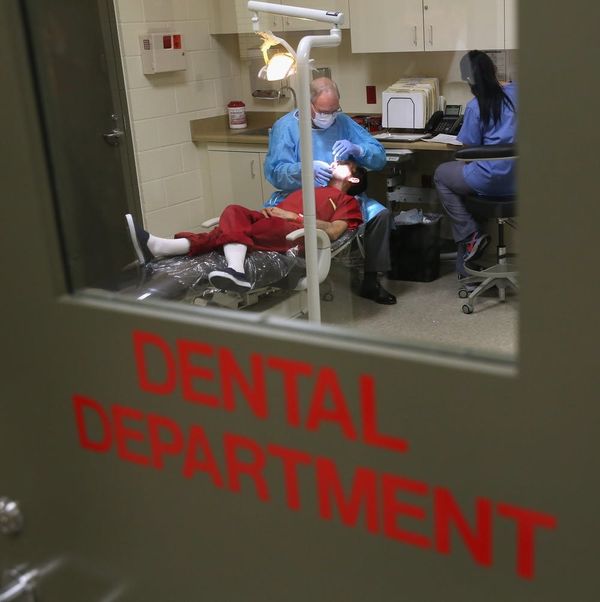 Nooses constructed from bedsheets hanging in cells. Tooth decay. Inadequate, or delayed, medical care. These are just some of the conditions uncovered in a surprise inspection of Adelanto ICE Processing Center, according to a new report from the Department of Homeland Security Inspector General.

One detainee is said to have lost multiple teeth after waiting more than two years to have cavities filled. A dentist reportedly recommended that detainees concerned about their oral health use string from their socks to floss their teeth, if they could not afford dental floss. (An ICE spokesperson responded that “ICE is concerned by the OIG’s findings” but went on to say that some of these findings lack context.)

The conditions reported in Adelanto are not isolated, and they aren’t new. For years, ICE detainees and their advocates have complained of sub-standard medical care and medical neglect in ICE detention. Medical abuse and neglect may end in death for immigrant detainees.

“Inadequate medical care is part and parcel of the system,” Alan Dicker of the Detained Migrant Solidarity Committee (DMSC) in El Paso, Texas, tells Brit + Co of ICE detention. There are currently around 30,000 people in immigrant detention facilities in the US, according to the Global Detention Project.

Recentreports from Human Rights Watch document “serious lapses in health care that have led to severe suffering and at times the preventable or premature death of individuals held in immigration detention facilities in the United States.”

Such “lapses” include a lack of sufficient care for Raul Ernesto Morales-Ramos, who died of cancer in ICE detention in 2015; though he exhibited symptoms and even “begged” for treatment, a nurse only gave him ibuprofen, according to a HRW report. The same report says that ICE failed to address vision issues in another detainee, who became legally blind, likely as a result of the lack of care.

Liz Martinez, the Director of Advocacy and Strategic Communications for Freedom For Immigrants, tells us over email that her organization “receives more complaints on medical abuse and neglect [of immigrant detainees]” from detainees and advocates than about any other single concern. “In fact,” Martinez says, “in the last two years, over 37 percent of the complaints we have received are about medical neglect and abuse.”

Julie Schwietert Collazo, a writer and the founder of Immigrant Families Together, an organization that bonds people out of ICE detention and provides legal aid to separated immigrant families, tells Brit + Co that she has heard truly appalling stories of medical mistreatment in ICE detention. The rumors she relayed to us from recently detained women reflect a culture of fear within detention facilities: stories of unnecessary medical interventions and surgeries, and one woman who even used the word “experiment” to describe the goings on.

Khaalid Walls, the Northeast Regional Communications Director/Spokesman for ICE, told Brit + Co over email that “any allegation that ICE is engaged in any medical experimentation at its detention facilities is categorically false,” and asked us for information so as to follow-up on the alleged instances of malpractice.

Meanwhile, DMSC has heard of pharmacists treating detainees in lieu of a medical doctor, Dicker told us. He added that “ICE and the private prison companies that house people generally treat people like commodities, and it does not surprise us that [the detainees’] health and proper medical treatment is not a priority.”

Indeed, lawsuits and other media reports of medical neglect and mistreatment reveal an environment hostile to the physical and psychological well-being of immigrant detainees. Myriad allegations of severe abuse and neglect range from denying detainees proper food to shackling pregnant mothers.

Victoria López, senior staff attorney with the ACLU’s National Prison Project, told Brit + Co that “some of the care, or lack of care, that people receive in custody has been shocking.”

One of the most shocking and disturbing allegations to emerge from ICE detention after news of family separations broke were of immigrant minors being drugged after they were detained — ostensibly, and allegedly, to calm these children down, according to reporting by Reveal News. A lawsuit filed by the Center for Human Rights & Constitutional Law claimed in April of this year (prior to the implementation of the family separation policy) that immigrant children held in detention, including the Shiloh Treatment Center in Texas, were routinely forced to take psychotropic drugs to manage their psychological trauma. The administration was ordered by a federal judge to stop this practice in July.

Remarks from immigrant rights advocates echo complaints of a group of detained immigrant mothers who claimed in 2015 that instead of receiving proper medical care for ailments such as broken bones, they were told to “drink more water.” The same group of mothers also claimed that people in detention were stressed to the point of attempting suicide.

Medical neglect also allegedly led to a number of recent detainee or recently-released detainee deaths, or life-threatening conditions. Morales-Ramos is one such victim, and there have been more tragic deaths since his. Earlier in the summer, a Guatemalan toddler died weeks after being released from ICE detention. The family alleges that the child died because of inadequate medical care in detention. A five-year-old girl who was held in Border Patrol detention in McAllen, Texas, this summer nearly died due to alleged medical neglect as well. The child was sick with a “common illness,” the Intercept reported, that is easy to diagnose and treat but can be deadly if it is not addressed in time. The OIG told the Intercept that the recommendations named in the report would be “complete by the end of 2018.”

Suicide has been no small issue for immigrant detainees in the past and under the Trump administration, as well. An immigrant ICE detainee from Mexico who was diagnosed with schizophrenia and bipolar disorder completed suicide at the Stewart Detention Center in Georgia in July of this year after he was held in solitary confinement for 21 days. At Adelanto, one detainee died of suicide by hanging last year.

According to Human Rights Watch, more than 50 percent of deaths in ICE detention facilities between December 2015 and April 2017 were caused in part by “poor medical treatment.” At least 150 people died while in ICE detention between 2003 and 2015, according to a 2015 report published in the International Journal of Environmental Research and Public Health.

Though abortion is a safe and necessary medical procedure protected by the Constitution, the Trump administration is arguing that it “has a strong, legitimate and profound interest in the life of the child in the womb.” Brett Kavanaugh, the highly controversial Supreme Court justice nominee, unsuccessfully attempted to stop an undocumented teen girl from having an abortion in 2017.

But pregnant women in ICE detention facilities have also claimed that severe medical neglect caused them to miscarry. According to a terrifying July report from BuzzFeed News, pregnant women in multiple immigrant detention centers alleged that they were denied access to doctors, put in shackles (sometimes around their stomachs, even during the second trimester) during transit, and other abuses that fall desperately short of suitable care for pregnant women. Despite the sworn testimony of former detainees, ICE said in a statement to BuzzFeed News that “all detainees, determined to be pregnant, are provided appropriate education, pre-natal care, and post-natal care. Such care includes referral to a physician specializing in high-risk pregnancies when high-risk pregnancy is indicated.”

Behind all of these reports of neglect and abuse, Liz Martinez says, is the desire to make money.

“To turn a profit,” she says, “private prison companies try to cut costs on essential things such as health care — all at the expense of the lives of immigrants.”

All doctors and dentists at ICE facilities are employed by the ICE Health Services Corps (IHSC). According to its website, IHSC is responsible for providing the medical, dental, and mental health care of over 13,500 detainees housed at 21 designated facilities across the US, as well as “case management and oversight” for some 15,000 detainees housed at “approximately 119 non-IHSC staffed detention facilities across the country.”

Though ICE and DHS are technically accountable to Congress, the House committee tasked with ICE oversight hasn’t held a meeting in years. Effectively, there is little accountability that ICE is held to. And though mid-term elections are coming up soon, there is no guarantee that Congress will flip in favor of the Democrats, which would leave Trump ostensibly free to do what he wishes.

Meanwhile, Schwietert Collazo tells us that she has heard “a litany of horror stories” while working with families who were forcibly separated at the border under the administration’s “zero tolerance policy,” and says that “there is no low bar” for the current White House administration.

“Just when you think it can’t get any lower,” she warns, “it does.”

Elizabeth King
Elizabeth King is a politics, history, and culture writer based in the Twin Cities. She is generally pretty cranky but still enjoys traveling, music from the early 2000's, and plotting the resistance. Feel free to say hi on Twitter at @ekingc or check out some of her work at www.elizabethcking.com.
Controversy
Current Events
Controversy Immigration Politics
More From Current Events