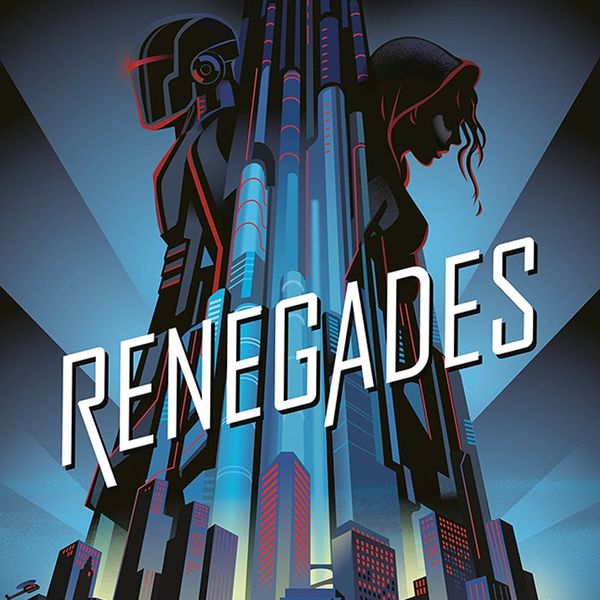 While we love catching up on our favorite fall TV shows, nothing's quite as cozy as curling up with an engaging new book on a chilly autumn evening. So for all of our fellow book nerds looking for a few new goodies to add to their never-ending to-read pile, here are 12 brand-new young adult books to pick up in November.
Renegades by Marissa Meyer ($20): New York Times bestselling author of The Lunar Chronicles and the Stand Alone novels Marissa Meyer is taking the literary world by storm once again with a new high-stakes novel. This time we join the Renegades, an organization of people with extraordinary abilities whose goal is to establish peace in crumbling societies. Unfortunately, not everyone welcomes the Renegades' help — including Nova, whose allegiance is to the villains that the Renegades overthrew. You can bet this action-packed tale of vengeance will top almost every book blogger's YA charts this month.
Frankie by Shivaun Plozza ($18): When Frankie Vega is contacted by a mysterious boy who claims to be her half-brother, her desperate attempt to forget the past becomes nearly impossible. Now he's missing, and Frankie is the only one dead-set on continuing the investigation in Shivaun Plozza's fantastic debut young adult novel.
Whichwood by Tahereh Mafi ($18): With her mother dead and her father driven mad by grief, Laylee is now the only remaining mordeshoor in Whichwood, which means she's destined to scrub the skins and souls of the dead to prepare them for the afterlife. Overworked and exhausted, Laylee gets a burst of new life when a pair of familiar strangers appear in this Persian fantasy companion novel to Mafi's bestseller Furthermore.
Fierce by Aly Raisman ($19): From her first gymnastics stint as a toddler in a "mommy and me" class to a champion on the Olympic podium, Fab Five member Aly Raisman's journey to gold medal success was anything but easy. In her new memoir, Raisman details the many obstacles she's faced along the way to international fame, gives fans a behind-the-scenes glance at two Olympic games, and shares excepts from her personal journals that she's kept throughout childhood.
Rosemarked by Livia Blackburne ($18): After training her entire life to be a healer, Zivah falls victim to the deadly rose plague and knows it's only a matter of time before it takes her life. But while she's hiding in isolation, she joins forces with a revenge-driven rebel soldier on a mission to spy on the capital.
The Becoming of Noah Shaw by Michelle Hodkin ($19): YA fans loved the New York Times bestselling Mara Dyer novels. Now, after years of not-so-patiently waiting, fans are delighted that Michelle Hodkin is back with a new companion series told from Noah's point of view. In this new novel, Noah and Mara are back for another adventure that will answer all the burning questions you still have from the last trilogy.
This Mortal Coil by Emily Suvada ($19): In a world where people are implanted with technology that allows them to recode their DNA, Catarina is something of a gene-hacking guru. In this new novel, Cat must use her skills to decode her deceased father's message, which contains a vaccine for the plague that's bringing humanity to the brink of extinction.
Not Now, Not Ever by Lily Anderson ($19): Elliot Gabaroche is not going to follow in her family's footsteps by attending the Air Force summer program. Instead, she's starting over as Ever Lawrence and attending a cutthroat academic-decathlon-like completion to win a full scholarship to the only college with a science fiction literature program. In this delightfully geeky companion to The Only Thing Worse Than Me Is You, Lily Anderson reminds readers young and old to sprint out of their comfort zone and follow their dreams.
No Saints in Kansas by Amy Brashear ($19): In this highly anticipated new work of historical fiction, Amy Brashear tells a fictional reimagining of Truman Capote's In Cold Blood. After a town is shattered by the quadruple murder of the Clutter clan, teenagers Bobby and Carly dive headfirst into the murder investigation.
The Chaos of Standing Still by Jessica Brody ($18): Thanks to a fast-moving blizzard, Ryn finds herself stuck in the Denver International Airport on New Year's Eve… AKA the anniversary of her best friend's death. Even though it's been a year, Ryn can't bring herself to open the one unread message from her BFF. When she accidentally swaps phones with a stranger at the airport, she'll start a chain of events that will take her on a night-long adventure she won't soon forget.
Kids Like Us by Hilary Reyl ($18): Martin is an American teenager on the autism spectrum who's living with his mom and sister for the summer. Soon after arriving in France to be with his family, he falls for a girl who he believes to be a real-life incarnation of a character in his favorite book. This powerful new novel by Hilary Reyl explores love in many forms and needs to be on your fall reading list.
Here We Are Now by Jasmine Warga ($18): After not knowing the identity of her father for her entire life, Taliah Sahar Abdallat finds a shoebox full of old letters from rock star Julian Oliver. She decides to write to the indie singer, and after years of no response, Julian randomly appears on Taliah's doorstep and asks her to go on a road trip with him to say goodbye to his dying father.

Ashley Macey
Ashley Macey is a lifestyle freelance writer who loves all things fitness, wellness, and creativity. When she's not exploring her home in the Pacific Northwest with her dog Max, you'll probably find her curled up with a good book and some hot tea. Follow her daily jaunts on Twitter.
Books
Creativity
Books
More From Creativity