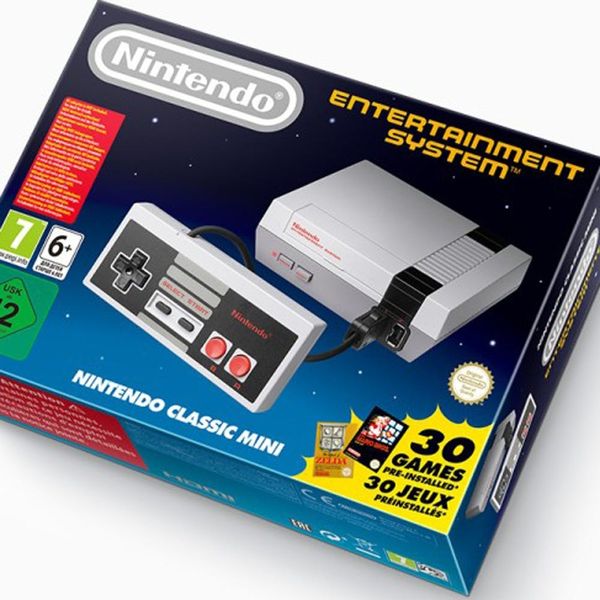 Let’s rewind to your routine in elementary school: You came home from school, grabbed a Capri Sun (thank god for the adult version) and some Dunkaroos, did your homework like the responsible kid you were and THEN went over to your friend’s house to play some classic Nintendo games like Duck Hunt and Super Mario Bros — those yellow stars were freakin’ awesome. It’s time to relive that childhood, because everything old is new again. Nintendo is bringing back the classic NES in one adorable little package.

Nintendo just announced that it is bringing back 30 of its classic games on the NES Classic Edition ($60) later this year. The mini entertainment system will connect to TVs via HDMI cable or Wii systems. But the coolest thing about the system is that it brings back all the childhood nostalgia with none of the mess. You don’t have to replace cartridges or blow the dust out of them when games stop working. Everything is pre-loaded and compact.

And the list of games reads like something straight out of our memories. Highlights include Balloon Fight, Donkey Kong, Dr. Mario, Galaga, Mario Bros., Mega Man, Metroid, Pac-Man and The Legend of Zelda. It won’t ship out until November, but OMG, can’t wait! We’re going to spend all of after-work hours planted in front of the TV as we revisit the late ’80s.

Will you buy the new NES when it comes out? Let us know @BritandCo!

(h/t The Verge; photos via Nintendo)

Cailey Rizzo
Cailey is a junkie for all things pop culture. She studied journalism and English literature at SUNY Purchase, then continued studying French cinema and literature at Paris IV Sorbonne. She currently lives in New York where she can often be found singing '70s music at karaoke bars.
Games
Tech
Games Nostalgia