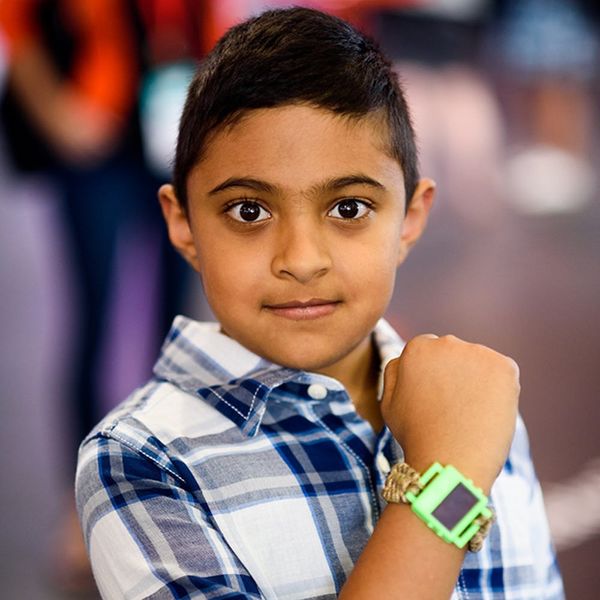 This year’s Re:Make was overflowing with creativity and innovations in tech, business and thinking.

That eight-year-old is Omkar Govil, and he shared his genius product, O Watch, with Brit, HGTV’s John Colaneri and the entire Re:Make crowd while stealing the show in the process.

Haven’t heard of the O Watch? Have no fear — we’ve got all the details you need to know before the need-it-for-my-kid(s)-now feels kick in.

The O Watch, currently raising funds on Kickstarter (it has already surpassed its goal with more than two weeks to go, FYI!), is a 3D printable smartwatch kit for kids.

Why is that cool exactly? Well, with Omkar’s kits, your children will be receiving a double whammy of activities. They will be introduced to and learn about programming and 3D printing through essential building components equipped with easy-to-follow instructions while also participating in a side of DIY c/o paracord watch bands. DIY electronics — that’s something we will always get behind!

The eight-year-old pushed to create his own smart product after being inspired by fellow young inventor Quin Etnyre of Qtechknow. After Omkar contemplated what that product would be, his Arduino-running open-source prototyping platform was born. With it, kids are able to create all kinds of programs on the 3D printed wearable. Featuring programmable games like Rock, Paper, Scissors and utility features like a compass and even temperature and humidity sensors, the platform allows your own tiny genius to make their own smartwatch without ever begging for an Apple Watch again. At least until their teenage years ;)

Want to see Omkar and the O Watch in action? Head to the World Maker Faire happening September 26 and 27 in New York City. Until then and afterward, keep up to date with the O Watch’s progress on Kickstarter, counting down the days until you can gift one of these build-a-smartwatch kits to your child (heads up: estimated ship date is February 2016).

Would your kiddos be into this DIY smartwatch? Sound off in the comments below!