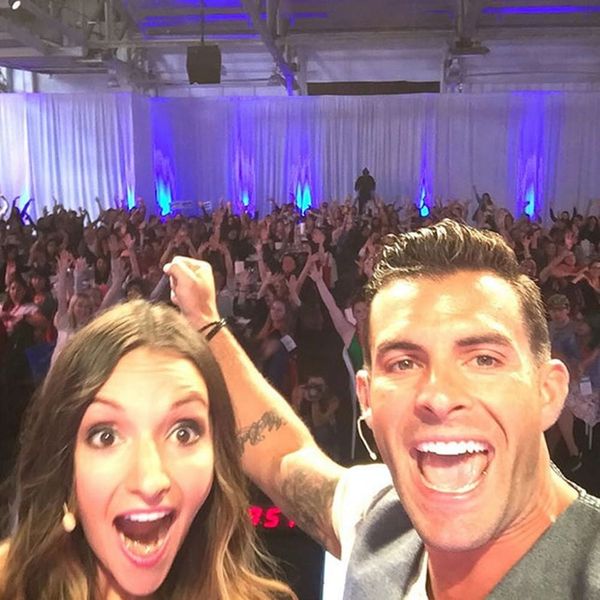 ICYMI, we had a pretty epic weekend over here at Brit + Co. On Friday we hosted our third annual Re:Make, a two-day event that explores technology, creativity and the future of making. The first day was a creative conference that came complete with watercolor painting, a BUNCH of career advice, some creativity tips and not one, but three musical performances. Then the next day the space at SF’s Fort Mason was transformed into a giant maker fair with over 100 maker booths and a bunch of free DIY stations. Whether you missed the event or you want to relive it and all its epicness, check out these 27 snaps from the major weekend.

1. Breakfast First: Before we fueled our minds, we had to make sure to fuel our bellies. Guests arrived to this sweet display from the all-star bakery, Craftsman and Wolves. (Photo via @bhaberl)

2. #IAMCREATIVE Foundation Winners: After Brit welcomed everyone she brought up these ladies who were our finalists in our #IAMCREATIVE foundation. They thought just one of them was going to win the grant money they applied for, but we surprised them by announcing them all as winners! Read more about each of these ladies here. (Photo via @britandco)

3. 500 Person Selfie: John Colaneri of HGTV’s Kitchen Cousins was our Brit + Co-host for the day. He kicked things off Ellen style by getting a selfie with the audience. (Photo via @colanerijohn)

4. Watercolor Doodles: All conference attendees were supplied a watercolor notebook and paints and encouraged to doodle throughout the day. The results were totally gorgeous. (Photo via @friendsofhadley)

5. Man Buns of Re:Make: Special shout-out to Sarah Walsh who made this EPIC illustration of the all the man buns she spotted at the conference. (Photo via @sarahwalshmakesthings)

6. Todrick Hall: MTV’s Todrick Hall joined us as Brit + Co’s social media correspondent. Throughout the day, he awarded special goodies to attendees who posted the coolest tweets and Insta pics. (Photo via @beaconadhesives)

7. Cassey Ho: Youtube fitness star, Cassey Ho came and chatted with us about how she forged her own career path and even showed off one of her trickiest pilates moves. (Photo via @blogilates)

9. Google Code Truck: At this cool station guests were able to apply code that creates an LED pattern on a dress that’s currently at fashion week. (Photo via @russchampagne)

10. Brit + Co Fanny Packs: If you spotted a staff member over the weekend, chances are they were rocking this sweet geometric fanny pack that was designed by *us* in collaboration with Avenue Dee! (Photo via @avenuedee)

11. Bonnie McKee: Singer/songwriter, Bonnie McKee joined us both days at Re:Make. She gave a performance at the conference and participated in a musician panel with Lindsey Sterling and Lindsay Ell. Then she came back the next day to perform for everyone at the festival and totally rocked out. (Photo via @bonniemckee)

12. Jen Gotch: The super cool girlboss and founder of Ban.do came to chat with us about her successes and failures and even admitted to us that it’s A-okay to cry at work. (Photo via @miranda_cheng)

13. Sophia Rossi: Sophia Rossi, one of the founders of Hello Giggles, came to chat with us about her BFF, Zooey Deschanel and what it was like to work on some little-known reality shows, The Hills and The City. (Photo via @britandco)

14. 3D Printed Chocolate: Oh ya, did we mention there was also 3D printed chocolate? NBD. (Photo via @brit)

16. Festival Day: After the conference wrapped the space was transformed into a maker festival, say hello to some seriously epic signage. (Photo via @livecolorfulco)

17. Crayon Wall: At Crayola’s make station (which came complete with thread wrapped bracelets and airbrushed tees), we had a photo booth backdrop that featured 8,000 (!!!) crayons. (Photo via @britandco)

18. Glitter Tats: Over at Sizzix’s DIY station, they took temporary tats to the next level with these sparkly glitter tattoos. (Photo via @vintagebutterfly)

19. Macaron Manicures: Ladies (or dudes) who found themselves in need of a quick gel manicure tried out Le Mini Macaron, a DIY gel nail kit that’s shaped like our favorite French dessert. (Photo via @whatthefluffs)

21. Tote Bag Stamping: Over at Michael’s DIY booth, attendees made hand stamped totes to carry all their new goodies home in. (Photo via @michaelsstores)

22. 80-Foot Coloring Wall: As you entered the festival, you were greeted with a 80-foot coloring page that was just as fun to color in as it was to snap photos of. (Photo via @giefish)

24. Painted Beads: Madeline Trait was one of the many makers at Re:Make who’s talented was totally blowing our minds. I mean just look at her handpainted beads. (Photo via @tweetsweet)

25. Hershey 3D Photobooth: Hershey and Smilebooth joined forces to create this epic photo booth that captured your pic from all sides creating a super cool, 3D-effect. (Photo via @punkpostco)

26. Maker Booths: We’ll take one of everything, please. (Photo via @britcastellano)

27. #Girlboss Pic: As day two came to an end, Brit, Jen Gotch (of Ban.do), Jordan Ferney (of Oh Happy Day!) and Jesi Haack (who helped us make the event look beautiful) had a chill moment with our hashtag. (Photo via @jengotch)

And that’s a wrap folks. See you next year!

Were you at Re:Make this year? Share your favorite moment with us in the comments below.

Cortney Clift
Cortney is the senior writer and special projects editor at Brit + Co. She typically covers topics related to women's issues, politics, and lifestyle. When she's not buried behind her computer you'll find her exploring New York City or planning her next big adventure.
Re:Make
Home News
Re:Make