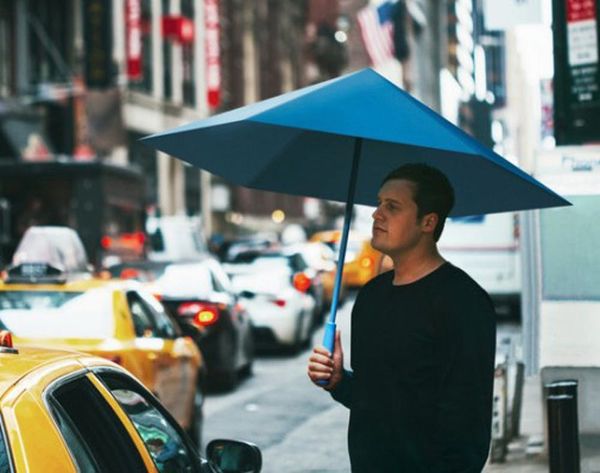 When it comes to umbrellas, it’s rare that fashion ever meets function. Trendy parasols barely last more than one season, while hardcore, heavy-duty canopies can be a bit of an eyesore. Thankfully, we’re only one Kickstarter project away from a pretty awesome solution. And that rainy day solution is called the Sa. The Sa is a geometric umbrella that challenges the traditional structure, form and aesthetic of an ordinary umbrella with an alternative that not only looks and works better, but is also environmentally friendly. So, if you’re into thoughtfully made gadgets that are good for the world, this is for you.

The Sa’s minimalistic design is inspired by the Japanese art of origami. The umbrella has absolutely no wires underneath the canopy, which sets it apart from the majority of umbrellas on the market. Using plantar tension, Sa’s designers sketched a structure that could expand and contract in unison, without having to rely on other parts. If it sounds flimsy to you, it’s not. Thanks to six guiding panels on the outside, the Sa is able to not only open and close, but also provide strong structural support from the very top of the canopy to its outermost edges.

Activating the Sa is simple, too. Just rotate the bottom of the handle to launch the spring, which opens the umbrella. To close, just pull on the handle like you would with a bicycle pump or pinball machine. The handle will then retract, closing the umbrella. To ensure the umbrella won’t all of a sudden open up on the bus or on the sidewalk (or wherever you are when you want to keep your umbrella shut), they’ve embedded magnets along the perimeter of the panels.

And if the Sa’s gorgeous and effortless design isn’t reason enough to want one, perhaps the fact that it’ll be made out of recyclable materials is. Sa’s creators envision their umbrella being manufactured with highly recyclable, waterproof plastic. And it won’t be boring-colored plastic either. Funders will be able to choose from cyan, yellow, magenta, black, gray and white.

If you’re interested in making the Sa an essential in your rain gear, head to their Kickstarter and make a pledge of $69. They estimate the first deliveries of the Sa to be in February or March of 2015 — just in time for April showers.

Is the Sa the umbrella of the future? Tell us what you think!

Sara Tan
Sara Tan is a lifestyle writer and editor who is obsessed with all things fashion, food, and pop culture. She's originally from LA, but recently relocated to Oakland, CA. When she's not sitting behind her laptop, you can find her shopping sales, spinning at SoulCycle, or exploring her new city with her French Bulldog by her side.
Art
Tech
Art Kickstarter