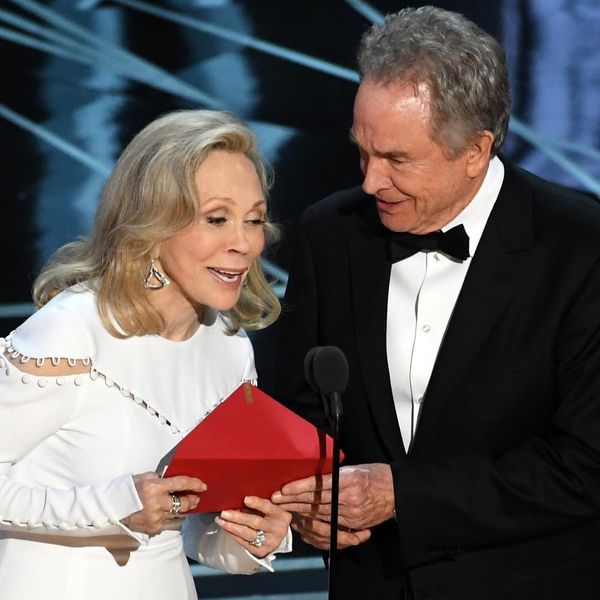 The Academy Awards are still a few months away, but the people behind the scenes are already getting us excited for our next Oscars party by releasing a trailer for the 2018 event. And it just happens to poke fun at *that* infamous Best Picture mistake, when Warren Beatty and Faye Dunaway received the wrong envelope and announced La La Land, not Moonlight, as the winner of the night’s biggest award.

We wouldn’t blame the Academy if they wanted to do everything in their power to distance themselves from the epic flub, but they’ve decided to take another tactic: They’re leaning into it!

After taking us through some of the year’s biggest films — including Wonder Woman, Girls Trip, Get Out, Lady Bird, Guardians of the Galaxy Vol. 2, Beauty and the Beast, Baby Driver, and The Post — the trailer takes us back to that jaw-dropping moment when confusion reigned among the industry’s biggest stars.

In the clip, as Beatty begins to announce the winner — and host Jimmy Kimmel asks into the mic, “Warren, what did you do?” — there’s a brief break in the accompanying music before the singer returns, belting out, “Whatever they do, we do it better!” (Let’s hope that’s not just a cheeky joke, but also a promise that things will go a little smoother this year.)

The trailer also promises that there will be “bigger skills, bigger thrills, and bigger chills,” along with the best glamour, better surprises, and moves that sizzle.

Are you excited about the 90th Academy Awards? Let us know @BritandCo!

Desiree O
Desirée O is a ‘Professional Bohemian’ who loves anything and everything related to the arts, entertainment, and pop culture. She ADORES being a ‘Newsy’ for Brit + Co, covering all of the latest tidbits of awesomeness that you want to read about. When she’s not writing, she’s either making messy art, going on long adventurous walks with her camera, or poking around over at bohemianizm (http://www.bohemianizm.com/). You can find out about Desirée O and her work at http://DesireeO.com/ or follow her on Twitter @DesireeO.
Oscars
Pop Culture
Oscars