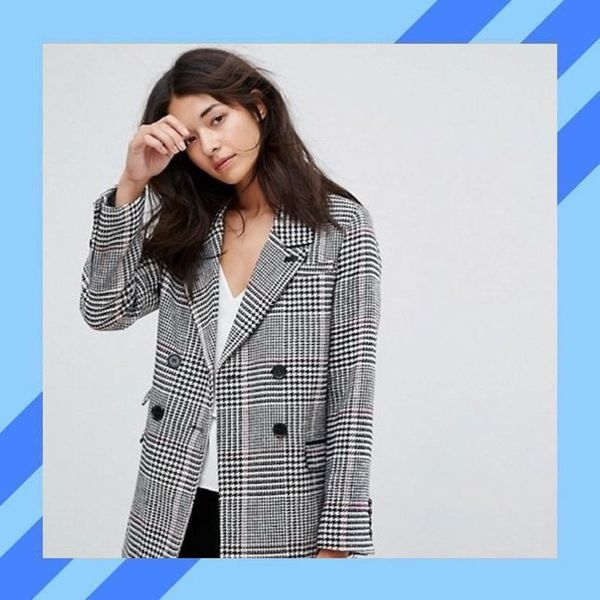 It feels like everywhere we look these days, we spot the '80s-style plaid blazer. A scroll through street style or your Insta feed or a walk by a store window is sure to reveal some iteration of the retro revival. While it's unclear what exactly prompted the reemergence of the power blazer — current political climate? nostalgia? — the undeniable fact is this piece is fall's official wardrobe MVP. Take a stroll down memory lane and see why we have always loved the plaid blazer, and where to snag the 2017 version for yourself. (Photos via Edward Berthelot/Getty, Edward Berthelot/Getty, Christian Vierig/Getty)
As Tess McGill in Working Girl, Melanie Griffith had a head for business and a body for sin — and the shoulder pads to make people take her seriously as she masqueraded as her boss. We loved her immediately. Let the river run, girl. (Photo via Twentieth Century Fox)
Saturday mornings in the '80s would have been nothing without Pee-wee's Playhouse. The "Word of the Day!" Cowboy Curtis! Chairry! And, of course, the iconic gray plaid suit. (Photo via John D. Kisch/Separate Cinema Archive/Getty)
The John Hughes movie catalog was pretty much the soundtrack of the era — and Molly Ringwald our reigning queen. The blazer game was particularly strong with Pretty in Pink, as almost every male character (and some female) sports one throughout the film. (Photo via Paramount/Getty)
Clearly, Raf Simons was feeling the nostalgia for his first collection at the Calvin Klein helm. He sent model after model down the catwalk in updated versions of the broad-shouldered '80s blazer, officially solidifying the trend. (Photo via Edward James/WireImage)
Go totally old-school in the AQUA Plaid Double-Breasted Blazer ($138). Button it up or wear it open over your favorite graphic tee or slip dress.
Classic Prince of Wales Check plays very nicely with edgier fabrics like vinyl and leather. Make your own perfect mashup with the Missguided Grey Checked Blazer ($73).
Style tip: Try a below-the-hip style like the Na-Kd Checked Oversize Blazer ($59) with ripped jeans or OTK boots for a sexy take.
Mix your old favorite buy and your new fave trend at the same time with the Style Mafia Lotta Plaid Bell-Sleeve Blazer ($189). Total win-win.
The frayed hem of this Mango Check Structured Blazer ($170) adds a punk touch to the tailored menswear vibe. We dig it.
Were so here for the long length and single button closure of the Zara Double Breasted Checked Blazer ($119). It's the piece you'll live in all season long.