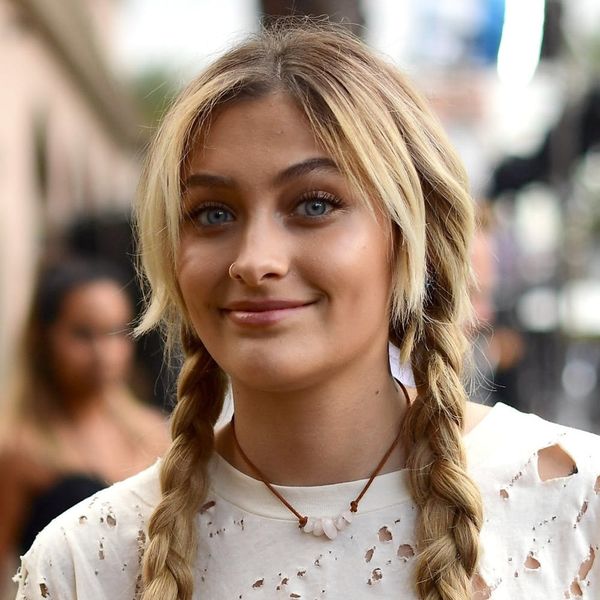 Paris Jackson may be an IMG model (she JUST signed on as the new face of Calvin Klein), but when it comes to her personal style, girl wears what she wants. AnyWHERE she wants. And just in case there was any confusion about that fact, she made it crystal clear when she showed up to the MTV Movie & TV Awards red carpet clad in ripped jeans, a flannel shirt, Converse sneaks, and a holey tee — featuring Michelle Obama’s face.

Not only was the look the most lax we’ve seen on any red carpet this year, but it also kept the political sentiment that reigned supreme throughout awards season (you may recall the signs of protest seen at the SAG Awards and the ACLU pins taking over the red carpet at the Oscars) alive and well.

While we’re uncertain if she was simply feeling the comfy AF look, which included the phrase, “Michelle My Belle” (no doubt a nod to The Beatles’ song of the same name) on the tee, or was making a more poignant remark with her refusal to get all dolled up when important issues are still up in the air (like, say, the current Republican AHCA bill), her support of the former First Lady and her ideals couldn’t have been more clear.

As Teen Vogue notes, it’s ironic that the phrase would wind up on a shirt celebrating Obama, as it was one that was initially used against her in a presumably condescending manner by Rush Limbaugh, much in the way the phrase “Nasty Woman” was flipped after being used as an insult to Hillary Clinton by President Trump.

Whatever her motivations, kudos to Jackson for never being afraid to march to the beat of her own drummer.

What do you think of Paris’s lax look? Tell us over @BritandCo.