How to Solve Your Quarter-Life Crisis in a Weekend 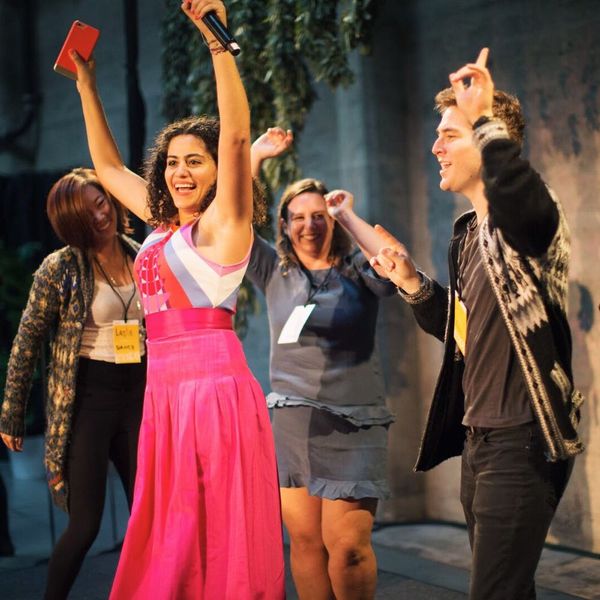 There’s never a dull moment in the City by the Bay. At work and at play, San Francisco is alive with buzz around the newest big idea, a new headline-making innovation or Silicon Valley’s latest solution for the woes of the human experience. It seems silly to stand in such a stimulating crowd of technology and art’s most promising vanguards and whimper, “but… I’m great too.”

Yet, here I am. I’m smart, accomplished, and affable. I have ample talent and a great big heart. I’m compassionate, focused and genuinely interested in improving the lives of my neighbors and community members. I’m confident in my skills, organized and driven.

But I also combat vague feelings of dissatisfaction. My professional accomplishments routinely fall just short of my expectations. Outside of my career, I’m subject to swells of inspiration that too quickly dissolve for lack of follow-through. I wish I could do more. I have serious life crushes on a few people in my life who have followed their bliss, and I want to find my calling. I want to pursue my passion – to finally give a shit.

I imagine I’m a lot like you. In fact, I know I am — I’ve heard my own story told back to me time and again.

I left a comfortable job this year after months of feeling under-used. The long hours would have been fine if I felt like I was really being heard or making the best out of my skills. It was a job that held lots of promise — I was helping people, but the whole reality of that position never quite resonated. I relocated too, and am now confronted with a set of the biggest questions I’ve ever dared to ask myself:

“What is the fullest expression of myself?”

A friend recently asked me for the recipe for a butternut squash soup I made for her, and when I wrote it up with footnotes and commentary, she responded, “Have you ever thought about writing a food blog? This is incredible!” Of course I had, but ask me why I hadn’t yet started… More crickets.

I’ve had others ask me for recipes, and even more people tell me how fun it is to cook in the kitchen with me. Even as I wondered about what direction my life would take, I ignored that skill set – dismissed a dream of working with food professionally as unviable, the risks too intimidating to take.

To sum it up for you: I’ve been feeling markedly non-super, un-heroic about this whole Return of Saturn thing — this “quarter-life crisis” people Tweet about. But (newsflash) it’s encouraging to realize I’m not alone. I met my fellow twenty- and thirty-something dreamers at The Passion Co.‘s inaugural Start Conference — people facing similar self-constructed obstacles and some folks who had cleared those hurdles. Like this guy named Smiley.

Adam Smiley Poswolsky, a 32-year-old once on a fast-track in the corporate world, left his professional life of security and comfort to pursue his passion for writing. He self-published his story of inspiration, doubt, struggle and ultimate triumph in “The Quarter-Life Breakthrough,” which became an Amazon.com best-seller and earned him a publishing deal with Tarcher Perigree to bring the book to a wider audience.

Smiley’s story made him the perfect mentor for the purpose-driven, mission-minded, starry-eyed attendees at Start who convened at Dogpatch Studios to find their missions, to dream big, to start somewhere. They (we) came together to hack our passions. Or did we?

But! I thought. Passion! Find your passion! What about scrapping it all to follow your dreams?

“People who tell you ‘quit your job, it’ll happen if you want it badly enough!’ are doing a disservice,” Smiley told us. “Maybe that’s the way it’ll work for you, but most people have to make sacrifices as they honor their purpose. No one’s done great things without being rejected time after time.”

That’s a big word: “sacrifice.” Another one: “rejection.” But also in there: “honor your purpose.”

“The common thread that draws these people together today is authenticity — these are people who have stepped fully into being who they are in the world. They don’t hide or play it safe,” said Jessica Brown, The Passion Co.’s Program Director (check out our profile of Passion Co.’s founder Jessica Semaan here). “They say ‘this is who I am, this is what I care about.’ It doesn’t mean they’re perfect or enlightened,” she added, with a knowing laugh.

“I was nervous about sharing my passion because everyone else wants to save the world!” said Missy Titus, a 27 year-old product designer living in Oakland, CA, who attended the conference with me. “I just want to help young designers get ready for good jobs!”

That’s who she is, that’s what she cares about. I got to know Missy as one of the people in my “tribe,” which was a tool employed at Start to bring together different types of self-starters in small groups to discuss the weekend’s program in real time, and to get some feedback on our various projects. It was a method to present these driven (if slightly aimless) young people with real accountability. The Start Conference is like no other conference you’ve been to — it’s a lot like… a self-hackathon.

Missy doesn’t want world peace (well, she definitely does, but that’s not her project…). She just wants to connect with people like herself, with struggles that are real and can seem insurmountable.

I can relate to that. I’m almost always comfortable in a kitchen (mine or someone else’s), and I love showing people that it doesn’t take years of culinary school or some divine gastronomical inspiration to know your way around a cutting board. I’m not going to end world hunger, but I could help someone bring a little more meaning and a few more smiles to a meal.

“I had a lot of reservations talking about my idea project because it felt a little selfish,” Missy told me. “It occurred to me this weekend that, if I don’t do this, no one is going to.”

There were a lot of tech folks like Missy at Start Conference — that was no surprise. Some of the most excitable and cheery starters this weekend were home bakers and makers though. A few brought prototypes of their projects and giggled as they shared them with strangers.

With aubergine-purple Dr. Martens and a magnetic personality, Terry H. Romero, Food and Craft Outreach Lead at Kickstarter, made a remarkable impression on the Start stage. “It’s not easy or quick, but it is powerful,” Romero told us, dispelling the myth that a Kickstarter campaign is a simple way to make a buck for your weekend hobby. “It’s an awful lot of work, and there is a lot of accountability to your backers. It’s the beginning of a process that will hopefully last.”

The decision to live a life of passion is fraught with paradox and can seem imbalanced — unfair even. Fairness isn’t the point, though, and the idea that I could find purpose in something that doesn’t become my career became comforting. Over the course of the weekend (and since then), I’ve offered up the story of my experience to other people in my life, and have started to become responsible for my own progress.

More than anything, I perceive my purpose with a more realistic perspective, and a more measured approach. Who says I need to be a chef to work with food? Maybe the product itself isn’t the point. Instead of cooking for people, it occurred to me I might cook with people. That’s much closer to what I love about food in the first place. That’s a more authentic expression of my passions and skills. Establishing a business model, creating a website, seeking a customer base and eventually following through on a bunch of big promises becomes less terrifying when I remember this: Someone out there is waiting for me to step up to the challenge.

Maybe they are waiting for me to help them get comfy with their kitchen. I could be one moment of courage away from saving someone’s life… or, at the very least, saving their dinner party. Which, for some, could be a great big deal.

The next steps for this tentative “kitchen coach” (not bad, right?) will be to workshop the idea with a few more people — people whom I trust, even people who have struck out on their own in some way, so they have empathy for my process. With some honest appraisal of my approach (and the acknowledgement of any shortcomings) I may be in a position to figure out the next step.

Imagine this: You’re going about your daily life when you’re struck by the need for something more. You feel the sudden impulse to pursue your purpose, and you’re confronted by the idea that someone, somewhere might be struggling in a very real way, and their life would be made much better with your help — help that only you can provide.

Ring any bells? Sounds to me like a pretty great origin story…

If you had a weekend to work on your passion project, what would it be? Share with us below!

Aubrey Rawlins
Aubrey Mailliard Rawlins was raised in San Francisco and Anderson Valley, California, with lots of exposure to amazing food - from fine restaurants to modest kitchens, always impressed with the local food scene. After a decade in New York City (and countries far and wide), he relocated to the Bay Area to work in wine and agriculture. He's excited to discover the best way to celebrate his love for food and agriculture as a business development consultant for non-profits, foundations and small firms in related fields. Follow his (mis)adventures in food at @gentlemanhomemaker, and reach out if you think he can help you get comfy in your kitchen!
How to Quit Your Day Job
Lifestyle
How to Quit Your Day Job
More From Lifestyle