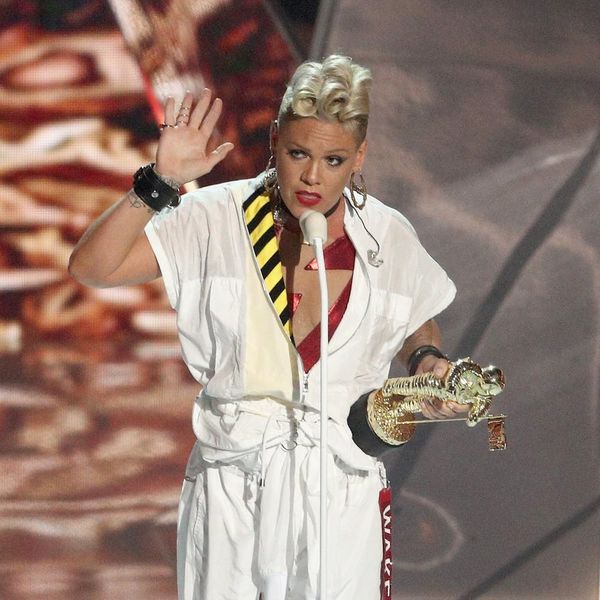 While the 2017 MTV VMAs didn’t get as crazy this year as they have in the past, there were still some important and memorable details — like the speeches by Heather Heyer’s mom, Paris Jackson, and Pink. Turns out, Pink was doing just as much talking with her clothes as she was accepting her Video Vanguard award.

While the “Just Give Me a Reason” singer arrived in a super sharp three-piece suit that just so happened to coordinate with her husband, Carey Hart’s, and her daughter, Willow Sage Hart’s, she changed into something much different for her performance.

You may have noticed the shimmery red bodysuit with a lightning bolt cutout beneath an unzipped white tracksuit. But what you might have missed were the two straps that hung down from her jacket, one of which said “WAKE THE FU*# UP!” and the other, “STAY WOKE!” She also went all “Dear Mr. President” with a strip of tape on her back that simply read, “FUMP TRUCK.” Sometimes it really can be enough to let your clothes say everything.

What do you think of P!nk’s outfit choices? Tell us @BritandCo!

Shea Lignitz
Shea can be found in the nearest bookstore or brewery, exploring the great outdoors, or blasting Led Zeppelin. She grew up in the cold and rain of Northern California's redwoods but is currently wandering around Texas.
Red Carpet