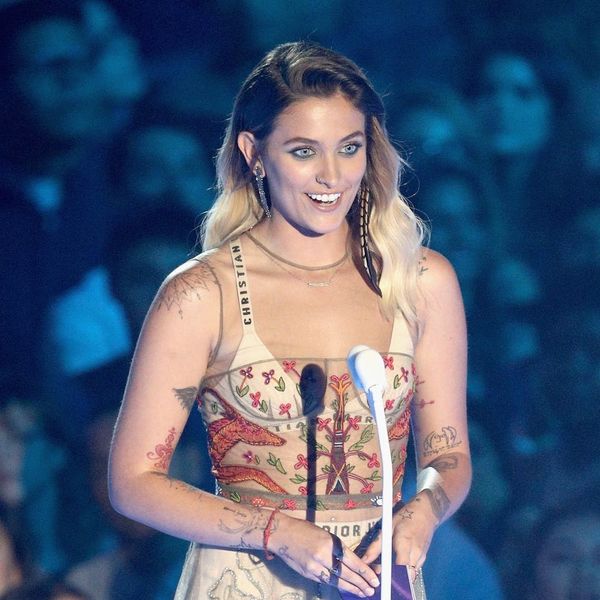 Paris Jackson got the 2017 MTV VMAs crowd riled up, not with a performance but with an impassioned plea to fans during the presentation for Best Pop Video.

Taking the stage to present the first award of the ceremony, Jackson told fans how important it is to work together. “If we were all to put our voices together, can you imagine the difference we would make? If we were to stand up all united as one, our impact, it would be ‘yuge,'” she said, imitating President Donald Trump on the last word.

What followed was a little heavier than what the audience may have been expecting from the usually lighthearted VMAs. “So, let’s leave here tonight, and show these Nazi, white supremacist jerks in Charlottesville, and all over the country, that as a nation with ‘liberty’ as our slogan, we have zero tolerance for their violence, their hatred, and their discrimination,” she continued. “We must RESIST!”

With fans cheering her on, Jackson did a 180 to then announce the nominations for the Best Pop Video. (Fifth Harmony won the Moon Person.) Her words lingered, though: Fan reactions to the speech showed that she definitely struck a nerve (in a good way).

I was not expecting Paris Jackson to call out the white supremacists like that but ok girl, i see you #VMAs pic.twitter.com/ZXRPW8Ywt0

Viewers may not have expected a plea for youth to get organized, get active, and work together for the greater good, but they got one. And on a night that’s usually more about partying than politics, she truly surprised.

What did you think of Paris Jackson’s VMAs speech? Tell us @BritandCo!

Kat Armstrong
Kat has been a writer, social media maven and mom for longer than she's willing to admit. She's also spent time in front of and behind the camera, interviewing celebs, politicians and acting as a producer for fashion and artistic photography shoots. When she isn't writing for various orgs and publications, she's hanging with her kids, husband and French Bulldog, Peter, in Toronto, Canada.
VMAs
Pop Culture
VMAs