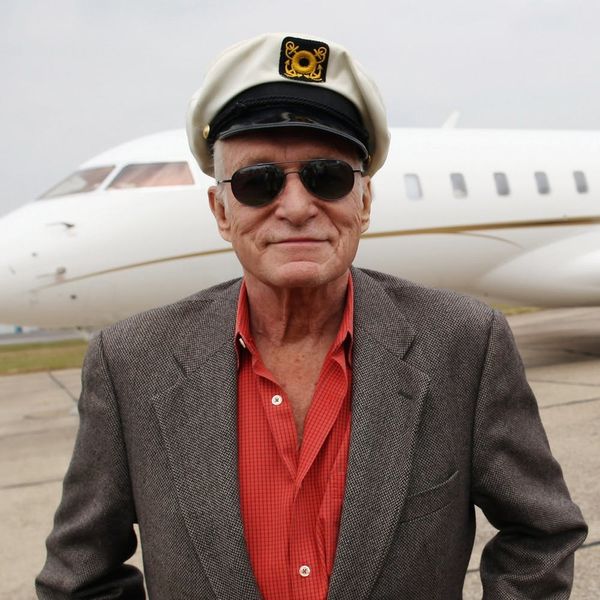 Hugh Hefner, the media giant and founder of Playboy, died of natural causes on Wednesday, September 27, at the age of 91. The magazine’s official Twitter account confirmed the news with a black-and-white photo of the late businessman that featured the quote, “Life is too short to be living somebody else’s dream.”

Hefner, of course, turned his dream into an empire. After getting a degree in psychology and enlisting as an infantry clerk during World War II, the Chicago-born former copywriter published the first issue of Playboy in 1953, when he was 27 — and he never looked back. Over the last six decades, the magazine has featured countless celebs, including Lindsay Lohan, Kim Kardashian, Cindy Crawford, Sharon Stone, Drew Barrymore, Olivia Munn, and Madonna.

Hef, as he was known, also hosted his own TV shows, Playboy’s Penthouse and Playboy After Dark, and launched the Playboy Channel (since sold) and the Playboy Club (which inspired a short-lived NBC series in 2011). More recently, he appeared on E!’s The Girls Next Door with Holly Madison, Kendra Wilkinson, and Bridget Marquardt.

Hefner stepped away from the day-to-day operations of Playboy Enterprises a while ago, but he has always been the (often controversial) face of the brand. Over the years, he made cameos in several scripted shows and movies, including Blossom, Sex and the City, Entourage, Curb Your Enthusiasm, and The House Bunny.

“My father lived an exceptional and impactful life as a media and cultural pioneer and a leading voice behind some of the most significant social and cultural movements of our time in advocating free speech, civil rights, and sexual freedom,” his son Cooper Hefner, chief creative officer of Playboy Enterprises, said in a statement to The Hollywood Reporter after his father’s death. “He defined a lifestyle and ethos that lie at the heart of the Playboy brand, one of the most recognizable and enduring in history. He will be greatly missed by many, including his wife Crystal, my sister Christie, and my brothers David and Marston, and all of us at Playboy Enterprises.”

According to a statement from the publisher’s rep, Hefner died at his home, the legendary Playboy Mansion, surrounded by loved ones. He is survived by his third wife, Crystal Harris, whom he married in 2011, and his four children from previous relationships.

Were you a fan of The Girls Next Door? Tell us @BritandCo.