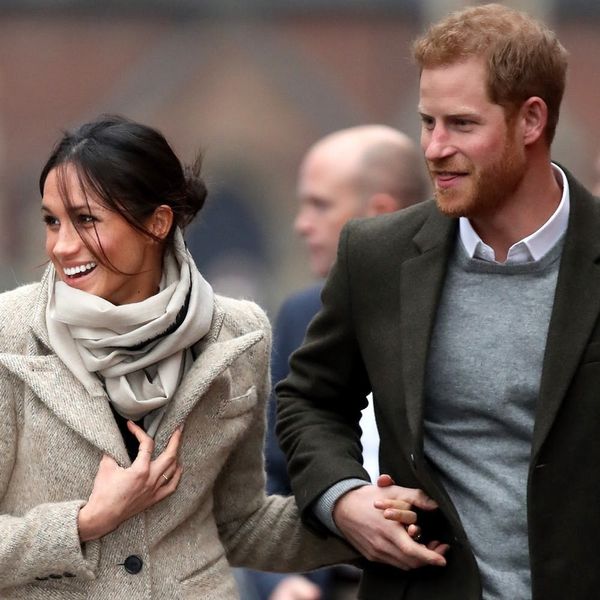 The public was thrilled when Prince Harry and Meghan Markle appeared at the Terrence Higgins Trust World AIDS Day charity fair in December for their very first royal engagement together. Today, January 9, they attended another official engagement — their first of the new year.

Showing up hand-in-hand at Reprezent 107.3FM in Brixton, the lovebirds were all smiles as they greeted the crowd of people who had gathered to meet them outside the station. Both were bundled up for the cold, with Harry wearing a light gray sweater and dark gray coat, and Markle in a Smythe Brando camel coat and a Jigsaw scarf, which she paired with a black Marks and Spencer sweater and flared black Burberry pants.

After shaking hands and talking with some of the well-wishers, the couple headed inside. But first they turned to give a small wave to the crowd, who responded with wild cheers.

Inside, Harry and the Suits alum learned how the station is positively influencing young people with the use of radio and broadcasting training. The newly engaged duo also spoke with on-air presenters and volunteers about how the station uses music and media to make a positive social impact on their community.

Started in 2008 because of the rise of knife crime in the area, Reprezent’s program aims to help young people develop and socialize with the help of radio. According Kensington Palace, more than 4,000 youth have participated to date.

Prince Harry and Ms. Markle chat to young people on the @ReprezentRadio programme about their experiences, and how Reprezent has helped them to develop important skills. pic.twitter.com/zKtJTEZ7g4

The royal wedding is still a few months away, but it looks like Markle is continuing to ease into her new royal duties with all of her natural grace and charm. And she and her future hubby seem to be enjoying themselves every step of the way.

Thank you @ReprezentRadio for welcoming Prince Harry and Ms. Meghan Markle to your station this afternoon! 🎧 pic.twitter.com/PB0xL2Hx6v

What do you think about Prince Harry and Meghan Markle’s first royal appearance of 2018? Let us know @BritandCo!